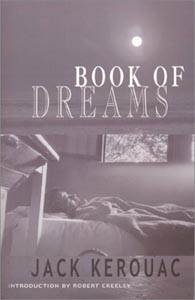 FOUR LONG DECADES of strange dreams and stranger realities have passed since Jack Kerouac took readers on a whirlwind tour of the vast, bizarre landscape roamed by his sleeping mind. First published in excerpted form in 1961, Book of Dreams (City Lights; $17.95) is now out in a new, uncut version that opens a wide window onto the inner life of one of 20th-century American literature’s most extraordinary personalities.

But for Christ’s sake, don’t listen to anyone who tells you to read this book because, like oat bran, it’s good for you.

Of course, Book of Dreams can be read for insights biographical, psychological, and literary. The author of On the Road reveals much about himself in these brutally honest accounts of his dreams, which were jotted down almost immediately after he woke. Sometimes the results were too revealing for his own comfort, as Kerouac explains in his preface: “But an hour later, over coffee, what shame I’d feel sometimes to see such naked revelations so insouciantly stated.”

Readers will meet Kerouac’s withdrawn and disapproving father and ponder the author’s insight that fellow Beat Neal Cassady reminds him of his dad.

Amateur psychologists will enjoy exploring the links between the author’s misogyny (revealed often here) and his anxious relationship with his mother. Beat fanatics will scramble frantically to decode the dreamworld pseudonyms given by Kerouac to such famous friends as William Burroughs and Allen Ginsberg.

But you’ll get more insight into such matters from picking up a good biography of Kerouac–like Memory Babe by Marin County’s own Gerald Nicosia.

No, Book of Dreams is best enjoyed like a fast flight above the clouds, a headspinning trip over a sprawling, shifting mental world of towers and mountains drifting in a great blue emptiness or suddenly darkening into a nightmare of black thunderheads and killer lightning.

Most of Kerouac’s dreams are only a few paragraphs long, usually starting with a sentence like this: “My mother is pregnant and she’ll have to go to Chicago for an abortion.” They go on to offer vivid images of horror, humor, and delight, with events proceeding in the peculiar logic of the dreamworld, which Kerouac captures perfectly. The author becomes unstuck in time and space as places and people real and imagined jumble together in fantastic forms.

See Jack smoke weed. See Jack run from the cops, or hang out with President Eisenhower, or hitch rides on freight trains with his elderly mother. Watch as he finds himself in the dreamworld version of boot camp in the Navy–which he was kicked out of in real life after being labeled a “schizoid personality.”

Sex pops up with the regularity of a stroke book, from fairly explicit passages to encounters like this one: “Then I asked Bertha for a sandwich, considered sex with her, thought of her big figure on the couch.”

There is also plenty of fragmented poetry here: “warm April night–mystery of the West End Bar, the corpse in the Hudson, Edna in a Russian darkness over the campus–I’m almost afraid of marauders in this gloom, look around–Timeless the world waits–I wake up–wondering.”

Particularly poignant are Kerouac’s dreams of ending up a failed writer, a dismally washed-up “beat brother” living back at home. Indeed, nightmares of longing, bitterness, fear, and regret are common in Book of Dreams–and yet this was before the King of the Beats had turned into the movement’s version of an aging Elvis Presley.

But even knowing the end of Kerouac’s saga, the sad death of the dreamer, doesn’t spoil the peculiar beauty and raw excitement of these nocturnal adventures.