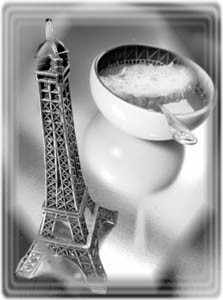 EIGHTY-FIVE percent of Jill Prescott’s students are professionals: doctors, teachers, lawyers. But when they step through that door to Prescott’s Ecole de Cuisine, something strange happens.

“Adults turn into kindergartners when they walk into my school,” Prescott in a interview from her home near Milwaukee, Wisc. “It’s pitiful. I think it’s specifically French cooking. It’s so intimidating. It’s known for being the best cuisine in the world. But it’s easy once you know the rules.”

Those rules form the substance of Prescott’s new book, Jill Prescott’s Ecole de Cuisine (Ten Speed Press) and the show by the same name that began airing earlier this month at nearly 100 PBS affiliates around the country. The book is explicit and no-nonsense, almost stern as to technique, and the TV show puts the viewer as close as you can get without actually putting your nose in the pan. If taken together, the Prescott école approach retains Prescott’s friendly Midwestern attitude, yet it is as rigorous a regimen as any Saturday cooking show for dedicated home cooks to learn basic French technique.

Prescott herself learned the really hard way over the course of several years of frequent visits to France starting in 1986. Before that, she had trained with the U.S. representative from Le Cordon Bleu, which had been a reprieve from her previous experience with French food through a series of bad books. “The books didn’t make any sense. I had no idea what they were talking about. Like, do a crème anglaise until it leaves a trail [if you coat a spoon with it and run your finger down the back]. Mine would do a trail for the first minute, but it was all watery, and then if I cooked it too long it turned to scrambled eggs. Now, that is the type of thing, especially on the show, I can clearly show people what it is.”

Of course, even in TV-Land you don’t start with desserts. Prescott begins with the savory building blocks of classic French cooking-stocks, sauces, sautés. Oh, wait, does even the word sauté make you nervous? It’s just a fancy word for a quick pan-fry on high heat, proving that the same techniques that go into the most delicate nouvelle cuisine can also be applied to a plate of steak and fries. “Even people who don’t want to fuss in the kitchen can learn some good techniques,” says Prescott.

Asked for some tips on sautéing, Prescott reels them off in a perfectly practiced, front-of-the-class spiel: hot pan, dry piece of meat at room temperature. Flip it over when it turns the color of cinnamon, nice and dark golden brown. You test it with your finger, using a method that Prescott illustrates both in her book and on TV, not with a meat thermometer and definitely not by cutting into it.

“We’re all guilty of doing that, but you must not do it. You’re draining away the juice,” she says. “Oh, and don’t flip the meat over and over. You toughen it dramatically if you do that. The juice always moves up to the top of the steak, and all the flipping dehydrates it.”

Show-and-tell is Prescott’s specialty, a teaching strategy that actually takes some thought to translate from a classroom to mass media. “Doing the book was the most difficult,” she admits. “I’m very hands-on, and when I’m teaching I can look in your eyes and see where you’re at. And even TV was hard at first, because people aren’t smelling it, and I’m not sure what they’re seeing. I was panicked. It felt like I was standing in the dark, babbling to myself,” says Prescott. “Then I realized that people will get it if the crew gets in there and shows people what that consistency is, what the color is, and how it changes.”

SOME of Prescott’s show-and-tell is more political in nature. She is beginning to gain a reputation for her tirades against certain commercially available food products that she regards with almost moral indignation. Why do people use margarine, she asks, when they could use sweet, real butter? She relates with disgust a home-economics class she visited in which the students were making rolls from dough-in-a-tube. In place of sodium- and MSG-laced bouillon cubes, Prescott shows how to make glacé de viande, beef stock that has been cooked until it is reduced to a thick gelatinous paste, which may be cut off and used to flavor soups, stews, or sauces. “If you’re sick, put a cube of that into some water and drink it, not a bouillon cube,” she says.

Jell-O is a favorite target of hers. After demonstrating the dubious culinary qualities of Jell-O, Prescott then proceeds to Bavarian, a creamy gelatin-based custard that is the dignified alternative, and even ancestor, of Jell-O. “The Jell-O thing, I really got into that on one of my shows,” says Prescott. “You go to the hospital, you go through surgery, and they give you Jell-O. Let’s see, it’s made of chemical scent, chemical color, and chemical flavor. Now what part of your body is going to heal and get better from eating that?”

“I’d love to be sued someday,” Prescott continues with enthusiasm. “If I get sued, I will be able to put a company out of business, because nobody will ever eat [the product] again.” Prescott’s confidence may well be warranted: the attorney who represented Oprah Winfrey in her case against the beef industry was in one of her classes and handed her his card. “He said, ‘You’re going to need me someday. But just so you know, you’ll win.’ ”