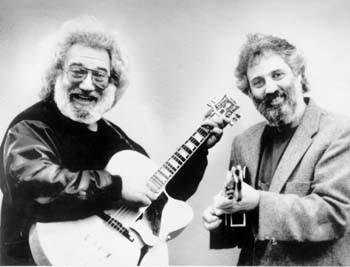 IT’S ONE of the most celebrated bootleg recordings in pop history. In 1993, mandolinist David Grisman invited his old pal Jerry Garcia–then enjoying some of his most commercially successful days as the Grateful Dead guitarist–to join him and bluegrass picker Tony Rice for a laid-back afternoon session at Grisman’s home studio in Mill Valley. The result was an intimate gathering that evoked a friendly front-porch feeling.

Some months later, Grisman heard that the jam session had found its way onto KBAI radio in New York, and deadheads were swapping the tapes at shows. The recording even popped up in a shipment of bootleg CDs that the Dead confiscated.

But then Grisman discovered that a pizza delivery boy had lifted a cassette version of the sessions from Garcia’s kitchen counter.

That episode is immortalized in The Pizza Tapes (Acoustic Disc), newly released on Grisman’s CD label. It’s a real gem, sometimes brilliant, sometimes not, but filled with warmth. The recording retains the banter–and false starts–that took place during the session. The trio tries its collective hand on Lefty Frizzell’s “Always Late” (a hit a few years earlier for country star Dwight Yoakam), jams on George Gershwin’s “Summertime,” and noodles its way through Bob Dylan’s “Knockin’ on Heaven’s Door.” There’s even a rare Garcia vocal rendering of a tentative “Amazing Grace,” sung at the request of Grisman’s wife.

The closing track, on which Garcia sings “The House of the Rising Sun,” is worth the price of admission alone.

For Garcia, the bluegrass sessions were a return to his country roots.

In 1992, I had a chance to sip tea with Garcia on a rainy morning at the Dead’s San Rafael office, located in a big Victorian a couple blocks from the downtown, and talk about his renewed interest in bluegrass.

“My grandmother was a big Grand Ole Opry fan,” Garcia recalled. “Yeah, I grew up in San Francisco listening to the Opry every Saturday night on the radio without knowing what I was hearing. In fact, my first 45 was a Hank Williams record, a song called ‘The Love Bug Itch.’ It was a really stupid song,” he added with a laugh, “but, hey, it was Hank Williams.”

At the time, Garcia–long regarded as one of rock’s most innovative electric guitarists–had begun nurturing his affinity for bluegrass breakdowns and hillbilly spirituals, playing occasional concerts with Grisman and some of the hottest country pickers this side of Kentucky. Grisman had just released Bluegrass Reunion (the first of six Acoustic Disc recordings featuring the duo), to which Garcia contributed two tracks. That CD was a traditional outing with bluegrass great Red Allen and featured banjo player Herb Pedersen, fiddler Jim Buchanan, and bassist James Kerwin.

In 1992, Grisman and Garcia had teamed up for a gorgeous self-titled CD featuring bluegrass-inflected renderings of B. B. King’s trademark “The Thrill Is Gone,” the Dead’s “Friend of the Devil,” and Irving Berlin’s “Russian Lullaby.”

“For me, that was a rich experience,” Garcia said of the recording while puffing a low-tar cigarette and showing satisfaction at being “one of the guys” during the no-frills sessions.

THE GRISMAN/GARCIA projects underscore a long-standing relationship between the two musicians. “He’s a real livewire and kind of a perfectionist,” Garcia said of the notoriously finicky Grisman. “We fire each other up in a way that I think is very interesting–and it’s interesting for the audience. But it’s one of those things that doesn’t bear too much analysis.

“After all, musical chemistry doesn’t yield to a rational yardstick.”

Ironically, the pair had first met by chance in 1964, when Garcia was on a pilgrimage to the East Coast in search of authentic bluegrass music. At the time, Grisman was leading a group of upstart bluegrass players called the New York City Ramblers, still fresh from their upset victory at the prestigious Union Grove fiddle competition in North Carolina.

“I had my banjo, he had his mandolin,” Garcia explained. “We cranked a little bit and he kind of tested me. I guess he wanted to see if these guys from the West Coast could play.”

Returning to San Francisco, Garcia fretted over the lack of good bluegrass players in the Bay Area and found himself regretting what he perceived as his own lack of virtuosity. “I wanted the bluegrass stuff to be perfect, and I wasn’t happy if it wasn’t,” he said.

Instead, he passed his time in Mother McCree’s Uptown Jug Champions, a local jug band that included guitarist Bob Weir–then a rebellious 15-year-old kid who’d been expelled from high school–and blues harmonica enthusiast Ron “Pig Pen” McKernan. In 1965, that band went electric, changed its name to the Warlocks, and added drummer Bill Kreutzmann and bassist Phil Lesh. By August of 1966, they had changed their name again, this time to the Grateful Dead, moved to the Haight-Ashbury district, and begun playing at Bill Graham’s psychedelic emporium the Fillmore Auditorium and other local venues.

Yet bluegrass continued to influence Garcia. With their acoustic instrumentation, three-part vocal harmonies, and narrative lyrics, Working Man’s Dead and American Beauty, both recorded in 1970, marked a momentary shift from the band’s signature freewheeling jazz-rock jams. “For me, it was one of those things where I didn’t want to spend the rest of my life in a studio making records that are too fucking weird for anybody to listen to,” Garcia said. “Besides, we recorded [Working Man’s Dead] around the same time as Live/Dead, which gave us a chance to scratch our itch for the weird shit.”

Coincidentally, American Beauty features Grisman playing mandolin on two tracks: “Ripple” and “Friend of the Devil.” The sessions were recorded on the day Grisman moved to the Bay Area, an auspicious event that compelled him to settle in Stinson Beach, near Garcia and fellow musician Peter Rowan. In 1973, Grisman and Rowan persuaded a moonlighting Garcia to pick up his five-string banjo for the first time in a decade for the short-lived Old & in the Way. That band–including fiddler Vassar Clements and bassist John Kahn–recorded one live album at the old Boarding House in San Francisco. The Grateful Dead’s Round label issued an album of those live sessions, also called Old & in the Way. In 1996, Grisman released the stellar Old & in the Way: That High, Lonesome Sound, also culled from the Boarding House dates.

Despite the long break between projects with Grisman, Garcia maintained that bluegrass remained “a vast reservoir” to which he returned time and again. “I think of this as an ongoing thing in my life,” he said. “And as long as it’s comfortable for both of us, I’d be happy to keep doing it part of every year.”

Fittingly, Garcia’s last known recording, made just two weeks before his death in 1995, was with Grisman in the small basement studio in which he had found so much peace and contentment.