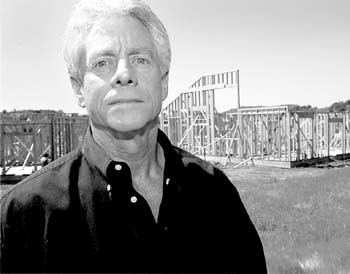 Hammering out a deal: Healdsburg activist Jim Winston has gathered enough signatures to place a growth-management ordinance on the November ballot. Now the City Council has authorized a dueling initiative.

Healdsburg struggles to preserve the integrity of its growth limit

By Jeremy A. Hay

FOR CLOSE to a year, the Healdsburg City Council has argued that too strictly limiting the city’s growth would drive up housing prices and make it harder to provide the parks and public services partially funded by developer fees. On Monday, the council voted unanimously to place on November’s ballot a growth-management ordinance that would be among the strictest in the county.

Its action comes barely a month after Jim Winston, a tenacious land-use activist whose tactics alienated even some of his allies, surprised the council by making doubly good on a threat to take the issue of managing Healdsburg’s growth to the voters.

“I think he has single-handedly gotten the council to say, ‘OK, we’re willing to do growth management,’ ” says Healdsburg Planning Director Richard Spitler.

Over eight days in March, Winston led a petition drive that collected nearly 900 signatures–almost twice as many as needed–qualifying his version of a growth-management ordinance, or GMO, for the November ballot.

Winston’s decision in February to pursue an initiative divided his allies. Among those who parted ways with him were several prominent Healdsburg slow-growth advocates, including Leah Gold, who chaired the 1996 campaign that established Healdsburg’s 20-year urban-growth boundary, one of five similar measures passed in the county that year.

“Initiatives are a heavy mallet to save for when you really need them,” says Gold.

She calls using the initiative to negotiate with the city “a kind of hardball politics that’s his style, not mine.”

Winston argues that the initiative forced the council to act. He downplays his differences with fellow activists, saying, “In the end, when they’re in the polling booth with the curtains closed, they’re going to vote for my initiative.”

The Winston Initiative would limit to 30 the number of new homes allowed in the city each year, with an exemption for affordable and low-income housing.

Issued a clear signal by voters in favor of slower growth, but convinced the Winston Initiative would put too tight a clamp on local development, the council had little choice but to push for its own GMO.

“There’s no doubt in my mind we have to get something on the ballot to defeat [Winston’s] ordinance,” says Councilwoman Cathy Harvey.

The council’s proposal has the same cap of 30 new homes, but includes seven categories of exemptions, including affordable housing, in-fill projects, granny and live/work units, and subdivisions of four lots or less.

So determined were councilmembers to defeat the Winston Initiative that on Monday Councilman Mark Gleason, initially the most resistant to the idea of a GMO, actually suggested setting the limit below the 30 proposed by Winston.

The competing initiatives are now similar enough that Winston, who has shown himself unafraid of offending the council, was moved to announce: “I’d be happy with the passage of either measure, as long as you include my recommendations in your initiative.”

The city’s proposal won the support of Gold and Bruce Abramson, another leader in the 1996 UGB campaign. In the days before Monday’s meeting, Gold, Abramson, and Councilman Jason Liles worked the telephones with both Winston and councilmembers, trying to fashion an alternative that would be acceptable to a majority of voters.

“As a local environmentalist, I’ll say this is a good approach,” Abramson says of the council version.

IN FACT, the city’s proposed GMO is almost identical to an earlier compromise plan brokered by Liles, a plan that both sides agreed to on April 17. Following that agreement, amid congratulations all around, Winston promised to withdraw his initiative, but found that doing so was next to impossible under state election law. The compromise died and with it the short-lived amity.

“This initiative no longer belongs to us; it belongs to the 900 people who signed the petition to get it onto the ballot,” Winston declares.

Over Liles’ objections, the council proposed that the compromise GMO “with one significant difference” be put on the ballot to compete with Winston’s. The difference: reducing from a fourth-fifths supermajority to a simple majority the number of council votes needed to change any aspect of the GMO.

Winston denounced the council’s proposal as a “sham.”

A week later, on Monday, the dead April 17 compromise was revived–complete with a fourth-fifths vote required to alter the ordinance–to face off with the Winston Initiative in November. “It’s a very interesting case,” says Dane Waters, president of the Washington, D.C.­based Initiative & Referendum Institute. “I don’t know of a single case where someone goes out, collects the signatures, spends the money, gets something on the ballot, then reaches a compromise.”

In the end, the two most significant remaining differences between the initiatives boil down to minor subdivisions and the issue of altering the adopted ordinance.

* The Winston Initiative could be altered only by a vote of the people; the council’s version by a four-fifths council vote.

* The council’s ordinance would make minor subdivisions of four lots or less exempt from the 30-home limit. Winston says this exemption might be a loophole, allowing developers to develop large projects in smaller increments.

Winston says the minor subdivision exemption “is still a major sticking point with us.” But the differences seem slight enough that even some of his staunchest supporters are reconsidering.

“I think we’re real close. . . . I don’t know whether that’s worth going to battle over,” Rex Wilson, who collected signatures for the Winston Initiative, said after the meeting.

THE INITIATIVE battle is just the latest twist in a tug-of-war commenced a year ago, when Winston appeared at a council meeting warning that if the city wasn’t careful it was going to outgrow the UGB well before its 2016 expiration date. He and a hastily formed citizens group led with a proposal that the city limit new housing units to 40 a year.

The group’s concern was fueled by the building boom at the city’s north end, where nowadays street after street of large single-family homes march over 230 hilly acres annexed by the city in 1995. Healdsburg experienced incremental growth through the early ’90s. But a surging economy ignited residential construction, mostly in the annexed area, where dozens of roads were carved and nearly 200 new homes built from 1997 to 1999.

Neither of the initiatives on November’s ballot will affect the close to 400 new homes already approved for eventual construction in the annexed area.

But GMO advocates say the goal is to slow the rate at which Healdsburg develops in the future and preserve the integrity of the UGB. Through much of the past year, GMO advocates and the city remained far apart on the number of new units to be permitted a year. The Planning Commission proposed 60, with a generous bundle of exemptions. Winston called the number “absurd,” saying that at that rate the city would use up the room within its boundary by 2008.

Under public pressure, the council lowered that number first to 50, then 45, but balked when Winston, citing revised figures from the city’s planning department, proposed a new limit of 30 units a year. The council dug in, and Winston decided to go after an initiative.

Now, Winston says, the decision is in the right hands. “Who better to decide than the people?” he says.

Says Gold: “It’s a win-win. We need strong growth management, and it looks like we’re going to get it one way or another.”