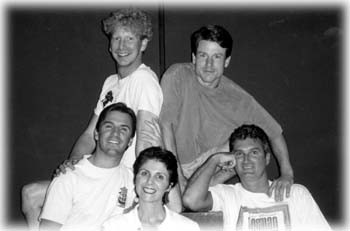 The scary hilarity of abstinence in ‘Jeffrey’

THE LIGHTS GO DOWN. Theatergoers’ knees are grazed by a late attendee groping toward a seat. The rustling sounds of cast and crew scurrying across the stage fall suddenly silent as the hue and cry of what sounds like lower primates performing an a cappella act ensue. The lights go up to reveal that the stentorian din was after all just a couple of guys doin’ it–a comic, if somewhat awkward start to Studio BE’s production of playwright Paul Rudnick’s Off-Broadway hit (and screen flop)–Jeffrey–directed by Studio BE veteran Robert Pickett.

A broken condom in the play’s first minutes (a daunting circumstance to partners of any sexual persuasion) is the impetus for the title character to stave off sex whilst living in the era of AIDS–a pledge that the affable Jeffrey is constantly tempted to abandon.

No sooner has Jeffrey committed to celibacy than he meets the man of his wet dreams pumping iron at the gym: hunkier-than-thou Steve (portrayed by the capable, swaggering, Matt Strong, a delight from Studio BE’s recent Crimes of the Heart).

Jeffrey’s resolve begins to cave from the onset of this “boy meets boy” story until a predictable curve ball (Steve is HIV-positive) is tossed into the fray and Jeffrey launches into a series of self-analytical asides. Throughout, Jeffrey’s intent to remain sexually abstinent is systematically chiseled away by physical needs, peer pressure, and finally love.

Director Robert Pickett (who also plays Jeffrey’s preening interior decorator friend Sterling) has extracted a functional if skeletal production from Rudnick’s text; Pickett does a serviceable job, given the company’s spatial, cast, and budgetary limitations. The set (conceptually spanning a dozen locations) is a whirling mélange of creatively rearranged furniture, recalling those comic improvisational party games where players find new uses for mundane objects. The somewhat listless costuming contradicts the antiquated stereotype that gay men are always the best dressed in the house, with the notable exception of Darius, a character whose chorus-line costumes from Cats are lavished on actor David Costner, who here makes a favorable debut.

Corisa Aaronson, the only female cast member (barring actor David Moll’s hilarious attempt to be female as Angelique, a pre-op transsexual male lesbian) appears in eight different roles, including top-drawer performances as a “postmodern evangelist” motivational speaker and as Angelique’s own zealously proud mother. Fortunately, Aaronson’s sequences come whenever the show begins to drag, her animated antics quickly re-enlivening it.

While the acting is commendable, director Pickett’s primary failing with Jeffrey is, in the overheard words of one audience member, “splitting the footlights”–that is, wearing the two harried hats of both actor and director in the same production. Pickett is a proficient actor and a competent director, but Rudnick’s sprawling and digressive play requires coddling and undivided attention. Pickett’s double duty results in a production bereft of distinct vision–a good show that could have benefited from a more monocular perception.