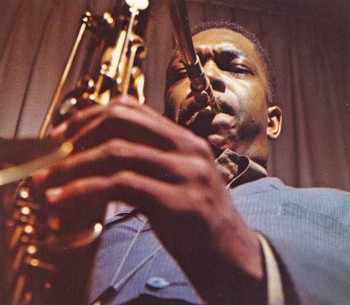 A Love Supreme: Work ‘discovered’ at the Library of Congress captures John Coltrane at a pivotal point in his career.

This month marks the 50th anniversary of the modern poetry reading. Oct. 7, 1955, a cool, foggy night in Baghdad by the Bay. Inside the Six Gallery in San Francisco, about 150 people gathered to hear Allen Ginsberg debut his groundbreaking poem “Howl,” a rapid-fire, sometimes profane assault on Eisenhower-era Cold War conformity. Bay Area poet Michael McClure is there. And so is the jittery spirit of post–WW II bebop.

Here’s how poet Michael McClure remembers that night, as recounted in his essay “Painting Beat by Numbers,” from the Rolling Stone Book of the Beats.” Somewhere during Allen’s reading of ‘Howl,’ Jack started yelling, ‘Go!’ like at a jazz club. Nobody had heard anything like this poem, though we knew exactly what it was about and because we were living it, had lived it or knew friends who had.”

Kerouac’s own writings, especially On the Road, were fueled by the edgy strains of bebop–lots and lots of bebop.

Cultivated in the early 1940s at Minton’s Playhouse in New York City by the likes of trumpeter Dizzy Gillespie, saxophonist Charlie Parker, pianist Thelonious Monk and drummer Kenny “Klook” Clarke, bebop edged its way into midtown clubs and eventually into the hearts of the Beat poets.

It’s fitting, then, that this month has seen a flurry of bebop reissues, at least a couple of dozen stacked on my desk, coinciding with the anniversary of “Howl.” And the corporate music machine didn’t even notice the opportunity to capitalize on this cultural landmark.

The crown jewel of these recordings is Thelonious Monk Quartet with John Coltrane at Carnegie Hall (Blue Note). Actually, it’s not a reissue at all; the tapes of the 1957 date were found recently languishing at the Library of Congress. It captures Coltrane at a pivotal point in his career, solidifying the sound that would carry him for nearly a decade, until his transformation into a free-jazz phenomenon. Within months of the Carnegie Hall date, he would make his debut as a bandleader on Coltrane, and record the stunning Blue Train, his only studio session for Blue Note.

On the cusp of making his break into his free-jazz break, Coltrane also can be heard on the newly released One Down, One Up: Live at the Half Note (Impulse).

Indeed, two other prominent new jazz reissue series trace Coltrane’s earlier development. As part of its recent acquisition of Fantasy Records, the Concord Music Group has compiled a dozen 24-bit digitally remastered anthologies, included several devoted to such bebop greats as Coltrane, Miles Davis, Sonny Rollins, Jackie McLean and Coleman Hawkins. Each CD comes with a bonus disc sampler of the other artists in the series.

Shout Factory! has released a treasure trove of bebop from the little-known Bethlehem label, a New York indie company that in the 1950s and ’60s recorded Coltrane, Duke Ellington, Charles Mingus, Dexter Gordon and others. John Coltrane: The Bethlehem Years captures the saxophonist in 1957 (just after recording the Blue Train sessions) as part of the Art Blakey Big Band, not a setting that most folks think of when considering Coltrane in this phase of his career.

But the real gem from Bethlehem is Mingus’ landmark 1957 recording A Modern Jazz Symposium of Music and Poetry. This CD finds Mingus delivering a remarkably strong set of bebop and on the brink of a creative surge that would result in Pithecanthropus Erectus, Tijuana Moods and the masterful Mingus Ah Um.

The Symposium title is somewhat misleading; most of the tracks are instrumental, though there is a narration of the Langston Hughes and Lonne Elder III collaboration “Scenes in the City.”

To underscore the influence bebop has had on modern artists, the Concord label has compiled Basquiat Salutes Jazz (Prestige), a set of tunes by jazz players whose music inspired 1980s abstract artist Jean-Michel Basquiat, who sometimes included the names of these players or even their song titles in his works.

Can a Kerouac Salutes Jazz compilation be far behind?