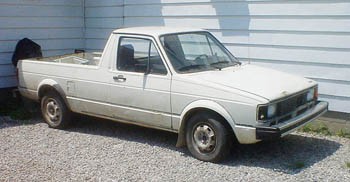 The do’s and don’ts of buying and selling

I sold my second car today, a 1981 VW Rabbit biodiesel truck. Expired tabs, it been sitting in our driveway for years. When the woman who bought it drove away, I felt like I had just won the lottery and the Nobel Peace Prize at the same time. Based on her gleeful, tire-burning getaway, I’m sure she felt the same way. It was a happy experience for both parties.

Oh, but the bad ones, those unfortunate car-selling and -buying experiences that stick with you like the smell of a dead rat in a wall. I’m talking about the situations where the seller misrepresents the car: “Well, it isn’t quite a mint 1954 Corvette, but you gotta admit the lines on this Pacer are sweet.” Or the buyer is terribly annoying: “I love it. Will you take $500 instead of $5,000.” Grrrr.

We want to avoid these miscommunications at all costs, and so, dearies, I’ve compiled a list of rules for sellers and rules for buyers. I’ve been on both ends of horse trading, and believe me, both ends stink.

Write a good ad. This means including a detailed description with year, make and model, condition, color and transmission type. The price should either be “firm” or “OBO.” Include a realistic photo, not some photo-shopped fantasy.

Whatever you do, don’t exaggerate. Don’t lie and say the car gets 50 miles per gallon when it really gets 15. Don’t say it’s clean when you smoke a pack a day in it. Don’t say it’s never been in an accident when there’s a dent on the bumper the size of Condi’s forehead. It’ll bite you in the butt eventually.

Answer the phone and be prepared to give buyers a few more nuggets of information about the vehicle. Though I was annoyed at all the questions I was asked that had already been answered in my ad, I made sure to go through them again without too much bitchy attitude. Also, you can’t put everything in an ad, so be prepared for some phone time.

Tell potentially interested parties where and when they can do a drive-by to check out the vehicle. I found this to be really useful—sometimes it’s just better for everyone to view the goods first without getting emotionally involved. I loved this.

I saw multiple people drop by and gaze at my lovely truck before leaving in disgust. I was so relieved I didn’t have to interact with them.

If you’re buying from a woman, don’t ask to talk to her husband or boyfriend. That’ll really piss us girl sellers off. We’re the ones selling here, so deal.

Don’t call and immediately offer half the asking price. You’ll get a click for that, missy. No, sellers don’t care what the Blue Book price is, the posted price is about what they want to get. Offering a drastic amount less is insulting.

Keep your appointment, and if you can’t make it, cancel 24 hours in advance. Nothing sucks more than waiting for a mystery buyer who never appears. I wasted two perfectly good weekends waiting for Godot. It’s depressing.

Don’t insult the car in order to get a lower price. One anal-retentive guy told me it wasn’t as clean as he’d like it. Well, get out the Shop-Vac buddy, but that price ain’t budging! He actually had a point (I’m not into cleaning), but it was the way he said it that put me on the defensive. If there’s a legitimate problem, respectfully point it out, ask the owner to fix the problem or lower the price to take into account the issue.

Respect the car when you test drive it. This isn’t the Grand Prix or Disneyland bumper cars. It’s fine to take it out on the highway, but don’t try to achieve Mach 4, and please don’t tailgate.

Finally, the deal with car-buying and -selling (and most other things in life) is, you get what you give. If you’re really sneaky or suspicious, the buyer or seller will pick up on that and will get sneaky and suspicious. If you approach the experience from a place of honesty, flexibility and respect, you’ll be rewarded with honesty, flexibility and respect. I also appreciate a sense of humor, but maybe that’s just me.

Send your offers to [email protected]