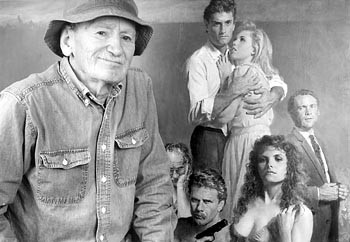 INCREASING MACULAR degeneration. James Avati speaks the phrase carefully, pronouncing the name of his recent diagnosis–“Increasing. Macular. Degeneration”–as if each word were a separate and undeniable fact, just as his deteriorating eyesight–the macula is the part of the eye that distinguishes fine detail at the center of our field of vision–is undeniably a fact. His tone of voice, however (one might call it cordial annoyance), reveals none of the gloom or self-pity one might expect from a renowned artist whose vision is in decline.

James Avati, known as “the King of the Paperbacks” for his pioneering cover illustrations in the ’40s and ’50s, and internationally lauded as one of America’s greatest artistic treasures, is too philosophical–and still too full of plans–to waste time feeling sorry for himself.

Just as he dismisses the enormous housing complex now being rooted into the hill above his cozy Petaluma house–“None of us can control the details of our lives,” he grins, waving an arm at the active construction site beyond his fence–Avati is matter-of-fact about his eyesight.

“I can’t see well anymore,” he shrugs, filing through a stack of vivid illustrations he’s brought out from his studio. “I’ve already lost my depth of vision. It’s hard for me to tell when my brush touches the painting.” But philosophy or no, he admits that the adjustment is a frustrating one. “I’m at the end of my tether, man,” he laughs. “Gee whiz! It is frustrating. I hate having to slow down.”

James Sante Avati, now 86, was 34 years old when he began illustrating paperback book covers. A graduate of Princeton, where he studied architecture, he had already dabbled in a number of occupations: laborer, department store window designer, and–having taught himself how to paint–magazine illustrator. After serving in Europe during World War II, Avati returned to his home in Red Bank, N.J., and found an agent. His illustration work for such magazines as Collier’s and The Ladies’ Home Journal helped him land a job with New American Library Publishers, where he was introduced to a brand-new literary product–the paperback book.

Borrowing a low-cost production concept from the mostly execrable “pulp” novels, paperbacks were intended to be make true literature easily available to the postwar masses. To sell the books, publishers counted on a snappy cover illustration to grab the eye of potential readers. Enter Avati, who immediately recognized that an illustrator’s job was to serve the author’s story. He stood out from the majority of other illustrators of the time by insisting on actually reading every book before designing its cover.

Avati’s approach–to capture the book’s overall theme, rather than a specific scene, by employing gritty, boldly realistic characters placed in a sharply detailed setting–immediately proved to have the desired effect: It sold books. He used non-professional models, often out-of-work citizens of Red Bank, photographing them in their all-too-natural anti-glory. He took pictures of dilapidated buildings, such as the crumbling sharecropper’s shack on which he based his famous illustration for Tobacco Road. Such messy detail helped create Avati’s reputation for rendering the dark side of Norman Rockwell’s innocent optimism. As fellow illustrator Stanley Metzoff put it, Avati showed “what the world was actually like after the bullshit was over.”

Whatever he did, it worked. By 1949, he was firmly established. Working for $200 dollars or so per illustration, Avati–firmly focused on his work–was unaware of his growing reputation. “I still thought of myself as a struggling artist,” he says. “Whatever reputation I was building grew up around me. I wasn’t even aware of it, thank God. I certainly wasn’t trying to influence anyone.”

Whether intentional or not, Avati’s innovations are widely accepted among collectors of early paperbacks as having influenced a generation of illustrators. By the early ’50s, his earthy, provocatively honest style was being emulated throughout the industry, giving weight to the connoisseurs’ assertion that Avati, essentially, invented the art of paperback illustration.

TODAY, such claims make him uncomfortable. After listening to an excerpt from one overseas critic–who asserts that Europeans in the postwar years received their notion of what an American was by absorbing Avati’s evocative images–the artist cringes.

“That’s a bit overwhelming, don’t you think?” he demands. “I don’t know whether I want that kind of responsibility. I certainly wasn’t trying to tell Europe how to look at America. I was just trying to represent the stories in the book. No doubt, my attitudes and visions of America were an ingredient of that, but … God! It would have been terrifying to have been told I was interpreting one nation for another.

After the heyday of the ’50s, Avati’s work–and the paperback industry in general–began to be edged out by other forms of entertainment. He continued illustrating, although, as he says, “the quality of the books wasn’t as good anymore.” In 1989, he relocated to Petaluma, where he lives with his son, an accomplished sculptor. He still occasionally accepts an illustrating job, but these days he usually works on personal projects: His paintings of his adopted home are often on view at Petaluma’s Gallery One art dealership. In recent years, his paperback work has gained him a certain amount of recaptured fame. In 1994 he was inducted into the Illustrator’s Hall of Fame, the only living artist ever to receive the honor. A documentary team from Amsterdam recently spent a week in his home, shooting a film on Avati’s life and work.

“To be honest,” he says, smiling wickedly, “all this attention is getting kind of old.” He gazes toward his studio, where an unfinished landscape awaits. It is in the painting of such personal works that Avati has found a deeper satisfaction, illustrating his own world for his own pleasure.

“A part of me was never interested in being an illustrator,” he now confesses. “That was the part that wanted to be a fine artist, a creative artist. And that part was always in control, to some degree–and I couldn’t always satisfy it. I still feel there’s a part of me that’s never been expressed.”

Which brings him back to the subject of his eyes.

“I may have to give some thought to changing my whole approach,” he allows. “But I’ve invested my whole life into developing this particular way of painting, I don’t know if I want to change it.

“Then again,” he says, chuckling (philosophically of course), “there’s a lot I still want to do. So I’ll most likely find some way to keep on doing it. The planets formed from the elements because it was implicit in those elements to be planets, and I paint because it is implicit in me to paint. So what the hell–as long as I can, I probably will.”