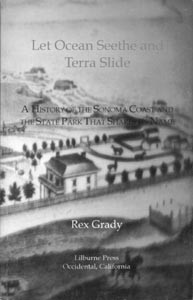 SOME MISTAKES are easy to make. For instance, you probably imagine being bored spitless by a volume chronicling the history of the Sonoma coastline–especially if the book tells its story in a breathless 267 pages without chapter breaks. But fear not: Let Ocean Seethe and Terra Slide has its faults, but boredom is never a danger.

To develop this detailed account of the interactions of humans and the nature along the dangerous edge of the mighty Pacific, Sonoma County author and state park lifeguard Rex Grady drew largely on park log books and newspaper accounts. But his own style is anything but dry: In colorful (sometimes purple) prose, Grady chronicles the history of the Sonoma Coast, beginning with the first settlers and moving up through the creation of the Sonoma Coast State Park, with a special focus on the last 40 years.

Grady has a strong point of view, especially when he recounts the activities of the hippies, juvenile delinquents, and biker gangs that have apparently marauded with unrelenting fury across the coast’s pristine beauty. Imagine a mix of goons from Reefer Madness and a Charles Bronson movie, and you pretty much have the picture. The author is not always fair, but he never fails to entertain.

The book ends when Sonoma Coast State Park finally gets state-mandated lifeguards in 1990, after 40 years and 100 ocean-related deaths. But, in his foreword to the book, park ranger Michael Martino still offers words of caution: Enjoy the beauty of the coast, he writes, “But for God’s sake be careful.” No kidding.

The Light Inside the Dark
By John Tarrant
Harper Collins; $25

SANTA ROSA author John Tarrant has many remarkable talents: He’s a trained psychotherapist, a student of Buddhism, a teacher of meditation, and a director of Zen training. As a writer, however, he has come up a bit short in this ambitious attempt to bring his knowledge to bear on the task of charting our inner spiritual landscape.

It’s no small thing to criticize a book that sports an approving quote on its dust jacket from Robert Haas, former poet laureate of the United States. Indeed, The Light Inside the Dark sometimes reads like a prose poem, albeit a book-length one. But an intolerable shapelessness and a relentless vagueness haunt the work, dragging it down despite some vivid imagery and compelling wordplay.

The author illustrates his thoughts on spirituality with anecdotes from both classical literature and the lives of nameless contemporary people. But in the latter case, it is very seldom clear just who these folks are: Are they friends, or clients in therapy, or fellow spiritual seekers? Most of the time, the reader has no idea, and so the stories assume a numbing wispiness. Couple that with the book’s lack of anything approaching a narrative arch, and you’ve got big trouble.

“For us, a good spiritual life is permeable and robust. It faces things squarely, knowing the smallest moments are all we have, and that even the smallest moment is full of happiness,” writes Tarrant in his conclusion. Surely the same can be said of a good book, but unfortunately, The Light Inside the Dark is anything but robust.