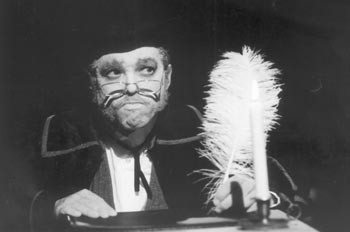 Thompson takes Dickens’ blueprints for Scrooge’s shantylike soul and builds a formidable edifice around the avaricious bean counter. Despite the one-dimensional nature of the original writing, Thompson draws Scrooge as a complex of defense mechanisms obscuring a humanity all but whittled away by anguish. His Scrooge is an eminently sympathetic character, albeit one spiced up with a delectable self-consciousness–he knows he’s nasty and clearly relishes it nearly as much as his redemption.

Thompson steers clear, however, of turning A Christmas Carol into a one-man Scrooge-fest. Plenty of room is left for the other players (many of whom are younger actors), who fill their roles with grace and aplomb.

Actor Tim Hayes’ ample talents seem channeled into his sonorous baritone as he plays in turns the ghosts of Christmas Past, Present, and Future. Hayes’ booming pipes recall Darth Vader’s resonant intonations, so much so that one half expects him to entreat Scrooge to “rule the universe together as father and son.”

Providing Scrooge’s back story is 13-year-old thespian Michael Spector, who offers a portrait of the capitalist as a young man. Spector, a striking and lucid performer, deftly shows the young Scrooge growing incrementally cooler and more distant throughout the production and is a fine and credible complement to Thompson’s characterization.

Bright young talents abound in this production (including the requisite plucky Tiny Tim played by Michael Cullen), which accounts, in part, for the show’s accessibility to children. On opening night, one rapt little boy chimed from the audience, “Is he nice now?” referring to Scrooge’s change of heart. The ability to inspire such engagement in young kids is one of the show’s finer attributes. Well done.

DIRECTED BY Wendy McGothlin Wisely, playwright Daniel Sullivan’s Inspecting Carol depicts the backstage shenanigans of a community theater company’s annual production of A Christmas Carol. Theater about theater is an oft-played but still workable premise (Noises Off, Travesties) that might have worked here were it not for this play’s pesky insistence that it is a comedy despite the production’s copious evidence to the contrary.

Likable Paul Silverman plays Wayne (an aspiring but indubitably terrible actor) seeking placement at an ailing repertory company whose National Endowment for the Arts funding has been frozen pending proof of artistic merit (PASCO is playing with fire). The theater’s business manager (Michael Ray Wisely) and director (an on-the-mark Jessica Powell) mistake the neophyte actor for an undercover NEA agent whose stage ambitions must be heeded lest it mean curtains for the theater.

Idiocy almost prevails over predictability as Wayne stands in for the show-within-the-show’s Tiny Tim (replacing sharp sixth-grader Barry Brownstein’s phlegmatic, candy-mad Luther), and everything that can go wrong … well, you know.

Director Wisely’s real mistake was saying “Why not?” to Sullivan’s enfeebled material when she should have left it at “Why?” By far the most upsetting thing about Inspecting Carol is watching good actors (Robert Parnell’s Scrooge is brilliant) plod through the clotted plot en route to a snap-on catharsis instead of marching it back to the workshop.