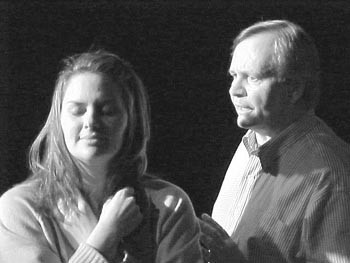 ‘How I Learned to Drive’

How I Learned to Drive.

Incest wreaks emotional ruin in ‘How I Learned to Drive’

FOR SOME, the subject of Actors’ Theatre’s production of Susan Vogel’s play How I Learned to Drive may herald a red light. A seriocomic examination of child molestation cozied into a driver’s ed subplot, Vogel’s Pulitzer Prize-winning work offers a disquieting look at the emotional ruin wrought by the unhealthy relationship between an uncle and his niece.

Li’l Bit (Coco Tanner-Boylan) and Uncle Peck (Tim Hayes), nicknamed for their respective genitalia, hail from a white-trash family that boasts more crackers than a Nabisco factory. As Li’l Bit avers early on, “Family is an acquired taste–like French kissing,” and indeed, despite the tawdry aspects of her kin (a collection of mentally compromised freaks), one cannot help but warm up to them through the course of the show.

Though somewhat handicapped by a potholed “road of life” metaphor, Vogel manages several interesting left turns in a narrative that switches from past events to present ruminations. Her script, however, is more than the average survivor’s tale. It is literature of a caliber seldom seen in contemporary theater.

Tanner-Boylan’s portrayal of Li’l Bit is both profound and devastating. One of the more remarkable actresses on the local stage, Tanner-Boylan displays an astounding emotional elasticity. Her character’s laughter gives way to waterfalls of tears in the turn of a phrase, and her jollity melts into melancholy when she delivers such cryptic lines as “That was the last day I lived in my body.”

Hayes’ Uncle Peck is a chilling melange of motor enthusiast and pedophile, deceptively drawn by the actor as a sympathetic character. This challenging interpretation makes Peck simultaneously contemptible and pitiable, and by any measure marks a triumph for Hayes. When Uncle Peck quietly intones, “Nothing is going to happen to you until you want it to. Do you want something to happen?” audiences will surely shudder.

Groves also shines during a cameo as Li’l Bit’s mother, who effectively locks the door on future emotional communication by chiding the then 11-year-old character for whatever grief may befall her if she takes a day trip with Uncle Peck.

Though some may find this production troubling or even overwhelming, at the very least it will start one re-evaluating two classic American obsessions: cars and teenage girls. In the capable hands of Actors’ Theatre, How I Learned to Drive garners a well-deserved green light.