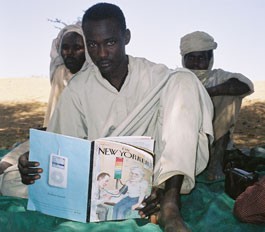 In February 2005, two Human Rights Watch researchers traveled to the troubled region of Darfur, Sudan, to gather information about the ongoing genocide. To keep the children occupied while interviewing their parents, the researchers gave the kids paper and crayons. But instead of flowers and smiley faces, the children drew violent scenes of their villages under the attack of Janjaweed gunfire and government air strikes–scenes to which they had become accustomed.

To give children like them and other persecuted Darfurians a voice, filmmakers Aisha Bain, Jen Marlowe and Adam Shapiro (About Baghdad) have recently finished Darfur Diaries: Message from Home, an independent documentary about the genocide in Darfur. They allege that the Sudanese government is sponsoring the killing under a smokescreen of ethnic tensions between Africans and Arabs. Since the violence plateaued in February 2003, the conflict has caused between 200,000 and 400,000 deaths and has displaced 2 million people from their homes.

Before June 2004, when the United States declared the Darfur situation a genocide, there was practically no media coverage of the atrocities.

Jen Marlowe, speaking by phone from Olympia, Wash., where she is working on a companion book to the documentary, describes why they decided to make the film. “Ten years after the genocide in Rwanda, dignitaries were making speeches about what they’d do differently if they were confronted with a similar situation again. Meanwhile, there were people being killed in Darfur, and nobody was talking about it or acting on it,” she says.

Now more people are talking about it. Darfur Diaries has screened for the Congressional Human Rights Caucus and the United Nations Security Council. Difficulties with such a project of course abound. The filmmakers had a hard time enticing potential donors to give money to fund a project about a problem they’d never heard of before. There was a language barrier and the difficulty of sand-clogged equipment. Electricity is an unreliable commodity in the Sudan. But one of the toughest problems was the emotional one.

“What we’re trying to do, which is galvanize the world to care, is something that would ultimately be more useful than a humanitarian band-aid,” Marlowe says. “However, when you’re confronted by such overwhelming need in the moment, you struggle with the feeling of inadequacy that you’re there with just your cameras.”

But the cameras came in handy, even for addressing immediate problems. There’s one moment in the film where we meet Ibrahim, a former farmer who now fights with the Sudan Liberation Army in Darfur, and who hasn’t seen his wife, mother or children, all living in a refugee camp in nearby Chad, for 11 months. The filmmakers record a message from him to his family, whom they amazingly locate among the 24,000 people living in a Kariare refugee camp. From the midst of the chaotic, dusty camp, the family watches Ibrahim on the tiny camera screen, and as his mother reaches out to touch his image, you can feel the sense of relief they feel, finding out that he’s OK.

This humanity is just one of the things that differentiates this film from so much other media coverage about the genocide. “One of our goals was to show three-dimensional people,” Marlowe says. “Mainstream media dehumanizes these people by showing “Victims” with a capital V or “Refugees” with a capital R, but we wanted to show human beings who cast a shadow . . . not as just suffering masses in Africa.”