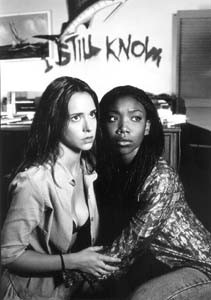 I Still Know What You Did Last Summer, part of the gore-filled season of fall film.

IN THE SMOKING ruins of local theaters, blasted by Nazi ammo, asteroids, and Godzilla, peace reigns at last. The summer blockbuster season is over. What an appropriate word for all that demolition: “Blockbuster” comes from a slang term used during World War II for a huge bomb.

After Thanksgiving, that cold snap in the air means that the sap is running; sentimental contenders for the Oscar will ooze up from Southern California like ground fog. But this fall, horror films mob the cineplex. One good bet for the smartest and the scariest of the lot: Apt Pupil (Oct. 23). Directed by Bryan Singer (The Usual Suspects), the film is based on the memorable Stephen King novella collected in Different Seasons. The eerie Sir Ian McKellan (Richard III) stars as a disguised Nazi war criminal who passes on his special knowledge to an eager young suburban brat.

Bride of Chucky (Oct. 16) stars Jennifer Tilly as the love interest of the infernal talking doll from 1988’s Child’s Play. John Carpenter’s Vampires (Oct. 30) is based on John Streakley’s novel, outlining the war between the Vatican and the Vampires. James Woods stars as John Crow, a member of what could be described as the Green Berets of the Swiss Guards. Urban Legend (Sept. 25) is a tale of a mad psych professor, thought to be nothing but a rumor, who comes back to clean out the clocks of a bunch of arrogant students.

Practical Magic (Oct. 9) stars Sandra Bullock and Nicole Kidman as white witches who look for love in all of the wrong places. Dianne Wiest and Stockard Channing co-star as the women’s aunts, who taught them everything they know about magic. The film is based on Alice Hoffman’s novel.

Bringing up the rear: I Still Know What You Did Last Summer (Nov. 20), starring a hook-wielding weirdo chasing Freddie Prinze Jr., Jennifer Love Hewitt, and eyebrowless TV cutie-pie Brandy. If all of the above doesn’t curdle your blood, there’s Gus Van Zant’s remake of Psycho (Dec. 4). Is it shot for shot, as is rumored?

Even two of the romantic films on offer this fall are tinged with the occult. What Dreams May Come (Oct. 2) stars Robin Williams and is directed by Vincent Ward–that exotic New Zealand director who gave us The Navigator. Dreams is an Orpheus story: Williams plays a man killed in an auto wreck; Annabella Sciorra is his wife, who commits suicide and thus goes to hell, where Williams has to track her down. Meet Joe Black (Nov. 13), a remake of the 1934 Frederic March film Death Takes a Holiday, stars Brad Pitt as the Reaper. (How can death be any worse than a Brad Pitt movie?)

While the fall season may look like nothing but scream fests, there are some films for adults. One romance asks the musical question, Why Do Fools Fall in Love? (“Because they’re fools, that’s why”–Matt Groening.) Halle Barry, Vivica Fox, and Lela Rochon contend for ’50s teen idol Frankie Lymon. Strike, which follows a women’s college rebellion against the plan to go coed, is the feature film debut of noted documentary maker Sarah Kernochan (who directed the early evangelist exposé Marjoe).

William Styron adapted his moving short story Shadrach into a film starring Harvey Keitel and Andie Macdowell; it’s a tale of a 100-year-old ex-slave returning to the plantation where he was born. The film version of Toni Morrison’s Beloved (Oct. 16) is produced by Oprah Winfrey, who also stars in the movie alongside Danny Glover. The movie version of Anna Quindlen’s bestseller One True Thing (Sept. 19) stars Meryl Streep, William Hurt, and Renee Zellweger. Devil with a Blue Dress helmer Carl Franklin directs.

Due this fall, from Miramax: the film 54. At last, many years too late, you’ll be able to get inside. Austin Powers‘ Mick Meyer plays Steve Rubell, septum-impaired overlord of Studio 54, the infamous ’70s New York disco. Salma Hayek, the serpent dancer in From Dusk Till Dawn co-stars. In need of more dance-floor sleaze? Theater-switch afterwards for A Night at the Roxbury, a Lorne Michaels-originated picture based on a Saturday Night Live sketch about two lecherous disco-doofuses.

And for children: DreamWorks releases Antz (Oct. 2), the computer-animated adventure about Z-4195, an ordinary worker ant (Woody Allen does the voice) who falls for the Ant Queen’s daughter (Sharon Stone). The Rugrats Movie (Nov. 27) is based on the animated TV show. The live-action Jack Frost (Nov. 6) stars Michael Keaton as a dead dad who comes back as a snowman to nurture his children. Yeccccchhhh! I’m sure the producers would like you to forget that there already was a direct-to-video splatter movie titled Jack Frost, all about a Bad Frosty, a psycho snowman with a big butcher knife. Properly re-released and marketed, this gore fest could have been made a crossover from a horror-movie heavy fall to post-Thanksgiving family movies season.

SPEAKING of re-releases: Fall will bring Jacques Demy’s The Young Girls of Rochefort, his 1968 follow-up to the exquisite 1964 The Umbrellas of Cherbourg . Rochefort stars Gene Kelly and those fetching Dorléac sisters, Françoise and Catherine (Deneuve). As in Cherbourg, the music is by Michel Legrand. Lastly but not leastly, Orson Welles’ 1958 Touch of Evil returns, recut by noted editor and director Walter Murch according to Welles’ notes. This is a fresh opportunity to see the greatest of all film noirs, and it’s being re-released right when Welles’ stock is high, thanks to the American Film Institute list naming Citizen Kane the No. 1 film of all time. Touch of Evil destroys the argument that Welles was finished after Citizen Kane. Many of Welles’ old associates turn up for cameos, especially Marlene Dietrich as a Gypsy bordello keeper who is also the angel of death.