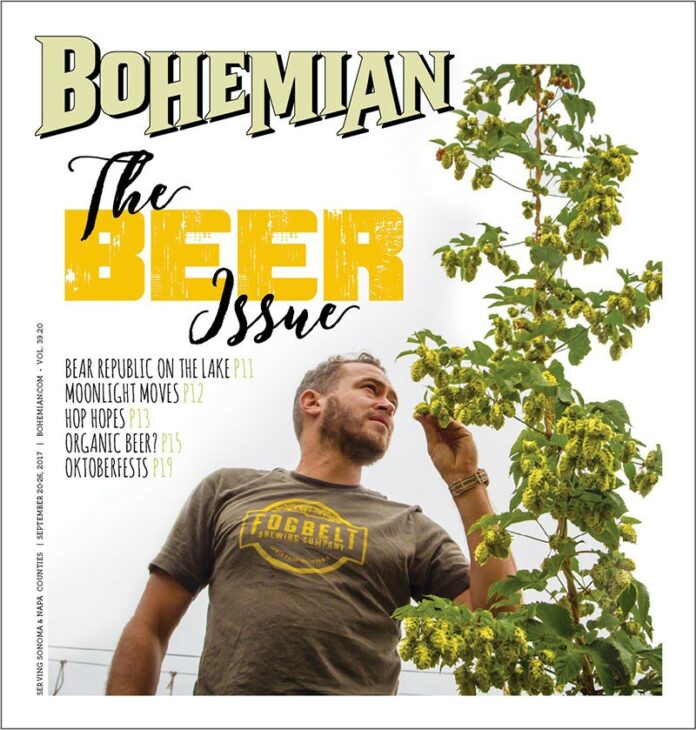 Local hops lacking, but not for lack of trying

Six feet tall and totally useless, there she stands—or has managed to climb, before giving up.

It isn’t that she’s wilted in this summer’s relentless heat; though red and brown may fringe her leaves now in September, they’re still as prickly and deep green as in midsummer—and I should mention here that I only say “she” because the most desirable hops, the fragrant, light-green, cone-like flower buds that are used in brewing, are produced by the female Humulus lupulus plant. No letters, please. I suppose it could be a dude. It sure is a dud.

When I planted three hop rhizomes in 2015, the other two of which checked out completely this spring, I was hoping for an easy home-grown addition to my homebrew, just like the hop I planted some years ago that kept producing bumper crops of spicy green cones with no input at all, even as my interest in home-brewing waned.

I returned to the hobby with better knowledge of the hops used in the English beer styles I wanted to brew—hops like this Golding, which should have grown to 15 feet or more by late July, but didn’t offer me a single cone.

Brewmaster Jesus Ceja had high hopes for Saaz, a Central European variety that contributes a spicy character to classic pilsners, when he established a 20-foot-tall hop trellis at Carneros Brewing Company. Having 15 years experience brewing pilsner styles around the world for Anheuser-Busch, Ceja knew where to get a quality hop: a ranch on the U.S.-Canadian border.

The first year, the hops grew well. The next few, not so well. Finally, they had to rethink the project. It wasn’t the growers—it was the hops, and the climate wasn’t to their liking. Now Carneros Brewing is replanting with varieties better suited to California.

Good news: maybe I don’t have to blame myself for that dismal Golding?

“I’ve torn out as many as I’ve planted,” says Paul Hawley, co-founder of Fogbelt Brewing Company in Santa Rosa. Hawley planted a quarter acre of hops on his family’s property in Healdsburg, which is mostly in vineyards. Like wine grapes, hops thrive in the temperate climate of Northern California. But results may vary because of their sensitivity to chill hours and day length—and with some varieties, those results are nil.

Hawley has had no luck with Centennial, for instance, a variety he describes as “very tricky.” In major hop-growing regions like eastern Oregon and Washington state, notes Mike Stevenson, president of the NorCal Hop Growers Alliance, hops get more daylight hours during summer solstice, exactly when they need it to set a big crop.

But while they get twice the yield in Washington state, the payoff for North Bay growers is in uniquely flavorful hops.

“It’s still thought of as a commodity,” Hawley says of the role of the hop in brewing. “But really it is not—it’s more like grapes. It’s going to change depending on where and how you grow it.”

The popular Cascade hop, for instance, tends to show citrus and pine aromas when grown in Washington, notes Stevenson. In Sonoma, adds Hawley, “the Cascade is more floral.” Even then, the Cascade grown at his hop yard has a distinctly melon note compared to others, according to Hawley.

Samples of Fogbelt’s saison, pale ale and IPA brewed in advance of their wet hop festival in early September did, indeed, show more tropical fruit notes than typically bitter or “hoppy” aromas. “It’s not about hitting you in the face with hops,” says Hawley. “It’s more about experiencing the aroma and flavors.”

The Alliance formed in 2016 to help share hop-growing knowledge over a few beers. Dues-paying members include more than a dozen farmers with more than 50 plants, hobbyists and owners of related businesses. A collaboration with the organic chemistry program at Sonoma State University is helping them to dial it in further by analyzing samples of alpha acids in hops grown in different soils.

A sandy, well-draining soil is best for growing hops, say Hawley and Stevenson, and while the outlook isn’t always entirely hopeless for finicky varieties, they name three foolproof choices for the home grower: Cascade, Chinook and Columbus.

Another good bet, California Cluster, was found growing wild along the Russian River. Having been left to its own devices after the hop industry abandoned the region in the 1950s, this wild sister is particularly well adapted to the climate. But it’s hard to locate.

And don’t forget to allow plenty of room for the hop to grow up to 15 feet—if you’ve got high hopes.

Why the dearth of organic beer?

The refrigerated beer aisle at this Whole Foods Market is so generous, it spills over into a refrigerated endcap around the corner, and is even bookended with a taproom. This, where America shops for healthful, wholesome, and organic foods, is surely where the most comprehensive selection of certified organic craft beer can be found, so let’s start shopping.

After some searching, here it is: Eel River IPA from Fortuna, Calif., bears a green and white USDA organic seal on the carton. And—that’s it. There are dozens, maybe hundreds of beers here: fun, fruity beers; serious, traditional beers; bourbon-barrel beers and light session beers. Corona and Coors Light are here. Where are the organic beers? Surely, the health-conscious and environmentally aware customers of this natural grocery store chain, particularly in this Northern California market, must be asking the same question every day.

“Not so much,” says a beer department manager, while pointing out that there are, indeed, a few more organic beers in the endcap—Samuel Smith fruit ales and a porter, which are from England. She says that people tend to shop by brand or style here, and they aren’t as concerned about organic beer as they are about gluten-free beer, which is prominently displayed with six brands.

Fine, so shoppers feel good just stepping in the door of a name-brand organic food chain but take a pass when it comes to purchasing organic—who knew? The selection is only marginally better at locally owned natural foods markets, however. And customers are not asking for more.

“Not as often as I would like,” laments Mandy Reilly, grocery buyer at Community Market in Sebastopol. “But the organic options we have are some of our top-selling varieties, so that speaks to the customer base we have at our store,” Reilly adds. Community Market carries organic beer from Eel River and Butte Creek, although distribution for the latter is spotty (taglined “The Official Beer of Planet Earth,” it doesn’t make it out of Ukiah when owner Mendocino Brewing Co. puts its core lineup first).

One of the reasons for the limited selection is somewhat circular, Reilly speculates: unlike other grocery categories, which may display conventional and organic options side by side, the beer aisle doesn’t suggest the choice in the first place. “They really don’t think about it,” says Reilly, “because they don’t see an option.”

Consumers are more worried about GMO in their foods, according to Reilly. Thus far, the market for barley hasn’t been lucrative enough for the crop-science industry to come up with approved GMO barley.

Even so, “it’s definitely something people should be aware of,” says Reilly, “if you’re concerned about where your food comes from. Alcohol is digested by your body more readily than anything else, so you’re getting maximum potency there.”

Organic wine has also gained little traction in the market, but unlike wine, which benefits from a level of sulfite above 10 parts per million (prohibited in organically certified wine), craft beer does not typically have any added preservatives other than hops.

The struggle for market traction is clearly a frustration for Daniel Del Grande, owner and brewmaster of Bison Brewing in Berkeley.

“Consumers in Sonoma, Napa and Marin have been pretty price-sensitive,” says Del Grande, who founded the organic brewery in 1997. “Once I get my beer on the shelf, they don’t seem to be willing to pay for organic beer, so frankly it’s been rotated out because consumers don’t buy it.”

Del Grande sells his lineup (which includes a double Simcoe IPA called Kermit the Hop, a chocolate stout, and a red ale with rye and caraway) in at least eight states, and in Whole Foods in some markets, but other stores looked at the metrics recently—pre-Amazon sale—and decided to bump Bison. Not because they’re unsympathetic, but because they aren’t meeting the metrics.

What are the metrics? “You need to sell three or four cases a week to stay on the shelf,” says Del Grande. He’d sell that much if, for example, 32 people in Petaluma bought one six-pack every other week. “So the bar is pretty low.” Priced a dollar or two higher than other craft brew at $10.99 to $12.99 per six-pack, Bison beers do sell better on discount but, Del Grande adds, “I can’t keep my beer on discount and run a nonprofit.”

Besides the health aspects that drive so many consumer choices—who ever thinks about the pesticides used to control mites and mildew on hops?—Del Grande points to the environmental and ag-system benefits when a household buys 52 six packs of organic beer per year, creating demand for a farmer to convert 1,800 square feet to organic farming.

The beer itself doesn’t suffer for lack of choices. Del Grande says that today he’s got plenty of certified organic malts, specialty malts and hops to choose from—like the beer, they just cost more. Should environmentally concerned beer drinkers make the money-to-mouth connection any time soon, says Del Grande, “I can triple my output tomorrow.”