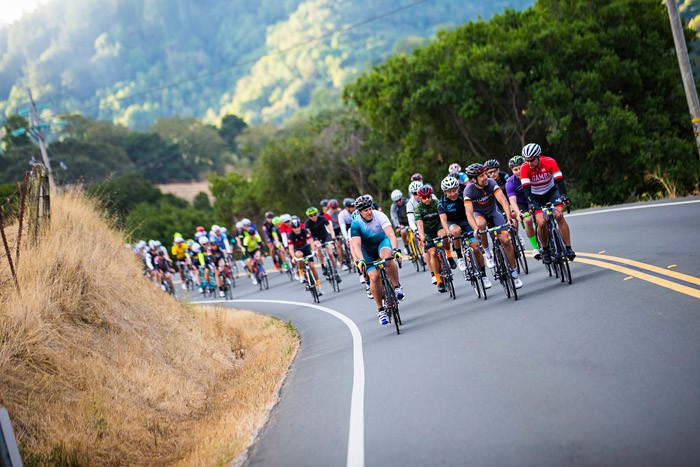 The Jensie has been named among the Top 15 U.S. Gran Fondos by Grand Fondo Guide.

I survived 70 miles of the inaugural ride in 2015, and am trying to decide whether to stick with that pretty fair slog, or step up to the challenging 100-mile category in 2017, thanks to a press ticket provided the Bohemian by the Fondo. There are a few changes to the routes this year—but first, let’s back up and answer the “what, exactly, is a Fondo, again?” question.

A Fondo is an organized, recreational bicycle ride that’s open to all cyclists and is not a race, but is timed, and which is supported by some road closures and rest stops. If you’ve biked West Marin, you know the views are superb and the smooth road surfaces, in many areas, are a fine sight, too. Just imagine all that, plus traffic control, rest stops at just the right intervals, plus energy snacks, water and…beer? For me, it’s a little too early in the morning for that.

Plus, there’s gregarious Jensie himself, who manages meet and snap photos with half the peloton and make it to the finish line. Everyone has a German-inspired meal and beer or other beverages afterward.

As with most Fondos, the Jensie has a fundraising component. Ticket sales benefit MCBC and their efforts to make cycling in Marin even better, and safer, for everyone. Three programs currently top their list of priorities: Safe Routes to School helps to educate school communities in cycling skills and advocates for infrastructure improvements that encourage people to choose “green” transportation option; the Road Advocacy Program promotes bike routes in Marin through partnerships with public agencies; and the Off-Road Program helps to expand and restore mountain biking trails—with the goal of a future off-road trail from the Golden Gate to Point Reyes.

All Jensie routes start out together from Novato’s Stafford Lake Park in a throng of cyclists. It’s both exhilarating and a good opportunity to brush up on your peloton etiquette—no crossing wheels!

I can recommend the 40-mile “Break Away” route to anyone who can stay upright on a bike for half a day and climb a moderate grade or two, but if you’ve got the stamina and want a bigger challenge, step up to the 70-mile “Presidential.” However, only the 100-mile “Shut Up Legs” route—so titled for Jensie’s catch phrase during his pro riding days—includes the grinding Alpine Dam climb this year.

Maybe this year I’ll get wise, and makes one of those promo water bottles from the previous service stop useful with beer, for the end of that climb.

The Jensie Gran Fondo of Marin leaves Stafford Lake Park very early in the morning of October 7, 2017. $95–$195 For tickets and details, click here.

Next ArticleHope for Hops