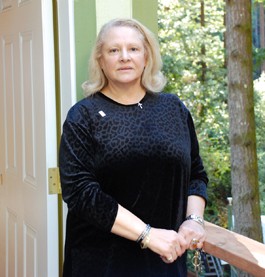 Three years ago, Nadia McCaffrey got the news that every military mom dreads: her son Patrick McCaffrey had been killed in Iraq. Her story was in part told in these pages (“The Exploitation of Pat Tillman,” June 27, 2007), adding a layer to the tale of the government’s shameful response to the death of the former NFL star and Iraqi soldier Pat Tillman from friendly fire. Soon after her son’s death, McCaffrey pledged to turn her grief and rage into a constructive project, one that is now taking shape in Guerneville: a three-story home called Veterans Village that will house up to 20 returning veterans and provide them with shelter, counseling and job-placement services as they readjust to the vastly different civilian world.

Wearing a cross pendant and a gold star pin on her indigo bIsaacse (the gold star signifies she’s lost a child in combat), McCaffrey met me in early November at the rustic facility sheltered by a redwood grove. She has a no-nonsense attitude and exudes determination and confidence, so it’s not a surprise that her pledge to have a facility up and running by the end of this year is coming to fruition.

When she made her promise, McCaffrey had no idea how or where she’d provide a residential facility for veterans or how she would finance it. But through Veterans Village workshops and events for veterans and their families, McCaffrey met a donor who agreed to help her. He asked to remain anonymous for this story. We’ll call him Isaac.

Isaac put McCaffrey in touch with the Guerneville home’s owners, who were building it as a residence, and encouraged them to let it become a facility for veterans. Isaac says he’s paying for construction improvements, appliances and furniture to get the home ready for its first residents to move in December. A veteran of the Soviet and Israeli armies, Isaac felt compelled to give something back to the men and women who have served in the U.S. military.

“I feel it’s very unjust for a person to come back after everything they’ve done for the country, and someone gives them a short briefing, drops them at the airport and says, ‘Have a nice day,'” he says.

“Only the community can correct this.” Located on a small cul-de-sac just off Drake Road, the four-bedroom house has a kitchen, common area where vets can share stories and a separate wing for female soldiers. Most rooms have views of the towering redwoods that surround the property.

McCaffrey, a resident of Tracy, will live at the facility and be what Isaac terms the “goddess mother.” A staff of three or four will be led by an on-site manager, who is a Vietnam vet. McCaffrey’s group, Veterans’ Village, is working with Farms Not Arms to give scholarships to vets who want to make farming their postwar vocation.

Veterans can stay at the house for several weeks or several months, depending on how much time they need. “It takes time for a person to reconstruct themselves and fit into civilian life,” Isaac explains. “It doesn’t happen in one day.”

Marcy Orosco, director of workforce and housing services for North Bay Veterans Resource Center, will help with job placement, résumé development and counseling for those living at the Guerneville housing facility, and she has positive news. “We have partner employers who want to hire vets first,” she says.

McCaffrey, who’s met with senior government and military officials in Washington to advocate for veterans, hopes the Guerneville house is the first of many such facilities. “This is just a pilot, a model,” she says, adding, “We’re opening another one in upstate New York.

“Noting that about 60 percent of returning vets have spouses and/or children, McCaffrey says, “We need to empower [veterans] again so they can readjust to society without destroying their families. Our goal is to give them the resources they need so they don’t end up on the street or on drugs.”

One of those tools will be voluntary meditation practice. Stephen Edwards Jr., a veteran whom McCaffrey has worked with through Veterans Village, has found solace through meditation. “Within six weeks of returning from a 12-month tour of duty in Iraq, I was diagnosed with acute post-traumatic stress syndrome,” he wrote in a post on VeteransVillage.org. “I was experiencing depression and anxiety and felt very angry. Unfortunately, I took this out on my wife and daughter, who did all they could to be helpful and understanding. But they weren’t able to heal me. I found myself trying to hold the enormity of my pain and anger inside.”

Edwards attended a retreat lead by a Vietnam veteran and Buddhist monk, and says that through meditation, he “began to learn how to accept my feelings and not to suppress or discard them, and to learn how to control my anger, anxiety and irritability.”

Dedicated to Ken Ballard, who lived in Mountain View before being killed while serving in Iraq, Veterans Village is now accepting applications for staff and for vets who need assistance.