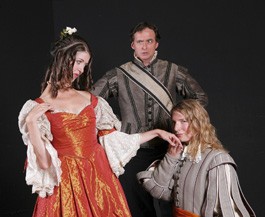 “ ‘I nnocent’ is a most approximate term.” This proclamation is made late in the second act of playwright John Strand’s satisfyingly funny, word-warring adventure Lovers and Executioners . In Strand’s view of the world, nothing is ever all black or all white, all sweet or all sour. Neither is Lovers and Executioners , a rich, thoroughly enjoyable English adaptation of La Femme Juge et Partie , a largely forgotten 17th-century play written by Molière’s most vigorous theatrical rival, Antoine Jacob de Montfleury. As staged by the Marin Theatre Company, under the sure-handed direction of Josh Costello, the wonderful period details—the witty dialogue all in verse, the magical set by Steve Coleman, the magnificent costumes by Fumiko Bieldfeldt—manage to anchor the story in France of the 1600s while maintaining a solidly contemporary sense of humor and social awareness.

Bernard (Jackson Davis) is a rich landowner in the market for a new wife after the accidental drowning of his first wife, Julie. His terrible secret, known only to his faithful but cranky servant Guzman (Gary Grossman), is that Julie’s death was not accidental; Bernard, believing her to have been unfaithful, abandoned her to die on a tiny strip of an island in the middle of the sea. What Bernard does not realize as he sets his sights on the ditsy but attractive Constance (Alexandra Creighton), is that Julie (the excellent Lisa Anne Porter, above right) is not dead; she escaped from the island, spent the last three years training herself in swordsmanship and has now returned to town in the guise of a young soldier named Frederick.

As Frederick, Julie exacts her revenge on Bernard, first by wooing Constance herself (uh, himself), and then by snatching away the job Bernard had been aiming for, that of the local magistrate. As magistrate, Julie/Fredrick ends up charging Bernard with the murder of his wife, a hanging offense, unless he can prove that she was indeed unfaithful, a shameful charge he’d almost rather die than have to live with.

The play is crammed with sword fights, wacky wordplay and pithy, thoughtful ruminations on the meaning of justice and forgiveness, while remaining miraculously light and full of mischief. The ending is powerfully ambiguous, staunchly avoiding ridiculous wrap-ups. As such, it is far more satisfying—and funnier, too. From start to finish, while ever threatening to become a tragedy, Lovers and Executioners never stops being hilarious.