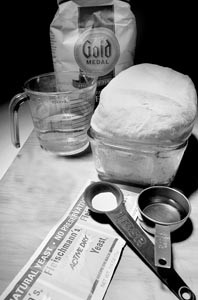 HOMEMADE BREAD, in this country at least, is spoken of in almost spiritual tones. Oh, the feel, the smell, the whole rapturous process. But sit for a few hours under the tutelage of champion baker Craig Ponsford and you’ll be trading your touchy-feely tune for a calculator and a good electronic scale.

Not that the baker-in-chief at Artisan Bakery in Sonoma isn’t entirely devoted to bread. He earned first place in bread bakery at the Coupe du Monde in 1996 and coached the gold medal-winning American team at the International Baking Olympics in 1999. His reverence for bread is quiet, almost subliminal. What stands out is his utter faith in the science of baking.

This attitude can be a shock for students who attend his baking classes, such as the one held two weeks ago at Ramekins Sonoma Valley Culinary School. Ponsford’s weekend “clinic” is less about research than it is about detox and rehab: home bakers have to let go of baking habits that have sustained them for so long.

The class opens with a half-inch-thick packet and a barrage of timing and temperature: room temperatures, water temperatures, friction temperatures (the heat added to the dough during the mixing process).

This turns out to be the easy bit.

Ponsford then launches into Baker’s Percentages, the formulas for bread recipes that are based on the weight of the flour, with all other ingredients noted as percentages of the flour weight. This weekend’s loaves will have 70 percent hydration, that is, water is 70 percent of the flour weight. Salt is 2 percent, yeast is 1 percent. (Calculations must include the weights of ingredients in the pre-ferment, or starter.) Flour, water, salt, and yeast are all that ever go into a French loaf, but the variations and fluctuations in the formula are endless.

At this point, most class members are staring at the white board in some dismay. Though the muttering is indistinct, the meaning is clear: What do all these numbers have to do with bread?

It’s a good moment to move from theory to practice, and Ponsford moves to one of the work stations to weigh pre-ferment, flour, water, and salt into the mixer bowl. His mixers at Artisan handle 500 pounds of dough at a time; this one protests at five pounds, even when Ponsford carefully jacks the bowl up and down to more evenly mix the dough. Still, it takes only a minute or two before the dough is placed in a bowl, sealed in plastic wrap, and set aside to rise.

Now the home bakers eagerly huddle around their work stations, looking like high-school science students in their white aprons and with their smudged notebooks. Some have come from as far away as Oregon and Massachusetts to stare intently into the grinding maws of the mixers.

They don’t want to miss a thing.

AFTER THE DOUGHS have been set out for rising and the students take a quick break for lunch, Ponsford moves on to the much-anticipated critique session of the breads that the students were asked to bring to class. He starts with a soft-crusted French loaf, squeezes and hefts it with practiced fingers, then holds it to his nose, looking for all the world like some kind of bread psychic.

“Our doughs today were wetter than you’re used to, huh?” he asks, raising his eyebrows at the woman who brought the loaf. She nods–yes, a lot.

The pale bottom indicates insufficient heat from the stone. A pizza stone is the culprit, and Ponsford shakes his head sadly–it just isn’t thick enough to retain heat when the cooler loaf of bread hits it. Ponsford cuts open the loaf to reveal a very dense crumb, a very fine pattern of airholes that some people like, but are death to the classic definition of French bread. A dry dough like this means the dough is less elastic and can’t expand to accommodate the yeasty gases. “Don’t be afraid of wet,” he says, not for the last time today. The woman nods seriously, taking notes all the while.

Ponsford moves on to the other loaves, which range from a rustic ciabatta, whose charming crust hides streaks of unblended flour, to a stubby, anemic-looking baguette that he half-jokes about breaking the bread knife on. As he makes his way through the heap of hopefuls, Ponsford keeps asking the bakers about the recipes. They either don’t remember or they give him measurements in cups. “I can’t tell you what’s going on with these breads,” he says, setting aside a brick-shaped whole-grain loaf.

“I need to see the percentages.”

It’s the end of day one, and by this time most of the students’ doughs have overrisen, but no one objects to a quick shaping lesson before class adjourns. The dough is floating and soft as a cloud, but Ponsford merely folds it gently to increase its body. “I’ve never punched a loaf of bread in my life,” he says, deftly turning the dough mass and cutting pieces away for shaping.

“Punching is from a tradition of building up bread to handle machinery. It makes a strong dough, but it’s too tight for the gases to do their work properly.”

He quickly models batards and baguettes, his hand and thumb moving as fast as a sidewalk magician’s. “Don’t worry,” he says to the bakers crowding around him to stare at his hands. “Tomorrow at the bakery, you’re each going to have the chance to shape at least 10 or 15 loaves of bread.”

After class, Ponsford admits that it’s probably not fair to have them bring in their bread on the first day. “They’re bringing in everything that I trashed earlier,” he says, stretching his flour-dusted work boots in front of him. “But I don’t feel bad about knocking them a little bit, because if they listened to anything I said, they’ll have 100 percent improvement the very next time they bake bread.”

PONSFORD’S confidence is borne out the next day, when the students take their loaves out of the commercial-sized ovens at Artisan Bakery. They had arrived at the bakery at 7 a.m.–a lucky few had to get up at 1 a.m. to feed the pre-ferment.

Now, just before lunch, the fruits of their labor are coming out of the oven, golden and beautiful. Ponsford cuts open a few loaves, cautioning against making a quick judgment–“You have to taste it cold. Even Pillsbury dough tastes great to me out of the oven”–but the effects are apparent immediately, in the sturdier crust, the larger holes. There is some variation, of course, with four fermentation processes and 14 pairs of hands, but the improvement is easily 100 percent.

Over lunch, the students are tired, but enthusiastic about the results. Harvey, a civil engineer from Walnut Creek, says he was most impressed by the weighing of ingredients. Before, he used cups, and the results varied so much. “There was no precision, no real understanding of why I was doing it.”

Cindy, a homemaker from Sonoma, agrees. Though she’ll continue to use her whole grains and honey, any technique is an improvement. “You can read a book a thousand times, but you won’t understand what tacky or shaggy is,” she says, chewing tiredly on a cold piece of pizza. “There’s nothing like watching a baker do his stuff.”