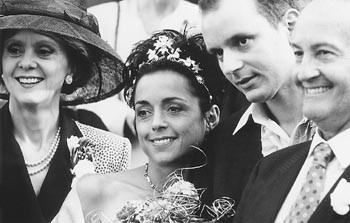 “WAR IS LIKE LOVE,” wrote Bertolt Brecht. “It always finds a way.” But somehow the survivors endure–even prosper–just beyond its shadow, suggests Jasmin Dizdar in Beautiful People, his kaleidoscopic portrait of a group of Bosnian refugees trying to make sense of their new lives in London, circa 1993.

They’re strangers in a strange land, and their sense of wonder and confusion is succinctly captured in a film that applies comedy like a salve and accepts the deepest absurdities as routine occurrences. From its opening, in which two passengers brawl on a packed city bus, to the scene in which a naive housewife discovers heroin in her son’s jeans, takes a sniff, and proceeds hanging laundry, stoned out of mind, the film creates a tableau of wildly intersecting lives in which anything can happen, and does.

Drawing on a huge cast of characters, the former Yugoslavian writer/director takes on the human condition and the way synchronicity sometimes creates order out of chaos. It’s a style of storytelling commonly associated with Robert Altman, although Dizdar’s vision is not quite as sprawling and considerably shorter, at a mere 107 minutes. The result is a film that leaves you wanting more.

As it turns out, the transit hooligans were former neighbors in Bosnia, one a Serb, the other a Croat. Their passion-driven fisticuffs lands them both in the hospital–in the same room. Beside them, a sour-tempered Welsh anarchist stews in his own political agenda.

Angered by the bourgeois gentrification of his poor, yet picturesque village, the anarchist had attempted to firebomb some luxury vacation homes–the one plot that literally blew up in his face. Now his task is to keep his irrational roommates from killing each other–a pointed reference to the way war is more a state of mind than a point on a map.

The film’s other characters include the black-sheep daughter of a politician, her penniless ex-Yugoslavian beau, a BBC reporter whose latest trip to Bosnia brings on a spectacular nervous breakdown, and a harried OB/gyn (and father of twins) in the throes of a nasty divorce. The relative insignificance of Dr. Mouldy’s marital turmoil comes into sharp focus when he meets a young refugee couple who beg him to kill the baby he is about to deliver–a child conceived of rape.

Whimsical, tragic, but ultimately hopeful, Beautiful People is an intelligent, though flawed look at life after wartime. Particularly clunky is the too-rapid redemption of some fairly unredeemable characters in the film’s final moments–a regrettable dip into blatant sentimentality. Still, Dizdar is first-person-familiar with the material’s emotional landscape, so it’s hard to fault him for celebrating survival. Dr. Mouldy sums things up nicely in the film’s final line: “If life changes just a little bit in your favor, it can be so beautiful.” Lying in a cradle nearby is a cheerfully gurgling infant. Her name: “Chaos.”