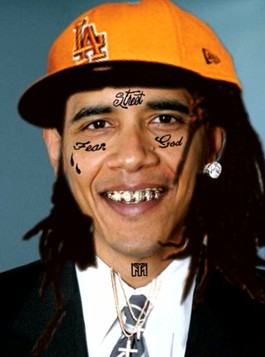 How will Obama's presidency change the face of hip-hop?

What I always say is that hip-hop is not just a mirror of what is. It should also be a reflection of what can be.

It was Barack Obama’s last unofficial policy announcement on the campaign trail. On the weekend before the election, asked in an MTV interview to explain his position on laws restricting certain hip-hop fashions like sagging pants, Obama nailed the issue. He quickly stated that laws banning sagging pants were a “waste of time,” adding, “Having said that, brothers should pull up their pants. You are walking by your mother, your grandmother, your underwear is showing. What’s wrong with that? Come on.

“Some people might not want to see your underwear,” he added. “I’m one of them.”

It was pure Obama—personal, funny, filled with sense and human trust. It was also lurking in the back of my mind for days, even as I watched Barack Obama address a crowd of 240,000 in Grant Park a few nights later as the new president-elect. I was shaking inside, I was tearing up, and yet I couldn’t stop thinking about brothers pulling up their pants.

Where is hip-hop headed with Obama in the Oval Office? He’s stated his concerns about bitch-nigga-ho gangsta rap, and, it seems, sagging pants, while at the same time earning the across-the-board respect of the hip-hop community. Under his presidency, will hip-hop get more Obama-like—idealistic, compassionate, intellectual—or will the divide between “socially conscious” hip-hop and “gangsta” rap widen even further?

Like the country itself, rap and hip-hop could use some unifying these days. Roughly only 2 percent of all adults over the age of 35 like rap; about 26 percent of them like hip-hop. A far greater percentage of them will admit they like something called “socially conscious hip-hop,” which is basically the Joan Baez of rap music, an utterly inoffensive derivative of a revolutionary art form which sets out to change the world by rapping about hemp production and Mumia Abu-Jamal.

Considering how Obama has inspired Americans to be good simply by telling them that they are good, he could very well spin rap and hip-hop into better territory with the same positive reinforcement. By stating in a recent BET interview, “The thing about hip-hop today is it’s smart, it’s insightful,” Obama makes a self-fulfilling prophecy. After hearing Obama’s take on MCs—that “the way that they can communicate a complex message in a very short space is remarkable”—who among the rappers of the world wouldn’t want to try to succeed at that very thing?

And yet Obama, who cites Jay-Z and Chicago natives Kanye West and Common among his favorite rappers, is still critical. “There are times where, even on the artists I’ve named, the artists I love, there’s a message that’s not only sometimes degrading to women, not only uses the n-word a little too frequently,” he pointed out on BET earlier this year, “but also something I’m really concerned about is they’re always talkin’ about material things, always talkin’ about how I can get something, how I’ve got more money, more cars.”

These are all valid concerns, and ones that have all been debated to death with little result. The track record so far has shown that hip-hop will continue to do whatever it damn well pleases. But when Obama weighs in, the scales tip. There are plenty of people in hip-hop—DJs, MCs—who would do just about anything Obama tells them to do.

Should artists in a uniquely American art form based primarily on free expression self-censor their lyrics or change their clothes because the leader of their government suggests they do? It’s a harrowing thought, going against the very roots of the music. Just as Obama can’t deny the over-the-top performances of his old pastor, he also can’t deny hip-hop’s performance edge, its bite, its need to inflame and to beat its chest. What Obama can pull off, however, is a game-changing hat trick: to not tell the hip-hop community what to do and not do, what to say and not say like so many before him, but rather to lead and inspire by setting an unprecedented example.

In the BET interview, Obama seemed like he was carefully tempering his answers. His safe and measured responses underscore a big question running through the hip-hop community, and Obama seems keenly aware that his actions must answer it correctly lest he suffer a backlash. The question is whether the change that Obama brings will actually benefit the black community or merely convince white America that black people aren’t all that bad. And if the former, will hip-hop follow suit?

You can’t be using the b-word, the n-word, the h-word when you have Barack Obama redefining overnight the image that black people want to have. Here’s the greatest political victory in the history of black America, and the thug rappers can’t come near it. They will have to change or become irrelevant.

A lot of people from Obama’s generation won’t ever be able to accept certain hands-off words the way they’re used in hip-hop: as mere building blocks of a much larger house. They’re bad words, but bad words have always been used in hip-hop for a positive message. Yes, they’re inflammatory, but as has been pointed out time and again, it takes inflammation to catalyze change, especially if it’s a higher profile reflection of low-profile injustices.

But times changed overnight on Nov. 4; we’ve come a long way since N.W.A.’s Straight Outta Compton. Gangsta rap was biggest from 1989 to 1992, a time when blacks needed a new voice. Now that their voice, once relegated to an urban soapbox, has reached the highest level of office in the country, we could start hearing real conversations instead of posturing pronouncements intended to inflame.

Some of these real conversations were started, in fact, by Obama himself. In early 2008, the jokester rapper Ludacris appeared on a mix tape by DJ Drama for a track called “Politics as Usual,” professing his support for Obama but calling Hillary Clinton a “bitch.” Instead of issuing a statement about it, Obama called a personal meeting with Ludacris to discuss the matter. Ludacris kept the details of their meeting private, but said after the election, “Now that Barack has won, I can honestly say that we are all fortunate to witness a period in America’s history when we rose to our best.”

When asked why he’d named Jay-Z’s American Gangster as a top pick in hip-hop, Obama struggled. “You know, it tells a story,” he said, which is a less than insightful reason to cite for liking a concept album that’s based on a movie. If even Obama can’t find anything below the surface of Jay-Z’s raps, it’s worth wondering if there’s anything there.

Looking at Jay-Z’s recent output, there’s a pronounced lack of innovation. Since the turn of the century, after payday hits like “Hard Knock Life” and “Big Pimpin’,” Jay-Z has thought of rapping as an afterthought to his record label, Roc-a-Fella Records, his clothing line, Rocawear, his ownership in the New Jersey Nets and his $150 million deal with Live Nation. Jay-Z’s residence on the hip-hop stage is more of an exciting presence than a pioneering one, imparting, not unlike Sarah Palin, an “energizing” quality.

Common, who is generally cited as the first rapper to include a lyrical reference to Obama, on a 2005 remix of Jadakiss’ “Why,” has a new album out, Universal Mind Control. It includes just one reference to the president-elect, a track, “Changes,” that pairs the line “See a black man run, we need him to win” with a spoken-word outro that attempts to equate Common’s stature with Obama’s. The rest of the album is mostly a horny rapper’s attempt to find less crude ways to say he wants to get laid. The record’s defining moment comes when Common, during the song “Sex 4 Sugar,” cuts the beat silent and raps in all earnestness, “I’m’a touch you where the sun don’t shine!”

It’s a sad decline. Consider Common’s 1992 track “I Used to Love H.E.R.,” where he interestingly intertwined women and hip-hop, or for that matter, 1997’s “Retrospect for Life,” where he extended his respect to women who’ve had abortions, or 2005’s “Faithful,” where he interweaves women and God. All of these songs would be more fitting to our moment, and a sudden derailment into adolescent sexual teasing isn’t like him—it tastes of misplaced motives.

“I think hip-hop artists will have no choice but to talk about different things and more positive things,” Common told CNN after the election. “Even before Barack, I think people had been tired of hearing the same thing.” Common’s version of change is a PG-rated one, and to that end, he’s definitely pulled up his pants.

As for Kanye—oh, let’s not even get started.

Modern jazz has continued in this tradition, singing the songs of a more complicated urban existence. When life itself offers no order and meaning, the musician creates an order and meaning from the sounds of the earth which flow through his instrument.

Obama has stated his love for the “old school”—Miles and Coltrane, Stevie and Marvin. And while their most high-profile fan is elevated to the highest chair in government, his favorite rappers have been falling off. That’s not to say that hip-hop is dead or that Obama is going to turn every rapper into a lovechild softie or that evolution and change in hip-hop won’t be sometimes hard to swallow. It will. It only means that, although we can look forward to the most with-it president in recent memory and certainly the only president who’s ever said he likes hip-hop, he’s still the president, after all. He can’t be expected to rock Immortal Technique, Ice Cube or Dead Prez.

With all of this considered, hip-hop can think of Obama as a really, really cool dad. He’ll trust hip-hop to be good, and it’ll occasionally live up to that trust. It’ll do things he disapproves of, but he’ll be tolerant, with measured criticism. It’ll probably see his point of view eventually, but in the meantime, even Obama knows there’s no reason to grow up too soon.

As long as there are things to say, hip-hop will find myriad ways to say it, including crudely. As long as there is injustice, there will be songs like “Fuck tha Police.” The sweeping change in hip-hop that parents and conservative groups are predicting—it’s a nice thought, but it isn’t going to happen. As Def Jam founder Russell Simmons said earlier this year, even hip-hop is election-proof. “Young people will use their language the way they want,” he said. “If it’s in their heart, they will express it.”

So, brothers, maybe pull up those pants. But just a little.