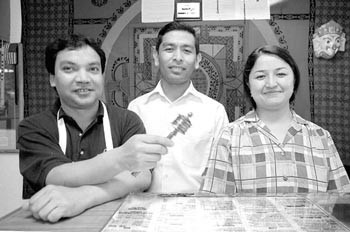 Mountain menu: Fans of Nepalese cuisine have something to rave about with the advent of Himalayan Chhahari in downtown Santa Rosa. Pictured are chef/owner Raju Mothe, Yagya Shrestha, and Sujana Shrestha.

Savor the exotic at Himalayan Chhahari

THERE’S NOTHING like traveling to foreign parts vicariously through the simple act of eating at ethnic restaurants, where a mere menu can become your passport to exotic sights, textures, aromas, and flavors.

While I was growing up in London in the 1970s, the United States was considered the coolest place on earth and American food was the most exotic of all. The high school kids in my class took to wearing jeans, sneakers, and T-shirts emblazoned with that annoying swirly red Coca-Cola motif. They snapped bubble gum and devoured American Graffiti at the cinema.

A new place opened up in my residential London neighborhood–a real American restaurant! The first we’d ever seen. It was a glitzy place called W.C. Fields, and the walls were covered with photos of the drawling comedian.

Every Thursday night, my friends and I would frequent this combination burger joint/deli/soda fountain. We’d dine on novel items like crispy potato skins, Buffalo wings, chili-cheese burgers, and strawberry shortcake. We’d dream we were in L.A. or the Big Apple.

Of course, now that I’ve lived in the states for many years–those items have lost their mysterious allure. But I’m constantly on the lookout for other unusual eateries that can take those trusty old taste buds on tour.

When Himalayan Sherpa Cuisine, a small, no-frills eatery opened on the outskirts of Glen Ellen a couple of years ago, the place really satisfied this culinary wanderlust. The scene featured Himalayan posters and artifacts, haunting bell-like music, and hearty dishes bursting with unusual flavors. When the Sherpa owners brought us steaming cups of fortifying milky chai tea–redolent with cardamom, cloves, and fresh ginger, on a freezing day after a long hike in Jack London Park one afternoon–we closed our eyes, inhaled the scents, and imagined we’d successfully reached Base Camp.

The Sherpa place closed last year, but our addiction to the colorful diverse Nepali cuisine, which uses tantalizing flavorings like cumin, cardamom, green, and red chilies, garlic, ginger, fenugreek, Szechwan peppers, and scallions, was as strong as ever.

Now, that too, has closed and a new Nepali restaurant has been born in its location.

Himalayan Chhahari is a casual, comfortable place with friendly service. A new carpet, fabric-covered archways, and red-painted wall trim give a warm effect. There are posters of Nepal on the walls, and sitar music plays softly on the sound system. Diners can be seated either at regular tables or (more interestingly) on the floor, sans shoes.

The wine list is minimal and not properly described on the menu, so stick to imported Indian beers, like Kingfisher or Taj Majal ($3).

Appetizers include momo ($4.25), steamed dumplings stuffed with ground chicken and herbs served with tomato pickle. Although these are pretty good, we’d like to see a vegetarian version also on the menu, such as the tasty spinach-cabbage momo served at the defunct Sherpa place.

The alu chap ($3), deep-fried mashed potato with chopped onion and cilantro served with sweet-and-sour tamarind sauce is a mouthwatering appetizer that smells as good as it tastes.

We sampled an array of curries: mixed vegetable curry ($7.50), including carrots, green beans, and broccoli; chicken curry ($8.95) with onion gravy, tomato and ginger; and fish curry ($11.95), described as red snapper cooked in a rich curry sauce, but actually large chunks of moist salmon.

But all the curries were too tame. For example, the fish curry would have been more exciting livened up with some ginger, whole spices, and scallions.

The chana ko dal ($6.95), a dish of garbanzo beans cooked in olive oil with fresh minced ginger and garlic, which has a souplike consistency, is very satisfying and flavorful.

Another winner was the fantastic garlic nan bread ($1.75), fluffy pillows that are cooked in the tandoor oven and emerging dry and deliciously chewy.

For dessert, try the kulfi ($2.50), homemade Nepali-style ice cream with raisins. It has an unusual icy-custard texture. Or try the kheer ($2.95), a mildly sweet rice pudding with a slight rosewater flavor prepared with coconut, raisins, cashews, cinnamon, and cardamom.

THE LUNCH BUFFET is an unbeatable bargain. For $5.95, you can load your plate (as many times as you like) with smoky succulent tandoori chicken; steamed basmati rice; chicken curry; garbanzo beans; lentils with whole spices; cauliflower and potatoes cooked with tumeric; and red potato and yellow squash curry. Plus green salad, nan bread and an assortment of interesting condiments, including mango chutney, cucumber raita, hot green chili and mint sauce, and sweet-and-sour tamarind sauce.

And while the food in general tastes far less complex than the old Sherpa Cuisine restaurant, Himalayan Chhahari chef Rajul Mothey is so pleasant and accommodating, we’re sure he’ll spice up the dishes on request to send you on that culinary journey.