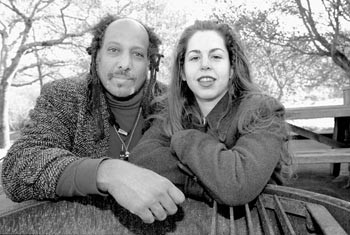 No room at the inn: Maceo Campbell and Michal Pincus moved to the county five years ago in search of affordable housing. Instead, they found escalating rents and landlords who charged exorbitant rates for substandardshelter.

FIVE YEARS AGO Michal Pincus and her partner, Maceo Campbell, were driven out of San Francisco by the high rents. The two headed for Sonoma County, which seemed like a perfect spot for artist Pincus and environmental activist Campbell. For $400 a month, they rented a funky trailer in Sebastopol, with a solarium and a tree growing through the roof.

The first big blow to the couple’s North Coast dreams came just a year later. It wasn’t that the trailer baked in the summer and the rain and wind came in through the leaky roof in the winter. Or that the trailer had only a small wood-burning stove for heat.

The kicker was cost.

Pincus suffers from chronic fatigue syndrome, but was unable to qualify for disabilzity benefits, and Campbell’s salary couldn’t cover the trailer rent. The two soon discovered that they were priced out of the market everywhere in the county. “We were basically homeless for a couple of years, on the couch-and-floor tour. We even lived in a tent for a while,” Pincus says.

When her disability claim came through last year, Pincus figured the two would be able to afford a studio cottage at the low end of the rent spectrum. Wrong.

“Right after I got approved, I looked in the paper and, man, the carrot got moved. It’s just gone up, up, up,” she laments. “The whole thing almost has become like a comic farce. I followed up on one place that was listed for $500. It was a converted chicken coop, with no insulation. They had a line of people coming to look at this place.”

What the two could afford was an attic room, with ceilings so low that both had to stoop to move around. The landlord, says Pincus, did them a favor by giving them a month’s free rent before starting to charge $300.

“We paid it because we had to. Part of me was so beaten down and so sick, and part of me was furious,” she says. “What makes people who have money better than me so it makes it OK for me to have to live this way?”

Caught Behind the 8 Ball: Local rental market a jungle for low-income tenants.

PINCUS’ STORY isn’t all that unusual, at least in Sonoma County. Just about everyone, it seems, has a housing nightmare to share. Eviction for no good reason. Rent hikes three, even four times in one year. Three people squeezing into one room to make ends meet. A hundred prospective renters showing up for an open house and engaging in a bidding war that drives rents even higher.

These days the notion of a cute little wine-country garden cottage for $500 is quaint, if not downright laughable.

The local economy is booming. The population is growing. The job market is beckoning. The real estate market is red-hot. But there’s a price to pay for success: Welcome to the stratospheric rental market.

Almost half of the county’s renters pay more than 30 percent of their income on rent, an amount that the federal Department of Housing and Urban Development deems “unaffordable,” resulting in tenants neglecting such necessities as medical insurance, clothing, and food.

The average rent for a studio in Sonoma County has gone up almost 13 percent in one year to $591 a month, according to RealFacts, a Novato-based company that analyzes real estate markets. A three-bedroom, two-bath apartment is going for an average of $1,227 monthly, an increase of more than 14 percent.

Vacancy rates are so low that it’s not unusual for landlords to get dozens of applications for a single apartment. One recent survey found only one vacancy in 1,118 apartment units in Petaluma, and only three vacancies in 2,298 units in Rohnert Park–approaching an almost unheard-of 0 percent vacancy rate. The overall vacancy rate in the county hovers around 2 percent. Affordable-housing advocates and real estate experts agree that a 5 percent vacancy rate is the watermark of a healthy market that benefits both renters and landlords.

“When the market is as tight as it is now, the market responds by increasing the price,” says Scott Gerber of Marcus & Millichap, a commercial real estate brokerage in San Francisco. “It’s not like landlords are trying to gouge people. There’s a long line of renters out there trying to rent. People are offering to pay more money.”

The good news, says Gerber, is that apartment construction is on the upswing. “If more housing is added, it will stabilize the rent and the vacancy rate will climb.”

Several hundred units of student housing are coming in Rohnert Park, which should relieve some of the demand for housing around Sonoma State University, Gerber says. And in Santa Rosa, city officials in 1998 approved permits for 600 units of housing.

“When vacancy rates are higher, people are not going to build apartments in that market, because it decreases the chance of having a successful project,” says Santa Rosa Community Development Director Wayne Goldberg. “The last time we had a huge burst of multifamily construction was in the mid-1980s, when the tax laws were favorable and vacancy rates were low, which made it profitable.”

Among the projects on the drawing board in Santa Rosa are 287 apartments on Highway 12 just east of Mission Boulevard, about 100 apartments in the downtown area, and 176 apartments at the Mountainview Villas.

But for people like Pincus, many of the apartments coming on line are hardly affordable, charging upwards of $1,000 a month for a one-bedroom apartment.

When Colleen Fernald Molinari’s landlord wanted to sell the southwest Santa Rosa house she was renting with her husband, a local high-tech-industry worker, and two kids, the family was forced to settle for a smaller three-bedroom house, with almost no yard, and fixer-upper frustrations. The monthly rent? $1,475, almost 50 percent more than they were paying for a roomier, more upscale place.

Molinari, who works in production and distribution at the Independent, says they can’t afford Sonoma County rents. “People stuck in the middle like us have it the hardest. We make too much to qualify for special programs, but not enough to get out of debt,” she says. “We live really frugally. We don’t go on trips. We don’t even go out. Our routine is a video and a grocery store pizza on a Friday night.”

Indeed, Molinari was on the verge of moving to Austin, Texas, last summer, where “you can get twice the home for the price.” But the move fell through, and the couple is now struggling to keep up with the high cost of living locally.

THE TIGHT HOUSING market means more calls for Sonoma County Rental Information and Mediation Services, a publicly funded program that tries to resolve disputes between landlords and tenants. These days it’s about evictions, rent hikes, and desperate pleas for help in finding places to live.

“We get a lot more calls from people that can’t find housing,” says SCRIMS executive director Sherry Couts. “All we can do is refer them to the newspapers and property management firms.”

Tenants can’t believe that multiple rent hikes are legal, says SCRIMS operations manager John Shaw. “We’re coming up against people who think there is rent control. There isn’t. A landlord can raise the rent 2 cents or $2,000, and can raise it every month of the year.”

And if a landlord wants a tenant out, 30-day notice is the only requirement, no cause needed. “That can be really devastating,” Shaw says. “You won’t get another apartment with an eviction on your record.”

SCRIMS is a barebones operation, with one full-time and one part-time employee, aging equipment, and dwindling funding, trying to do mediation for a county of half a million. In a rental market that is increasingly hostile for tenants, SCRIMS doesn’t have the resources to keep up with demand, says David Brigode, housing director at People for Economic Opportunity.

“We have to come up with a new approach to deal with private-sector housing, a better tenant-landlord program, a better fair-housing program,” Brigode says. “People don’t know their rights, or are scared to exercise their rights. . . . There’s no outreach to other agencies or to farm workers to educate people.”

Brigode says that this spring PEO will be vying for SCRIMS’ funding contract from the county and the city of Santa Rosa. PEO, along with Fair Housing in Marin County, already received a $300,000 grant from Housing and Urban Development to do education, outreach, and fair-housing enforcement.

The need for a more aggressive approach to rental mediation is urgent, Brigode says. “Housing is nowhere near job growth,” he says. “It’s like musical chairs. The music stops and someone is left homeless.”

MICHAL PINCUS and her partner did find a way out of their attic garret. They now live in a converted garage, sharing a bathroom and kitchen with six other people. The rent is $400 a month, and the landlord is a friend. But she still dreams of finding a place of their own that’s affordable and livable.

“It’s depressing,” she says about the rental market. “We really have to look at what we’re doing here, and at the greed that’s dictating how we’re making our decisions. It’s changing the face of Sonoma County. You’re driving out people who don’t have a lot of money.