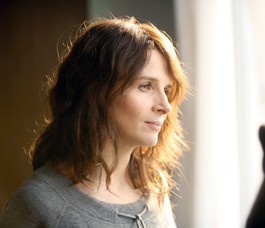 In his new film Paris, writer-director Cédric Klapisch takes up his study of the city from where he left off in When the Cat’s Away. That film ended with Garance Clavel’s Chloé shouting out to her Bastille neighborhood from the top of the July Column—trying to call back everything being lost to redevelopment.

In Paris, Klapisch takes to the heights of the city again, only this time on all sides—Montmartre, the helipad at the Tour Montparnasse, the Eiffel Tower—to watch over a metropolis becoming less recognizable to him every day. The director probably should have completed his theme by putting a camera on a construction crane, pulling up one of the new steel and glass buildings making the City of Light look like any other city.

There is one more view from a great height—the top floor of a Haussmann-era building on a steep hill in working-class Ménilmontant, directly above Gambetta Métro. There, a former chorus dancer at the Moulin Rouge, Pierre (Romain Duris), is mortally ill with a heart condition. He is the center of a web of people—yes, Paris is another dreaded tag-team movie, but Klapisch insists on informal, glancing links between the people, a democratic caroming off of the locals, regardless of class.

Paris is fundamentally loose and flexible, rather than overdetermined and message-heavy. Pierre’s sister, Élise (Juliette Binoche), a social worker, moves in to nurse Pierre, bringing her brood of charming, fatherless children. The movie pulls away from this ménage to see the neighborhood, just as Pierre watches from his high window because he can’t take the stairs with his bad heart.

The film is like a pile of jackstraws, rather than a solid structure; the loosest ends are the subplots in Cameroon and North Africa, where new immigrants are trying to get to where the euros are.

There’s so much ambient talent here that Klapisch finds something interesting in every angle. Binoche’s beauty grows more lush as she ages, a charm that’s amplified by deliberate goofiness, like her striptease out of layers of winter clothes. In a smaller role, Karin Viard is as comical as Kristen Wiig, playing a riotously bigoted bakery owner. The back-and-forth teasing that goes on in a street market is the alternative to her arch old-school politeness.

The ace comic actor Fabrice Luchini plays a Sorbonne professor with the culturally significant name of Roland, who is trying to take the liberal view of change. In class, Roland insists that the tensions between past and present energize a city. He maintains a correct, logical view of his own crisis: his urbane denial of grief over the death of his 95-year-old father, whom he just buried in Père Lachaise. He has harshly logical dealings with his brother, an architect helping to build the new Paris.

Roland is undone by temptations: first, to make some money on a TV documentary series on Parisian history. The job means the give and take of “democratization” (the nice way to say “dumbing down”). On the one hand, he gets to introduce viewers to the room where Baudelaire wrote “Invitation to the Voyage”; on the other, he has to interact with a costumed actor pretending to be Baudelaire, bowing to viewers. Perhaps as a coping mechanism, Roland falls for an irresistible student half his age (Mélanie Laurent, a cruel-looking stunner) with predicable consequences.

Filling up a screen with Paris is always an excellent strategy. Due to the gloaming overcast, it seems like it’s the magic hour there 24 hours a day. Klapisch makes this a thoughtful, optimistic study of a city’s ever-constant decline and refreshment through the arrival of new blood and the ebbing of the old.

It may have just been the cityscapes that got me; the winter views from that high window in Ménilmontant, with the distant Tour D’Eiffel lit up like a roman candle for Christmas, will break your heart. But I’m wondering for the dozenth time why no one seems to be able to make a movie this good about San Francisco, with its similar depths and heights, its crotchety long-timers and brash arrivistes, and the similar tensions between the beloved old and the threatening new.