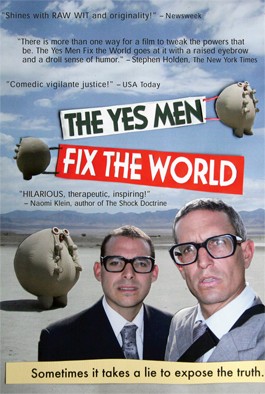 I was a Yes Man for a Day

The Yes Men, a group of activist pranksters, specialize in “Identity Correction,” which translates to “impersonating big-time criminals in order to publicly humiliate them.”

The guerrilla theater group caught the nation’s attention recently with a fake press conference in the name of the U.S. Chamber of Commerce. Pretending to speak for the U.S. Chamber of Commerce, the Yes Men’s Andy Bichlbaum announced to the assembled press that the Chamber had switched its position on global warming and would stop opposing the Kerry-Boxer climate bill. They also pretended to speak for Dow Chemical, telling BBC News that the company would be taking full responsibility for the catastrophic 1984 methyl isocyanate leak in Bhopal, India.

The first time I ever heard about the Yes Men, two words popped into my head: Igor Vamos. Igor cofounded the Yes Men under the assumed name Mike Bonnano. He and I were in college together. Igor was a big part of the Reed College Guerrilla Theater of the Absurd.

Yes Men stunts are the focus of their new feature-length movie, The Yes Men Fix the World, which is currently screening across America and Britain. The Yes Men Fix the World shows the planning and execution of several impersonations and other bits of mischief, like product demos for the “Survivabal,” a suit that looks like an overinflated cow’s udder and is supposedly designed to help corporate CEOs withstand climate change. (“A gated community for one.”)

When Vice President Dan Quayle came to Portland in 1990 to give a speech, I served as one of Igor’s “Reverse Peristalsis Painters.” Peristalsis, of course, is the series of muscle contractions that move food through the digestive system.

We assembled in a downtown parking garage, donned cheap business suits and gorged on either red, white or blue food-colored instant mashed potatoes. I ate blue.

As we left the parking garage, we drank ipecac, the vomit-inducing syrup. Then we marched to the venue, lined up on the street in order of the color of mashed potatoes we had eaten (red-white-blue, red-white-blue, etc.). We stood there casually until the ipecac had its effect. Then there was a red, white, and blue stripe of puke on the sidewalk.

A Quayle aide later said, “We’ve never seen anything like it.”

With the Yes Men’s continuing hijinks, you may again.