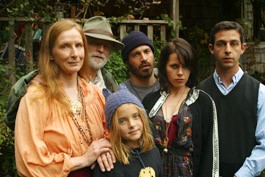 When a sad sack medical student who can’t even get his professor father to pass him in class stumbles across a beauty willing to bed him, it’s clear that we’ve stepped through the Looking Glass.

And indeed, Humboldt County, a sweet indie film written and directed by first-time filmmakers Darren Grodsky and Danny Jacobs, depicts a Neverland vision of the Lost Coast where physics professors abandon UCLA tenure to live off the land, all the ladies are pretty, and smoking an immense amount of weed leaves everyone with plenty of extra energy for climbing hilly secret dope plantations high in the national forest.

Peter (Jeremy Strong) is our sad sack and Bogart (Point Reyes native Fairuza Balk) our beauty. After their tryst, she asks him if he wants to take a drive. Groggy on sex, he agrees, only to wake up hundreds of miles north in the wilds of Humboldt County. There we meet Bogart’s extended family, Jack the psychics prof (Brad Dourif, sporting only a few front teeth), earth mama Rosie (Frances Conroy of Six Feet Under) and the angry Max (Chris Messina), a farmer with a secret and a young daughter to protect.

Initially horrified by the profligate drug use, Peter gradually sinks into the fog of Humboldt life, outhouse and all. It’s summer and the fall harvest is large on everyone’s minds, particularly Max’s as he’s hoping to cash out a huge crop come autumn.

What Humboldt County does well is to show such small touches as how the community pays for the local French-immersion public school for its darling dope kids; what it does horribly is to depict marijuana farming on national lands—with its lack of sanitation, reckless highland camping and degradation of area streams—as a harmless endeavor; and what it does with ferocity is to underscore the immense waste of the government’s expensive war on pot farmers.

While Humboldt County contains such jaw-droppers as Rosie’s passionate recounting of her first husband’s death (he attempts to overcome the DTs with LSD and ecstasy and then decides to go for a drive) as though it were a mystical experience, this is a sweet film about high country life that will be of immense interest—to Humboldt State University alumni.