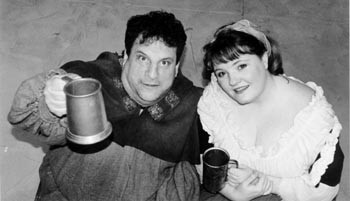 A LONG TIME AGO, on a stage far, far away–ages before Star Wars and long before the upcoming troika of Lord of the Rings flicks–William Shakespeare was busy inventing the epic trilogy with his trio of history plays: Henry IV, Part 1; Henry IV, Part 2; and Henry V.

Directed by Deborah Eubanks, this production of the first installment of the Henry plays (which has been enhanced by adding a few lines from the other two plays in the series) is more concerned with the reformation of wayward Prince Hal (Jereme Anglin) than with his royal father, Henry Bolingbroke (soberly played by Lucas McClure), for whom the play is named.

Hal is a waggish wastrel who cavorts with thieves, drunks, and whores before “going straight” to quell the attempt of the young Hotspur (Rick Codding) to depose the king.

Anglin’s rebel-with-a-crown is an adept portrayal of the “nimble-footed madcap Prince of Wales” drawn so absorbingly in Shakespeare’s text. The actor employs a decidedly subtle approach as his character incrementally inches toward salvation. Instead of an aboutface from his once ne’er-do-well self, Hal evolves organically through a series of well-paced revelations that add credibility to his character arc and testify to Anglin’s stage-borne skill.

Al Liner’s fustian Falstaff has all the chutzpah of a New York City cabbie and a more innate understanding of the human heart than a cardiologist. Both riotous and disquieting, his rendition of Plump Jack’s famed “What is honor?” monologue marks an exquisite moment for local stages as he deftly treads the tightrope from humility to humanity before passing out drunk in the arms of a wench.

Rick Codding’s Hotspur–despite the “space-villain” duds designer Maureen O’Sullivan garbs him in–is a consummate depiction of a young man racked by his own ambition. Slicker than a sociopath with a charm-school certificate, Codding’s Hotspur is a note-perfect creep. This is one of the production’s breakout performances.

In a scene in Hotspur’s love lab, April Daniels shines as his wife, Lady Percy. She expertly traipses through a complicated array of emotions within the span of one finely crafted scene that is as much a credit to Eubanks’ direction as the players’ native panache. And Sean Casey’s comic, Pythonesque pepper-pot squawking as Westmoreland is well matched with Sam Misner’s ruddy-nosed rapscallion Bardolf.

Unfortunately, the swordplay between the various players that comes at the climax of the second act is a bit of a misstep, often looking like what would result if the Three Stooges did the Ginsu Knives commercials. And though this production is certainly more of a “sleeper” than a yawner, the fact remains that it sometimes seems like more of an endurance test (for both the actors and the audience) than entertainment as it creeps around the three-hour mark despite the obvious pains Eubanks took to prune the behemoth into a tidy evening of theater.

In the end, however, the production is more pensive than ponderous and, like the profligate prince’s line “redeeming time when men think least I will,” it also redeems itself with the sheer talent of its cast.