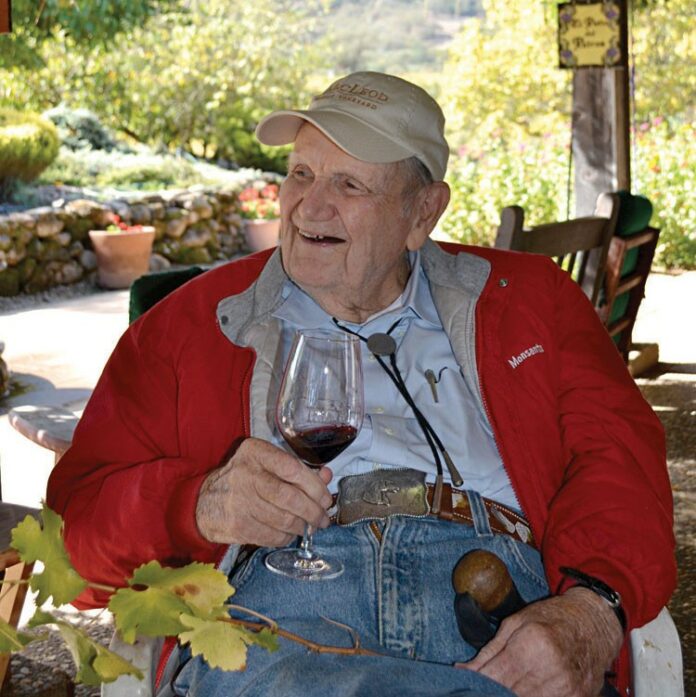 George MacLeod doesn’t spend a lot of his time moving rocks around anymore. It isn’t just that, at the well-earned age of 95, he prefers to sit in the shade of “El Patio de Patron” and sip his estate-grown Sauvignon Blanc, instead. It’s also that after 40 years of working with and listening to his land, he’s come to suspect that the rocks might be better off left in the ground, after all.

“I know the name and address of every one of these rocks,” says MacLeod, gesturing to a low stone wall that edges his patio.

After George and Greta MacLeod bought an uninhabited, overgrown ranch in Kenwood in 1974 as a retirement project, they spent several years picking rocks out of the ground and pestering their neighbors about growing grapes. The late Mike Lee, co-founder of Kenwood Vineyards, told them he could use some Sauvignon Blanc, which was enough for MacLeod, who says he tackled the project with the same attitude he employed as a company man at Monsanto—in that corporation’s least controversial, and long-since-jettisoned electronics division: “Yes, sir, I’ll get it for you!”

It proved to be a good match. “The Sauvignon Blanc fell in love with the terroir of this rocky soil,” says MacLeod.

Some 40 years later, after planting grapevines, then replanting after phylloxera, and finally launching an estate wine label, George MacLeod still speaks with enthusiasm and wonder about the history of this land, from the effects that prehistory had on the terroir, through Native American land management, and even the steady chip-chipping of basalt rock that was made into San Francisco pavers by Italian stonemasons over 120 years ago. MacLeod has published two books on the subject, and for years has contributed a column to the Kenwood Press in which he expounds upon a variety of topics and cites his Sauvignon Blanc and Zinfandel vines by name.

Tours of MacLeod Family Vineyards, often hosted by George’s daughter-in-law, Marjorie, include valley views and, usually, a visit with George. A reasonably priced visit, it’s also best suited to visitors who have some extra time in their schedule to explore and converse.

If MacLeod’s 2015 Sonoma Valley Sauvignon Blanc ($22) is a grassy Blanc, it’s a dry grass, with a sunlit streak of lychee fruit shining through. Toasty and red-fruited, the 2014 Sonoma Valley Zinfandel ($28) is spiced like Mexican chocolate, while the 2013 Sonoma Valley Merlot ($34) gets points for surviving the Sideways effect—the first vintage, according one of George’s colorful stories, had to be delivered sub rosa.