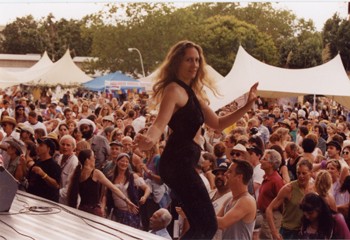 Let the Spirit Move You: Debra Giusti-Rose sheds her role as organizer for a few moments during the festival, as she takes to the stage to dance.

The Health and Harmony Festival is one of the North Bay’s premiere summer attractions. It didn’t get that way on its own.

It’s a performance space, an art gallery, a meditation center, a music festival, a health expo, a crafts marketplace, a forum for ideas and exchanges. It embraces counterculture, and yet it’s mainstream. It’s universal in scope, and it’s totally Sonoma County. Every year, the fairgrounds in Santa Rosa blossom into a beehive of positive energy as a sea of revelers young and old move from booth to booth and stage to stage.

Welcome to the Health and Harmony Festival, which this summer will celebrate its 25th anniversary. In human years, the weekend-long festival is now officially an adult. Like a child, it’s gone through demanding phases, adorable phases, and phases of gaining independence. Founder Debra Giusti-Rose has been with it through all of them–and like a mother, she came to a point where she realized the Health and Harmony Festival had to walk on its own two feet.

Giusti-Rose, a slender, composed woman
in her late 40s, was a 22-year-old Sonoma State graduate when she began the Health and Harmony Festival; her sandy brown hair was doubtlessly as long and flowing then as it is now. With this year’s festival right around the corner, she’s been putting in 16-hour workdays at the offices of the Association for the Creative Endeavor–formerly her west Santa Rosa home–though her calm, paced manner creates little impression that she’s at all harried.

“When I graduated from college, it was sort of the aftermath of the ’60s, so all of these ideas which have now matured and become part of a lifestyle were very passionate seed thoughts,” Giusti-Rose recalls. “And I was very much a part of that movement, even though I was in high school when the ’60s happened.”

Giusti-Rose grew up in Sebastopol, enthralled by the germination of progressive concepts that were sprouting up all around her. “I was definitely influenced here in Sonoma County. There were communes and spiritual teachers, so I was immersed in it. I remember asking in my own prayer and my own vision, ‘How can I serve this movement?'”

At that time, Sonoma State had its Spring Harmony Festival, “which was kind of the seed of Health and Harmony–it had music and crafts and that type of thing.” Giusti-Rose was part of the team that made the one-time event into an annual one. When Sonoma State decided not to do it anymore, Giusti-Rose and a partner took it to Sonoma County Fairgrounds and made it into a larger, public event.

Thus came about the first Health and Harmony Festival in 1978. “It was great and it was wild, free-spirited. We had a massage and healing center, and people were going naked getting a massage. . . . It was anything goes.”

The festival has expanded and refined itself just as society has expanded into the concepts that Health and Harmony celebrates. “When we started,” Giusti-Rose says, “eating health foods was weird, recycling was unheard of, world music was unusual. All of these things that we take for granted in our lifestyle were these weird, counterculture things. As time has gone on, we’ve seen these ideas seep into the mainstream, and all of a sudden it’s cool.

Sometimes even Giusti-Rose is surprised by how far-reaching the festival’s appeal is. “I go down the street to the mailing house and I see the little old lady who does the packaging, and she says ‘When’s that festival coming up?’ It’s really entered the hearts of a lot of people in this community. It kind of brings back the ’60s ideals, in terms of being creative and loving and having strong ideals for saving the planet and having a positive future. You kind of go back in time and also get renewed for what we can create now.”

By the 20th Health and Harmony, though, Giusti-Rose had come to the point where if she didn’t slow down, the festival would. After the first 10 years, her business partner had left, and Giusti-Rose was sacrificing her own personal life to keep the festival going. Nonstop work left no time for her to be her own person, and the discovery of a lump in her breast only solidified this reality.

“For my own spiritual health, I was just burned out, because there was so much juice going into [the festival],” Giusti-Rose says. So despite a terrific fear of speaking in front of crowds, she went onstage at the 1995 festival and announced that if members of the community wanted to keep the festival going, they would have to come together and make it happen.

“I’d raised [the festival] like a single mother would, put my heart and soul into it,” she says. “That’s a lot to hold for a singe person for 20 years, and it also does not allow for the vision of ‘Debra and her own life’ to have its own manifestation. So at that point I vowed to step away and let something else take over. I cut the umbilical cord.”

When a friend offered Giusti-Rose a nonprofit organization that she didn’t want anymore called the Association for the Creative Endeavor, the synchronicity was too much to pass up. Now independent of Giusti-Rose, the Health and Harmony Festival has been run by the Association for the Creative Endeavor since 1999. The organization has six full-time employees, six part-time employees, and a few dozen temporary employees who work around festival time, as well as a volunteer force of 300.

“Over a period of four years and now five years, people came forward. There was a renewed energy and vision within the organization. It’s really still my juice and energy that keeps it going, because you need that leader and that vision,” says Giusti-Rose. “But it’s got a lot of people pumping into it, which juices me up, because it’s not just about me. It’s like taking all of these paints of all these incredible ideas and then allowing them to go onto the canvas. That’s what inspires me now.”

Since letting go, Giusti-Rose has been able to see her creation come into its own through the ideas and efforts of others. The Eco-Village, the Goddess Temple, and a massage and healing center were added in the past few years. Last year, people came forward to coordinate four new attractions: a meditation garden, the yoga movement stage, a speak-your-piece soapbox, and a community art project. Giusti-Rose likens the latter to Burning Man in spirit.

And for this year, there’s another attraction to add to the list: the Green Business Arena, with prominent national and local green businesses that are involved in sustainable development, green economics, and social justice.

As showtime comes up for the festival this year, don’t expect Giusti-Rose to remain behind the scenes after all of that hard work. Sunday is her day off from organizing and facilitating, when she gets to observe and revel. “What I also do is I become a participant–I perform.”

As a dancer, Giusti-Rose has been able to reconnect with parts of her identity that she was forced to neglect in the days before she cut the umbilical cord. This year, she’ll perform a dance piece called Awakening of the Divine Feminine at the Goddess Temple.

“Sometimes I perform on the main stage with some of the performers–I danced with Taj Mahal last year. People see me with the cell phone and the clipboard and the headset, walking around like a robot. To see me totally let go of that and grow into spirit and creativity is a great demonstration of how we need to be holistic in our total lives, which is what Health and Harmony celebrates and amplifies.”