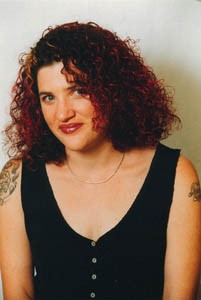 ‘Atlas of the Human Heart’ by Ariel Gore.

Mother of the Year: Ariel Gore’s new book narrates both her physical and emotional journeys.

For years Ariel Gore has counseled would-be’s, should-be’s and wannabe’s on everything from pregnancy and diaper debates to childcare and collection agents through her zine, Hip Mama, and her book The Hip Mama Survival Guide. An avatar of the practical, down-and-dirty mothering style that eschews designer strollers and embraces bringing the baby along to political demonstrations, Gore’s simple message is that there are no rules, and–more than anything else–what hip mamas need is to remember that, as she puts it, “we can only be who we are, after all, and we can give our children only what comes from our hearts.”

Now, Gore has released Atlas of the Human Heart (Seal Press; $14.95), a memoir that chronicles her journey from teenagedom to motherhood–and across Asia to Europe.

In previous writings, Portland-based Gore has revealed snippets of her earlier years, but in Atlas she reacquaints herself with that tumultuous time. Recalling her inspiration for the work, she says, “I’d just moved to Portland and got a residency teaching creative writing at Benson High School. Being around all those teenagers, reading their poems and stories, being on a high school campus–all that got me flashbacking to my own teen years, so I started writing a short story about being in high school. And after a couple of months, I realized I probably had a book on my hands.

“So that’s where we met, me now and my teenage me–we met at Benson High School in Portland.”

Gore refuses to categorize her book, saying that it is either fiction, “meaning it’s 76 percent true, or it’s a memoir, meaning it’s about 76 percent false.” But her story at its core is simple: a teenage girl seeking to escape the hell that is her adolescent life. She tries drugs, sleeps around, gets taken advantage of, and ends up pregnant.

The difference between this story of teenage angst and the many others that have come out recently is that Gore uses the world as her school and spans the globe searching for meaning everywhere–except at home in Palo Alto–to make sense of a time that was a cesspool of, as she puts it, “Money! Cocaine! Vanity! Marketing! Reagan! Sexual violence! Homelessness! AIDS!”

Gore’s prose is infused with her poetic, humorous voice. “In writing the story–and then the book–I tried very consciously to stay in my teenage voice,” she says. “It was important to me not to write a book ‘looking back’ on those years. I didn’t want to overlay an adult analysis or a feminist analysis or a maternal analysis on anything that had happened in those years. So that was the goal: To leave my present self out as much as possible.”

Atlas of the Human Heart begins simply enough at a place and time that we can all relate to: high school, a time of hormonal upheaval and angst, mixed with a bizarre sense of immortality. Here we find the 15-year-old Ariel Gore. Like many of her peers, Ariel is the product of ’60s hippie values, “raised with this sense of freedom and power and hope and love . . . with the idea that the world was my school.” She had a mentally ill and absent “bio-dad,” as she refers to him, and a mom with the uncommon child-rearing philosophy that children learn independence through neglect.

At home Gore is jerked around and dumped by her socially aware boyfriend, quietly raped without recourse, and unable to find time on her mother’s docket. Gore says that “one day I looked around at the world and I just wanted to run away. Everything seemed so shallow and messed up.

“I really had a little bit of a breakdown, and then I got it in my head that maybe there were places in the world not like that. Maybe I could travel to the places I saw in National Geographic and find some kind of a ‘home and youth of the soul’–someplace where I wouldn’t have to choose between remaining a child, which is impossible, and the only alternative I saw, which was psychic death.”

Here’s where the story veers off the familiar path. Instead of acting out at home or crashing a new BMW like many of her Bay Area peers, 15-year-old Gore’s disgust with life takes her to China–where she acts out internationally. It takes a certain inner resolve and fearlessness to leave the relative–if dystopic–comfort of American teenage life to travel abroad.

“There is fearlessness and then there is foolishness,” Gore says. “Having a well-developed sense of intuition–and the wherewithal to trust that intuition–is so important. But how do you develop intuition without getting into trouble?

“As a teenager, I just don’t think I cared that much about survival. Of course, the instinct to survive was there, but the wisdom that can border on paranoia didn’t come until much later.”

The world, Gore quickly discovers, is not the one she saw in National Geographic. In China she is warned from the beginning not to talk of politics, and yet when she persists, she finds that her actions could have devastating consequences for others and mean the loss of her own personal freedoms.

Gore moves on to a vibrantly hued and pungently scented Tibet where politics again touch her journey. She finds relief that she has missed a political massacre and notes, “This wasn’t my war.” In Katmandu, Gore befriends a young thief and explores her sexuality. When she runs out of money, she takes on some smuggling assignments that leave her stranded and penniless in Amsterdam.

Here she is mugged and becomes homeless until she falls in with a pot-smoking crowd squatting in an abandoned basement, and meets Lance, the man who will beat her, belittle her, and impregnate her. She prostitutes herself, living a downward spiral until she is placed in a hospital where she is “unable to give a clear account of her origin or destination.”

Gore’s story is centered on her efforts to escape the binds of Palo Alto, the United States, and teenagedom. She moves from place to place without making many conscious choices and ends up in a situation that binds her in one way or another to two human beings–her daughter and the daughter’s father–for the rest of her life.

When asked if she finds any irony in that, she responds, “For sure. Traveling, in the end, didn’t ‘free’ me in any traditional sense of that word. I don’t think I escaped any of the demons adolescence had in store for me. I could have done things more gracefully, maybe, but there are also some lessons you have to go to hell and back to learn.”

Those lessons are things that Gore has tried to pass on to her now 13-year-old daughter. “I think I learned to trust my intuition. And that’s something you can tell your children about, but unfortunately something they might have to learn for themselves. And I learned not to surrender my imagination to any school or government or dreary adult way of being.

“In some ways,” Gore adds, “that’s what adolescence is all about–the struggle not to surrender your imagination. . . . And in most people, the imagination gets buried for a time. The trick is not to let it get buried too deep.”

Gore exercises her imagination. Words as symbols, shelter, and refuge play a significant role in her journey, whether they are written on the body, a T-shirt, or in a book or journal. She seems to be piecing together the puzzle of self-expression, discovering writing as a right and a necessity.

“I wonder if I would have become a writer without those traveling years,” Gore ponders. “I might have, but I think that traveling, being alone a lot of the time, living in places where English was not the primary language, finding a kind of permanence in words and in poetry that I didn’t find anywhere else–all those things were so influential.

“As I was writing this book, there was a point where I became very conscious that I was writing a coming-of-age memoir about a writer–the story of how I got to be a writer.”