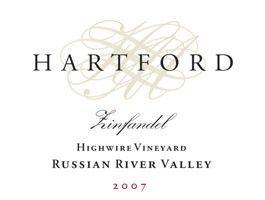 I’d say that Hartford was tucked away amid a little pocket of vineyard on a road less traveled if there was any way to tuck away this ambitiously sized facility. Hatched by a sparkling wine venture in the early ’90s, it was subsequently acquired by Jackson Family Wines. With Don and Jennifer Hartford at the helm, it is indeed part of the family: Jenny is the daughter of wine magnate Jess Jackson. Hartford’s role is to produce cool-climate, limited-release wines in the classic Sonoma-style Burgundian suite: Chardonnay, Pinot Noir and Russian River Valley Zinfandel. Perfect lawns, sunshine and the shade of sycamores reward the taster who opts out of the small tasting room bar. The patio is nominally reserved, but the genuinely hospitable hospitality staff will work it out if one calls ahead.

Bearing the “Hartford Court” label, the Chardonnays are pretty typical—which is to say, typically refined exemplars of this region. All the elements of barrel-fermented Chardonnay are here in elegant distillate. Butter and oak take a back seat to subtle toffee and toast notes in the 2007 Four Hearts Russian River Valley Chardonnay ($40), with Meyer lemon and caramel that goes on and on. Made “in the style that Jenny’s sister Laura likes,” the 2007 Laura’s RRV Chardonnay ($65) has the aroma of cake and subdued, balanced flavors. Richer reminiscences of butter cookies characterize the 2007 Seascape ($65) and 2008 Stone Côte ($60), which takes its cookies over a core of Asian pear.

Triple-sorting the grapes and then some assures the 2007 Land’s Edge Sonoma Coast Pinot Noir’s ($45) clean, dark plum aromas, while allspice, dried mushrooms and dark, indeterminate fruit saturate the 2007 Far Coast Pinot’s ($70) voluptuous, silky body. Old vine Zinfandel from the cool Fulton area is bottled under the “Hartford” label, including 2007 RRV Zinfandel ($35), packed with bright cherry and vanilla, and fine, chalky tannin that carries the flavors all the way to the finish. The more intense 2007 Highwire Zinfandel ($55) is imbued with spice, sage, marjoram and deep brambleberry flavors.

Up for release next week: Hartford’s Rosé of Pinot Noir. If it weren’t for the pale, rosewater hue, this rosé could be mistaken for Sauvignon Blanc, with its sharp-edged explosion of guava and assorted tropical fruits. It may be a road less traveled out to Hartford, but it sure makes all the difference.