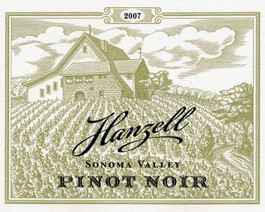 Time was that most California wines sported a label showing an idyllic sketch of the winery fronted by a parade of vine rows, frankly aping the staid labels of French chateaux. These days, wineries change it up every few years to catch the consumer’s eye with the latest trend in die-cut shapes, foil stamps and furry critters. So what does it mean when, sequestered high up in the manzanita-studded hills above Sonoma, a wall-to-wall wine library of bottles wear the very same label, representing five decades of vintages? For a grand dame like Hanzell, the last thing they want to do is change the scenery.

The funny thing is, this rustic little vignette was the site of post-prohibition California’s very cutting edge. A visit here is more than a winetasting; it’s a pilgrimage to a special place that’s since slipped somewhat under the radar, but continues to follow its founder’s goals to the letter. Ambassador James Zellerbach was charged with overseeing the Marshall Plan in Europe following WWII. Bewitched by Burgundy, Zellerbach set out to create even better wines.

He bought property in 1948 and built a two-thirds scale replica of a building in Clos de Vougeot. He hired top talent and ordered the latest in winemaking technology. The firsts here include: the first custom-built, temperature-controlled stainless steel wine tanks; the first use of inert gas to protect wine; among the first to use French oak barrels. Little tank No. 22 is the source of a cultured malolactic bacteria, now standard in commercial Chardonnay production.

While later adopters of these techniques went on to create wine empires, Hanzell stayed put, and has won the loyalty of customers as well as longtime staff; former winemaker Bob Sessions still holds the title “emeritus winemaker,” and wife Jean Arnold-Sessions is the company’s president. This kind of continuity is also carried over in the vineyard. The original 1953 planting contains the New World’s oldest surviving Pinot Noir vines, and subsequent vineyards are propagated from the “Hanzell clone.”

Hanzell wines are built for consistency and ageability. Pointing to a wine that bears the same vintage date as my own, current winemaker Michael McNeill says it’s still tasting fresh. Good news for me and the wine. The 2007 Sebella Chardonnay ($36) is a second label, intended for earlier consumption. It’s got a soft, cotton candy aroma with faint and elegant apple notes. Similarly subtle, the 2007 Estate Chardonnay ($70) exhibits hazelnut and golden apple skin aromas, with an uplifting cottony mouthfeel belying a focused core of acidity.

McNeill quips that when Chardonnay style w as lean and crisp in the ’80s, people said that Hanzell’s was big and opulent. When the style swung toward oaky butterballs, they were praised for leanness and restraint! Meanwhile he says that the 2007 Estate Pinot Noir ($95) is among the most tannic in the business. But with more of a dried fruit character than jam, overlaid with bay leaf and potpourri, it fills the palate with light astringency that doesn’t lay heavily on the palate. Like the estate from which it is born, it’s built to age gracefully.