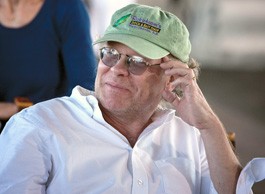 New things are in the works on the North Bay theater scene, from new leaders, to new venues, to new companies to new plays.

, Petaluma’s popular little red house on the hill, has a world premiere this fall with Eric Overmyer’s one-act drama Dracula (Nov. 5&–21). In a double feature that includes Gian Carlo Menotti’s one-act opera The Medium, Dracula puts a modern spin on the classic tale of a bloodsucker in love. Overmyer, the writer best known for HBO’s The Wire and Treme, has written the show specifically for Cinnabar. Beth Craven directs Dracula, while The Medium will be directed by Elly Lichenstein.

In Santa Rosa, Railroad Square’s just hired long-time North Bay arts professional (and opera singer) Michael Fontaine to serve as interim artistic director, following a brief turn in the same role by Matthew Kerns, brought in last May in the wake of artistic director Beth Craven’s sudden exit from the organization. As the search continues for a permanent AD, Sixth Street is readying its own notable world premiere.

Craven has obviously been keeping busy since leaving Sixth Street, working on the vampire play while simultaneously founding her own brand-new theater company. With plans to kick off its first full season in 2011, will focus on shows like the popular Hank Williams: Lost Highway, fusions of theater and music that will appeal to a wide audience. With ambitious plans for a show about Janis Joplin, Woody Guthrie and Southern sharecroppers (singing the folksongs of Si Kahn), Heritage will stage its shows at Cinnabar, the Spreckels Performing Arts Center and possibly even in San Francisco. To give local audiences something to hold on to while those shows are prepared, Craven is planning a three-day run of Hank Williams (Nov. 19&–21) at Spreckels.

Over in the thriving artist colony known as South A Street, the mighty is preparing to stage a new bilingual comedy, To the Actors (Sept. 23&–Oct. 9). Written in English and Spanish, the show follows a troupe of actors attempting to present their own show while dodging deportation raids, building inspectors and a whole mountain of comic—but undeniably real—obstacles.

In Mill Valley, the has several new and new-to-the-area shows in the works for this fall, starting with Tarell Alvin McCraney’s In the Red and Brown Water (Sept. 9&–Oct. 3).

Set in Louisiana, the play is the first of three loosely connected shows, all part of McCraney’s celebrated trilogy The Brother/Sister Plays. In a rare three-way alliance between Bay Area theater companies, SF’s Magic Theatre will concurrently run the second play in the series, The Brothers Size (Sept. 9&–Oct. 17), followed by ACT, producing the final piece of the trilogy, Marcus; or, The Secret of Sweet (Oct. 29&–Nov. 21).

Immediately after kicking off the trilogy, MTC will put up the world premiere of Bill Cain’s new play 9 Circles (Oct. 14&–Nov. 7), a “military thriller” in which a U.S. soldier, possibly guilty of war crimes, is put on trial, with the mystery about what really happened unfolding alongside the trial. Cain is the author of the hugely successful Equivocation, staged by MTC just a few months ago.

In San Rafael, the bold-as-lightning will once again take over unleased store-front space along Fourth Street, this time to stage Lynn Notage’s Intimate Apparel in its North Bay premiere. Intimate Apparel (run date TBA) follows Esther, a hard-working seamstress who designs outrageous undergarments for a bevy of New Yorkers, her clientele running the gamut from dowagers to prostitutes.

Also in Marin, the venerable Ross Valley Players earn the honors of being the first North Bay company to stage David Mamet’s new play, November (Sept.17&–Oct. 17). A sharp political comedy about U.S. elections, the story follows a vulnerable U.S. president placing his hopes for a second term on how he handles the annual pardon of a Thanksgiving turkey.

In Sebastopol, the premieres continue as the brings Neil LaBute’s comedy-drama Fat Pig to the stage. A moving and funny satire of American views on love and physical beauty, Fat Pig (Sept. 22&–Oct. 24) is a small-cast gem, the story of a young businessman and the large woman he falls in love with, upsetting the peer-pressure balance among his friends and co-workers.

The , which has been bouncing about in a number of venues over the last few years, will land this fall at Spreckels Performing Arts Center, where it plans to stage its entire 2011 season. But first, it’s off into battle with James McLure’s Pvt. Wars (Sept. 23&–26) at Temple Ner Shalom in Cotati. Then it’s down the rabbit hole with the world premiere of Alice (Nov. 12&–28). A new, dark and twisted adaptation of Alice in Wonderland, Alice was written by Tony Ginesi and Merlyn Q. Sell (Circus Acts, Project M), and looks to be decidedly not-for-children.

Sometimes the old is new, as is the case with Paula Vogel’s Oldest Profession (Sept. 3&–26) a music-heavy staging of the comedy, which will mark ‘s new permanent home at the Rio Nido Lodge. Pegasus has been rootless since losing its longtime house last year. This particular version of the comedy about hard-working, lovable, middle-aged (and older) ladies of the night, features classic burlesque tunes, considered scandalous in their day.