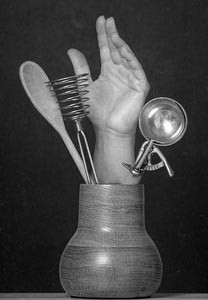 I RECENTLY discovered the most amazing kitchen tools. They never need sharpening. They’re perfectly weighted, easy to clean, and completely rust-resistant. They’re instantly adjustable to almost any kitchen task. And, best of all, I never have to worry about leaving them behind at a potluck.

Are you poring over the cooks’ catalogs yet? Well, you won’t find them there, but don’t worry. You probably already have a set: your hands.

Hands are the original kitchen implement. Heck, opposable thumbs–the very evolutionary development that enables us to hold steering wheels and cell phones–originally came about so we could get a better grip on our food. Why not use those puppies for good, not evil? Williams-Sonoma can only dream of coming up with something so ingenious. They can squeeze lemons, fold enchiladas, fish a pickle out of the jar. Hands let you sprinkle just the right amount of sugar, test a strand of spaghetti, throw raisins in the cookie batter; heck, you could even mix the cookie batter with your hands, if you felt like it. With your hands, you can pick bits of shell off an egg, press crumbs back onto the side of the cheesecake–or just whisk them away into your mouth. The question is not what can you do with your hands, it’s what can’t you do with them.

In cookbooks or cooking classes, or in the Saturday morning cooking shows, we’re not really taught to explore these options. There’s something about handling food too much, with the hands, that just makes modern-day Americans a little uncomfortable. The discomfort goes beyond perfectly valid, if slightly paranoid, concerns about hygiene into the area of taboo.

Every year there are more and more ways to handle food without touching it: bread mixers, food processors, salad spinners, 10 kinds of tongs. They say these innovations are to speed things up, to keep things neat, but I think it’s a convenient cover for not having to soil the hands with anything so mundane, so earthy.

BUT IT’S ONLY the home cooks who are so apprehensive. Chefs, for the most part, don’t have any compunctions about putting their hands all over your dinner plate. They know the truth: in order for food to be cooked and arranged properly, touching it is essential.

But all too often, home cooks pick up their food as though they’re picking up a dead mouse: with their fingertips, pinkies extended. A few of my acquaintances have commented on my speed in prepping ingredients, but that’s just a side effect of using my whole hand to get firm with the food, to hold it down and scoop it up, glop and all.

I’m beginning to appreciate some other reasons for getting back to the hands-on approach. Ripping lettuce by hand, for example, gives the fingers a chance to find those soft broken spots that, under the uncaring knife, might end up in the salad bowl. Warming tortillas or chapatis over an open flame is too tricky for a slow pair of tongs; the fingers, on the other hand, move much more deftly, and immediately sense when the bread has reached the correct flexibility (and temperature–ouch, hot, hot!). Working bread dough by hand possesses its own subset of particular pleasures: the cool, soft flour; the soft give of the unbaked loaves as you gently place them on the baking stone; even the flour crust around the fingernails, perhaps giving you an earthy thrill.

Best of all is that sweet spot, after about eight sweaty minutes of kneading, when the dough transforms from sloppy to satiny smooth. That’s a beautiful thing.

It’s funny that I’m only now discovering the culinary potential of my hands. When I was younger, I knew these things instinctively. My favorite hands-on task, beyond pounding the occasional bowl of bread dough, was the annual turkey massage. Though my mother was no kind of culinary genius, she taught us (unwittingly à la Julia Child) to rub the Thanksgiving turkey with butter, inside and out, before putting it in the roasting bag. Now I understand the science behind the procedure, that a sheen of butter browns the skin and crisps it up nicely, while the gravy gets an added richness.

But back then I figured it was just a weird little family tradition.

It was a simple ritual, but it felt huge: the fate of the feast rested heavily on our youthful shoulders. First we lugged the thawed turkey from the cold garage and unwrapped it in half of the double sink. Pretending to be surgeons, we pulled the neck and the mysterious bags of giblets out, then ran water through the carcass and toweled it off carefully, patting the bird dry under the “armpits.” We had to stand on a step stool to get leverage, but with a mighty collective effort, we could pick it up and make it dance along the sink rim, flapping its featherless wings. After getting over the giggles that performance inevitably inspired, we laid the turkey down in the pan and began the massage, rubbing cold chunks of butter over the pale, goose-pimpled flesh, until the butter softened and spread in slick golden patches.

CONSIDERING THE STATE of our magnificently greasy hands, that we never actually dropped the turkey on the floor was some kind of minor miracle. But the list of our health-code violations was plenty long even without that. We stuck our unwashed fingers in the cooling cranberry sauce. In between, we petted the cat, pulled each other’s hair, and played Monopoly (you know what they say about money and germs).

We dribbled raw turkey juice over the countertops and onto the floor, where our youngest siblings were crawling happily.

Those were the blissful days before anybody really paid attention to salmonella (which was not rampant then) and other digestive disorders; everyone was oblivious, most of all a pack of enthusiastic kids wrestling with a 25-pound bird. But no one ever got sick.

And everyone always loved the turkey.