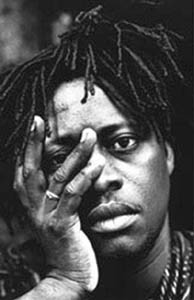 Audio Folklore: Guitarist Habib Koité has music in his blood.

All roads lead to Mali, at least for blues hounds seeking the source of the Mississippi Delta’s sanctified sounds. Corey Harris, Taj Mahal and a host of other U.S. bluesmen have traveled to that West African nation in search of their roots. North Bay world-music fans need travel no further than the Sebastopol Community Center this week for a taste of authentic Malian music when guitarist Habib Koité and his Bamada band make a much-anticipated North Bay debut.

With just four albums in eight years to his credit–including the recently released two-CD live set Foly! Live around the World, featuring 18 ebullient tracks recorded at concerts across the globe–singer, guitarist, songwriter and bandleader Koité has won a worldwide audience with a mesmerizing sound driven by his own bluesy acoustic-guitar work, intimate singing style and tribal beats, all cloaked in a warm gentleness and bolstered by the genius of balafon (a kind of xylophone) master Keletigui Diabate.

“There’s no rush to glitter and spark, no rabble-rousing short cuts,” music critic Rick Sanders recently noted in a review of Foly! in the British folk-music magazine fRoots. “The sound is organic and though amplified, still pretty much the product of wood, skin and string. The arrangements are complex and highly worked, but so honed that it all sounds quite effortless.”

This music is in Koité’s blood–literally. Born to a noble line of Khassonke griots, or folklorists, the 47-year-old Koité learned to play guitar while accompanying his mother’s singing. And he listened closely as his paternal grandfather played the kamala n’goni, a traditional Malian four-stringed instrument common to hunters in the nation’s Wassoulou region. “Nobody really taught me to sing or play the guitar,” he has noted. “I watched my parents, and it washed off on me.”

Originally intent on a career in engineering, Koité in 1978 enrolled, at the urging of an uncle, at the National Institute of the Arts in Bamako, Mali. During his four-year tenure there, and later as a guitar instructor at the school, Koité met such celebrated local artists as Keletigui Diabate and master of the kora harp Toumani Diabate (no relation). In 1991, he appeared on Toumani Diabate’s Shake the Whole World album.

Three years earlier, in 1988, Koité had formed his own band, Bamada, a slang word that roughly translates as “in the mouth of a crocodile.” French audiences were the first to embrace Koité’s infectious rhythms. With cash earnings from his first prize at 1991’s Voxpole Festival in Perpignan, France, Koité began financing his own recordings.

In 1995 he released his debut CD, Muso Ko. In 1999 the Putumayo label released his follow-up CD, Ma Ya, and 2001’s Baro. Those albums drew critical acclaim and brought coverage in such high-profile U.S. publications as Rolling Stone and the New York Times, as well as a spot on the House of Blues Radio Hour “Mali to Memphis” radio special and CNN’s World Beat program.

By and large, Koité is a purist who steadfastly refuses to blend the various styles of regional music that he plays. As he has said, “I don’t play any strange notes.” Instead, he embraces the griot tradition by preserving and spreading the culture of the old Manding Empire of West Africa to a wider world receptive to his gentle musical missives.

“We don’t have certain things [in our culture], like technology,” Koité writes in the liner notes to Foly! “But there are things that we are the only ones to have. If we lose them, they will be lost not only for us but for the whole world.”

One from the Heart (Columbia/Sony/Legacy)

After the darkness, with its attendant personal tragedies, of his 1979 war film Apocalypse Now, filmmaker Francis Coppola set out to make a love story, albeit a bittersweet one. The result was 1982’s critically panned One from the Heart, newly restored for limited theatrical and DVD release. The jazzy soundtrack, just reissued with two bonus tracks, features the unlikely pairing of that world-weary bohemian Tom Waits with Crystal Gayle, one of the most popular country-crossover singers of the ’70s and early ’80s, singing heartfelt Waits compositions that rank among his most accessible and best. Gayle’s unaffected style makes her the perfect foil for Waits’ whiskey-soaked gruffness. Some of these tracks, such as the melancholy “Broken Bicycles” and the ode to shattered dreams “Little Boy Blue,” are classic Waits with a straight-ahead finger-snappin’ delivery that is cafe jazz at its finest. –G.C.