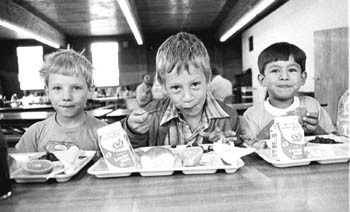 Children of the Korn™?: How will America’s youth strive and grow without access to Champagne™ and Mozarella™? Ms. Bir thinks she knows how.

If the EU gets its way, you could be sprinkling Parm!™ over your spaghetti. And that might not be a bad thing.

Dumb old Europe. Those persnickety snobs are always trying to spoil our good American fun. If they’re not condemning the wars we pick with helpless countries or demanding that we stop exporting our genetically modified space-age grains and produce to their markets, they’re telling us what names we can and can’t use for our food. It’s appalling! Where did they learn their manners?

Grab a bologna and Swiss sandwich while you still can. You’ll need the fuel when you see what we’re up against–an emotionally exhausting mess that will doubtlessly provoke an appetite, though if our country acts quickly and implements some good ol’ American ingenuity, we can position ourselves to rise up, refreshed and invigorated, stronger than ever.

At last September’s ill-fated World Trade Organization summit in Cancun, the international media became swept up in a bloated hoo-hah regarding 21 developing countries’ objections to $300 billion in agricultural subsidies provided to European and American farmers by their governments. Plunging tariffs on manufactured goods and the resulting effects on the American economy were also erroneously dwelt upon.

Though you may sense that the aforementioned dilemmas are of severe global impact, they are, in reality, mere child’s play. The real issue at hand–the one the media utterly failed to report on–is a dark scheme that threatens the very warp of our country’s weave. For, while in Cancun, the European Union trotted out a list of 41 well-known food and drink names that they felt deserve worldwide name-brand protection–names such as Champagne, Roquefort, Chianti and Manchego.

Those 41 names are just the tip of the iceberg lettuce; Thailand is showing interest in brand-protecting jasmine rice, as is India with its Darjeeling tea. But this is just setting the first diabolical domino into action. Imagine if we eventually surrendered rights to precious names like frankfurters (of Frankfurt), pilsner (of Pilsen) and Milanos (of Pepperidge Farm)? How could we possibly continue to function in our present– and tasty–consumer mode without access to the word “cheddar”?

This brings up a cornucopia of stimulating intellectual issues, to wit: Where do names come from–locations, ideas or trademark offices? And to whom do names belong, especially when considering immigrants from the Old World who fled, penniless and crushed in spirit, to the New World with naught but the monikers of their treasured indigenous foodstuffs to comfort them?

Inevitably, the answer is that the time has come for us to move on. We simply cannot stand for this wanton EU name guarding! My good citizens, I propose that we beat those high-strung Euros to the punch and voluntarily alter the names of our own American-made, European-style foods.

Indeed, this radical but thrilling proposal offers benefits aplenty beyond resolving the primary branding/authenticating issue. Today’s younger Americans are ready for something new. And as proven by the name-giving geniuses of the snack-food industry, they happily respond to snazzily named brands with greenbacks and ATM cards in hand. Your own preciously pierced teenage son or daughter needs crunchy refreshment that he or she can identify with, not the stodgy, tired snacks of yore. So as the United States plunges headfirst into the promise of the 21st century, here are a few new and improved names that we can tote along with us:

Imagine, if you can, the marketing possibilities of cutting-edge flavors such as “Blastin’™ Herb™ Parm!™” or “Extreme™ Cheezin’™ Parm!™ ‘n’ Shreddin’™ Chedd’r™.”

And while it is true that the elimination of terms protected under the EU’s silly umbrella might put a kink in the otherwise brilliant slogan “Feta? You bet-a!” such actions should ideally spark our creativity. In order to preserve the longstanding tradition of the labels that grace those green and red foil canisters of processed Parmesan® and Romano® cheeses, we must sacrifice them. It is time to move ahead.

Additionally, there’s no better way to stimulate the economy and create new jobs than by pumping money into grandiose campaigns for marketing these 100 percent American-made brand names to the grateful young people who make up the future of our nation. By giving the powerful conglomerations that produce our Chedd’r™-based snack foods massive tax cuts, they can smoothly shorten the path to getting our economy back on its feet. Given the ravenous appetite of America’s growing youth, we’ll recoup our initial investment tenfold in just a few short years, all while advancing the face of the global economy by reassuming our rightful position as leaders, not cooperators.

This European-bred selfishness of name should also serve as a warning to our own nation’s generosity. We must, to preserve the integrity of our own domestic foodstuffs, fight fire with fire. Philadelphia Cream Cheese™, Old El Paso™, Rice-a-Roni™ (the San Francisco treat®!), Charleston Chews™, Boston Market™, California Pizza Kitchen™, Old Milwaukee™ –these are names we’ve known and loved for decades, names we have grown to associate with superior quality, shared family values and prime-time television.

And while the gaggle presented here are all happily protected by trademark, there exist hundreds of other beloved terms whose vulnerability we must tend to as soon as possible, before the ravenous vindication of the EU comes full circle and threatens their very identity: Cincinnati chili, Coney Island hot dogs, Buffalo wings, Manhattan clam chowder, Boston cream pie, New York cheesecake . . . The list goes on and on.

If we do not act with the appropriate speed, how long before bogus, Euro-made American cheese-food floods the markets of France? Those Gallic fops, long of proboscis and stinky of unchanged beret, have carefully invested years in the denouncement of American dairy products, all with the underlying goal of one day usurping our processed cheese food and claiming it as their own!

No! In fact, the key to our beating the EU at its own game is to extend beyond the borders they outlined in their name-grabbing proposal. With so many fine towns in California alone, why not develop lines of products claiming these illustrious locales as their origins (and, therefore, protected verbiage)? Yreka Premium Low-Carb Snack Bars, Petaluma Frozen Chicken Nuggets, Riverside Pork Rinds and Coalinga Pepperoni Hot Pockets could be just the beginning.

Because brand names are assimilated into our everyday lexicon, we shall have to enter upon a grand scheme of reeducation to expel the old, sickeningly European terms from our speech. Happily, our public schools across the country are underperforming. What better reason, then, to institute major reform? Can we not kill multiple birds with one stone with this opportunity and build anew not only language curriculum, but also the overly liberal sex education?

Our swift action as a nation is required to successfully overcome the EU’s well-veiled threat to national security, but it is only realistic to begin on a smaller scale. That is why California must rightfully assume its role as a leader through the introduction of the Schwarzenegger-Bir Act, which I have revealed to both our honorable new governor and selected executives (in confidentiality, of course) of Nestle’s American outposts.

The S-B Act, as it will hitherto be known, contains schematics for a great renaming of things, the scope of which can only be referred to as biblical in proportion. But the eventual imposition of the coming new order needs the power of the people–a village of villages–which is why I ask you, good American, to enlist your support at www.wemustcrushtheeu/parmesan/s-bact.com.

The future of dinner, good patriot, begins with you.