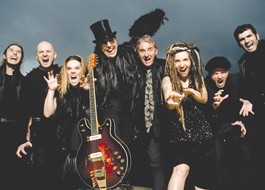 Os Mutantes change the game at Outside Lands

About half way down the 68-act list of artists slated to rock Golden Gate Park at this weekend’s Outside Lands Music & Arts Festival, there’s a name that sticks out like a sore thumb. It’s not Pearl Jam, MIA or even recent Beastie Boys replacements Tenacious D, but rather a band as influential as it is obscure, and one that, for fans of psychedelic rock, is a monolith of the genre’s proud history. That name is Os Mutantes. And after reuniting and recording the group’s first new album in 35 years, the crew will bring its signature Tropicália sound to the festival’s Sutro Stage this Saturday. The troop’s lead guitarist and only remaining original member, Sérgio Dias, gave the goods on the band’s latest mutations by phone from his home in São Paulo.

“I’m the same kid I was back in the ’60s,” says Dias with a lilting Portuguese accent. “Really, it was the kids who got us to come back out. The music we are doing now, I think, is the music that Os Mutantes would naturally be doing in the 21st century.”

Brazil in the 1960s was a country locked in the throes of a social and political revolution. At the time, the band was a well-groomed, wholesome-looking trio made up of Dias on guitar, his brother Arnoldo Baptista on bass and keys, and doe-eyed starlet Rita Lee on vocals. The Tropicália movement sprang up around the same time, and was, by most accounts, a dada-style mishmash of music ranging from samba and funk to folk and acid rock.

Since then, Os Mutantes have been cited by bands like Beck, Nirvana and the Talking Heads as being one of the most influential groups in pop music. Beck’s 1998 album Mutations was a tribute to the band and was made famous by the hit single “Tropicalia.” Yet the Mutants of 2009 are a far cry from the 1960s and ’70s version. The lineup, having gone through 11 band-member additions and deletions over the years, is still anchored by Dias, but now features longtime Mutante Dinho Leme on drums, plus five recently added musicians on vocals, keys, bass and guitar. The group’s new album, Haih or Amortecedor, due out Sept. 8, is a departure from the lush Samba-psyche-pop of yesteryear and a step toward a more progressive rock sound, but one where the iconic Tropicália style still shines through.

“Mutantes is not about me or the band; it’s an umbrella term for a state of mind,” says Dias. “The music speaks for itself. And when you see us live, there won’t be any special lights or pyrotechnics, it’ll just be us smiling onstage and getting lost in the music.”

Os Mutantes rock the Sutra Stage at the Outside Lands Music & Arts Festival in Golden Gate Park, San Francisco, on Saturday, Aug. 29, at 4:50pm. The three-day festival runs Aug. 28&–30 and also features performances from Pearl Jam, the Dave Matthews Band, Ween, Modest Mouse and the Mars Volta, along with 62 other acts on seven stages. Single day tickets are $89.50 and three-day passes are $225.50. Check www.sfoutsidelands.com for more details.