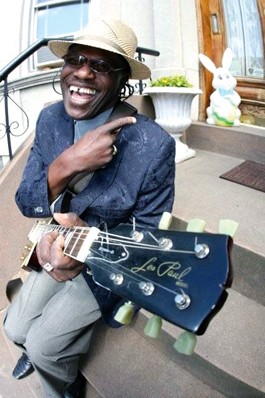 Petaluma jazz and blues fest is bigger and, yes, better than ever

The magic formula for holding a successful fundraiser, it seems, is to simply give the attendees an abundance of what they like. If said fundraiser happens to be in Sonoma County, then the formula gets even easier: lots of wine and damn good music.

At least, this is what works for the Petaluma Wine, Jazz & Blues Festival, and they’re not about to change a thing. After a hugely successful debut in 2008, the festival is returning with a lineup straight from jazz and blues heaven: big-wig Charlie Musselwhite, Joe Louis Walker (above), the Peter Welker Sextet and Booker T. are just a few to look for. More than 80 wineries will be attending, pouring their little vintner hearts out in the form of over 200 wines for a good cause.

The festival, which will take place at the new Sonoma-Marin Fairgrounds this time around, is a benefit for music-education programs in all Petaluma-area schools.

It’s hard to say what could be better than lounging around on a grassy slope on a lazy, late summer day with a bottomless wine glass and seven hours of high-end musical entertainment. Oh, that’s right—the Lagunitas Brewing Company will also be on site, as will a variety of specialty food vendors. One more thing: a music artist’s booth for meet-and-greets, autographs and all the merch a hepcat could dream of.