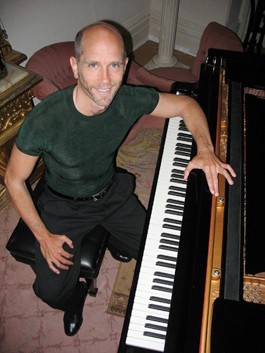 Going to the Chapel

Flyers depicting a slender, sensitive-looking man in leather seated at a grand piano began popping up all over Guerneville last summer. A leather daddy playing Liszt? This was intriguing.

Soon the musically knowledgeable were reporting that the guy with his naked chest poking out between the flaps of a leather vest was a hell of a pianist. Turns out he had taken up residence in the former Guerneville mortuary, brought in a handful of pianos and was offering concerts practically every day of the week. He needed to rehearse anyway, he said, so he might as well make public performances out of his practices.

At the same time, another award-winning concert pianist was moving to Guerneville with her husband and children—go figure the odds in a town of about 2,000 people—and mutual friends decided the two should meet.

It was musical kismet. Seth Montfort, a pianist who founded the San Francisco Concerto Orchestra, and Haley Yount Severe, a vocalist and pianist who left her longtime Mill Valley music studio for greener hilltops, decided to join forces and create the Russian River Performing Arts Center.

The timing was perfect. Montfort had just lost a roommate, because the roommate’s toy dachshunds barked incessantly when he played. The building on Mill and Fourth streets was too big for a single renter but just large enough, with its main room and side offices, for a modest music conservatory.

It might seem like a pie-in-the-sky idea in a town as small as Guerneville. How can you fill 40 seats often enough to pay the rent?  But consider that the lower Russian River communities already support a year-round theater company, a nightly jazz club, a movie theater and several art galleries, and it seemed potentially doable.

The two pianists are a force to be reckoned with. Severe, who says she really gets going when people tell her something is impossible, and Montfort, more reserved by nature but equally determined, are pulling it off.

It didn’t hurt that Montfort has top-notch musician friends in the San Francisco Concerto Orchestra, an organization he founded 10 years ago so professional musicians could have the starring roles often denied them in their regular symphony jobs. In the early months, those players showed up regularly to perform, 20 or 30 of them, with their instruments, often squeezing into the tiny former embalming room and memorial chapel.

John Moran, performing and literary arts manager for the Sonoma County Arts Council, dubbed these endeavors “the Mortuary Orchestra.” Montfort and Severe are still deciding if they want to make the name official.

What Severe brings to the mix, other than her expertise at the keyboard, is years of teaching piano and voice to both children and adults, a background in theater, television and radio, and a way of relating to people that makes them want to keep coming back for more.

While they both started their careers as child prodigies, Severe and Montfort are otherwise a study in contrasts. Short of five feet tall and 100 pounds, Severe has been married for 26 years to the man she fell in love with on her first day of college. Severe’s musical background includes a childhood spent in the Southern Baptist Church in Oklahoma City and piano lessons beginning at age five. By age 12, she was the youngest student at the Oklahoma City University Performing Arts Conservatory, where she studied Italian, French, German, opera, musical comedy and classical piano, and played the bassoon in the university orchestra. She toured the country, representing the university in vocal competitions, and was named female vocalist of the year by the National Association of Teachers of Singing in 1978, earning a full university scholarship.

While she was still living in Oklahoma, Columbia Records invited her to Los Angeles to audition for Star Search. She didn’t make the cut because she sang the wrong kind of song—it was evidently country and Western year—but it brought the Severes to California, where they have lived happily ever after.

With their children finishing college and going out on their own, Haley and her husband decided to leave now-urbanized Mill Valley for Wild West Sonoma County, landed in Guerneville and began this new chapter of their life.

Montfort, the self-appointed foreign ambassador of the pair, spent the last half of March and early April fulfilling a lifelong dream of playing Latin American&–inspired music in Latin America. He had booked himself on a musical “Temple and Jungle” tour of Mexico, beginning with a concert at the Hotel Villa Maria in Merida, next door to a famous Aztec pyramid.

Montfort says he has always been drawn to the jungle and music that comes from the jungle, whether traditional or composed.

“When I was a child,” he says, “I wanted to be a naturalist. I grew orchids in my room and the paint peeled off the walls.”

Now, he frequently performs pieces by Heitor Villa-Lobos, Brazil’s most renowned composer, and writes his own music, inspired by the ancient sounds of the Latin American jungles. Originally from Colorado, he grew up in a musical family. Both his grandmothers played piano in silent-movie houses, and his brother Matthew heads the highly successful world-fusion band Ancient Future.

Seth Montfort began playing the piano on his own as a child and was quickly drawn into the world of music competition without much formal training.

“I got my training by being onstage, and by being onstage with mean people [who considered him an upstart],” he says. “I actually didn’t play very well for the first 10 years.”

After he moved to San Francisco, he stopped performing for seven years to compose his own music, then reinvented himself as the head of the San Francisco Concerto Orchestra, which not only performs regularly, but also sponsors competitions that have served as a springboard for numerous new musicians. At the Russian River Performing Arts Center, one of his personal goals is to create an exchange program for Mexican and American music students. He believes the two musical cultures have a great deal to share with each other.

Montfort explains that the leather outfit he wears when he plays Liszt is really just a costume. “I don’t have just one personality when I play, but I try to be what the music is,” he says. “When I heard Liszt concerts, they always sounded like leather to me, so I started playing them in leather.”

But, even though Montfort’s leather is more showmanship than lifestyle, it is also an expression of the center’s pervading attitude that you can be a serious musician without taking yourself seriously. It’s a fun place to be. There is a friendly give and take between performers and audience that is rare, especially at a classical music event.

For example, last autumn, following a symphony performance of Saint-Saëns’ “Carnival of the Animals,” the audience sent up bravos after the finale. The playing had been passionate and sprightly, and the accompanying verse by Ogden Nash was a hoot. So the orchestra leader asked, “Do you want us to play the finale again?” When the audience shouted yes, the pianist, a wild woman from Philadelphia who played like a virtuoso in heat, proclaimed, “Only if you dance to it!”

There was no dancing, but there was a second finale and smiles all around.

The center’s combination of concert offerings is as unconventional as the ambiance: folk, worldbeat, jazz standards, piano solos, a weekly “healing with music” session, an open mic, an African percussionist playing duets with a classical violinist—you name it, or suggest it. The Friday night concerts are broadcast live from the center over Guerneville’s low power station, KGGV-FM.

There is also the conservatory aspect of the center, primarily Severe’s piano and vocal training, which she says is her favorite part.

“I want to have students imagine what they can do with their gifts,” she says.

She carries musical expression as a regular part of life philosophy into all her teaching, working with students in whatever way they need to be successful. Recently, one of her teenage students was so nervous about what was going on in her personal life that she couldn’t sing. Then the student burped, and Severe countered her with a big loud one of her own. It quickly turned into a belching contest and, within minutes, the two were rolling on the floor, belching, laughing and crying.

After that, the young woman was able to sing her song.

Bohemian.com
Previous articleSo Ya Wanna Be a Derby Girl?
Next articleBikini Kill in Santa Rosa, 1993