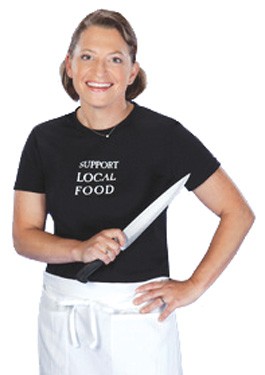 Duskie Estes is sworn to secrecy. The details of the season three premiere of The Next Iron Chef are so closely guarded that the Bohemian’s phone conversation with the Zazu and Bovolo chef and co-owner was actually monitored by a Food Network minder. But locals who know Duskie—who also co-owns Black Pig Meat Co., all with husband John Stewart—might catch her drift about the show’s secret ingredient: “It’s . . . an item that’s very near and dear to me,” she says carefully.

During her pre-show interview, Estes was asked what one ingredient she’d absolutely want to have on a desert island. Then, they turned it on her as a surprise ingredient. “Sure, it’s near and dear to me,” she laughs, “but not what you would choose to cook in under an hour! I was thinking on a desert island, I would have all day!” The results, she says, prove amusing.

Alton Brown hosts the competitive cooking show in which chefs vie for the title in a gadget-filled kitchen. In the midst of the madness, Estes tried to put in a plug for our local wine and produce every chance she got. To find out whether the Slow Food advocate from wine country makes it to the fast-paced final showdown in Kitchen Stadium, we’ll just have to tune in. Meanwhile, back at Zazu Restaurant + Farm, Estes can only allow that she has a fighting chance. “Did you know that I’m a really competitive person?” she asks sweetly.