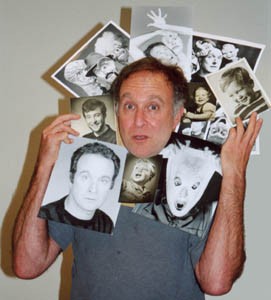 Fred Curchack has been crying. Don’t expect him to stop anytime soon. The acclaimed Texas performance artist (Lear’s Shadow, Live Love Acts) has been rehearsing around the clock, readying his latest performance piece for its world premiere this weekend. According to custom, Curchack will be unveiling the fledgling show at Petaluma’s Cinnabar Theater, his West Coast home-away-from-home.

The preparation has been unusually emotional. Titled Glimpsings: A Portrait of the Artist as a Young Nincompoop, the revealing one-man show is the 53-year-old Curchack’s first attempt at unfictionalized autobiography–with none of the puppetry or elaborate masks that are his trademark. And the process of coaxing his own outrageous life stories from the recesses of his psyche and out onto the stage has proved more than a little overwhelming.

“As soon as you start remembering things,” Curchack explains, taking a rehearsal break to chat on the phone, “an enormous cascade of memory is unleashed. I’m so in the habit of churning up memories now, I can’t seem to stop it. I can’t imagine how I’m packing this many stories into an 80-minute show! I just decided to add one this morning.”

Just one? Throughout this 30-minute break, Curchack interrupts himself at least half a dozen times, breaking off in the midst of some anecdote or recollection to say, “I’d forgotten that. That’s good. I’d better weave that in somehow.”

Glimpsings was inspired by a suggestion from Curchack’s son, Adam, 25, that his father take all the “incredible stories” he tells and craft them into a show, a notion that was initially met with reluctance. “Everybody believes their own life is incredible and very interesting,” Curchack says, “while it might actually be incredibly boring.

“Not that I suspect,” he adds, “that my own life has been boring.”

In truth, it’s been anything but. By his own admission, Fred Curchack’s life–what he calls, “the seeming chaos of my personal experience”–has been packed full of close shaves with killers, whores, cougars, demons, gurus, girlfriends, and gods. “Plus a number of life-and-death encounters,” he says, “some of which end in actual death.”

“It’s really very funny,” Curchack reveals. “I cry with laughter while I’m rehearsing this–but I also just cry. The show contains some excruciating memories that are crucial to the puzzle.”

The funny parts include one bit about the inventive way Curchack avoided the Vietnam War draft (he sat at the desk of the Army psychologist, reading aloud from The Tibetan Book of the Dead), while one of the tougher recollections takes him back to the suicide of a girlfriend when he was just 17.

“It’s been a profound learning experience,” he admits. “But that’s why I’m doing it. That’s why I make art. Art is a sublime attempt to understand what it is we experience in life.”

A key part of Curchack’s personal philosophy is that all of us, not just the artists and performers of the world, can use the artistic process to draw meaning from our own tears and laughter.