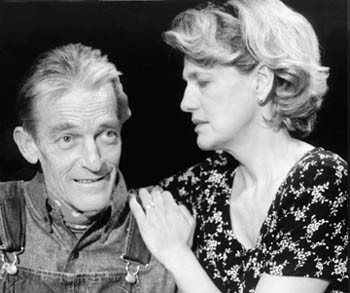 THE HUNGER for power carries with it a distinct odor of insanity. No one in his right mind wants to take the tiller of the ship of state; the people motivated to assume a position of such grandeur are customarily delusional. And as a character in Glamour observes, “That is the irritating thing about crazy people: you can’t blame them for anything.”

Perhaps not, but Glamour, which premiered last week at the Cinnabar Theater in Petaluma, demonstrates impressively just how dangerous it can be to consort with powerful people.

Writer and director John O’Keefe, now in a two-year residency with Cinnabar, describes his play as “a taut, nasty little drama of quite large dimension.” Using historical events as a springboard, O’Keefe has fashioned a dark, sometimes amusing story of conflicting relationships as a metaphor for the rise of fascism and the invasion of Europe that began World War II.

In the summer of 1939, the poet and novelist Robert Graves and his companion, the poet Laura Riding, were obliged to flee their home in Spain when Francisco Franco came to power. They landed in America as guests at the farmstead home of Kit and Schuyler Jackson. Schuyler, a writer for Time magazine, had favorably reviewed some of Riding’s poetry, and he invited her and Graves to stay. Before the summer was over, Riding had seduced Schuyler and driven his mentally unstable wife, Kit, into an insane asylum.

Graves, who is best known today for I Claudius, a fictional autobiography of the Roman emperor that was serialized for television by the BBC, was already famous when he arrived in America. Riding, an intensely charismatic woman who inspired cultlike devotion among her friends, was not; she resented Graves’ success as a writer, yet was drawn to him. Graves in turn worshipped her and considered her the superior writer, although he was also aware of her self-centered, predatory nature.

The charged, ambivalent relationship between Graves and Riding is juxtaposed in the play with the drab marriage of Schuyler and Kit , who are practically American Gothic by comparison. Both couples are deeply wounded, but the Jacksons seem wary and exhausted where their European counterparts are melodramatic.

Schuyler, played by Chris Murphy, is an unsuccessful farmer (he plants soybeans 30 years too soon) and an underwhelming writer (Graves labels his attempts at poetry “volcanic”) who hungers for acceptance. Riding perceives this and toys with him, alternating insult and encouragement.

Elly Lichenstein plays Riding as a hyperverbal harridan of the Glenn Close school, gasping for breath as she rattles through her speeches. Language is her weapon, which she uses to belittle and beguile the others as it suits her needs. “All soldiers are war criminals,” she proclaims at one point in a dig at Graves, who served in World War I. Later, in a middle-of-the-night frenzy, she intimidates Kit into removing all the tableware from the house because it is aesthetically unpleasing.

The character of Riding is obviously meant to parallel the fascist dictators of her time– as when she discusses plans to create a new dictionary with only one definition for each word. But it is a credit to Lichenstein and O’Keefe that her megalomania never seems contrived. Although Riding is a repugnant figure, she is also fascinatingly human. “I have known fear, fear of my own mind,” she says. “And I have conquered it.”

LUCAS MCCLURE, playing Graves, seems almost wooden at first. But as the truth about his character is revealed over the course of the play, the emotional distance makes more and more sense. Graves’ deference to Riding prompts Schuyler to sneer: “He wipes the crumbs from her mouth. He’s her napkin.” Of course, Schuyler wants to be her napkin, too.

In his quiet way, Graves is also a charismatic figure, but he is also shellshocked and tormented by horrific memories of life in the trenches of the Great War. His façade cracks during a riveting, stomach-turning speech to Kit that is perhaps more vivid in its description of rats and corpses than strictly necessary.

While everyone on stage is clearly a pro, Laura Jorgensen gives an outstanding performance, vanishing seamlessly into her role. As Kit, her face takes on a haggard, subtly disturbed appearance, as if she is beset by forces of evil she cannot identify. Her tragic victimization at the hands of her husband and Riding is at the center of the play, and Jorgensen imbues her final moments of defeat with an awesome clarity.

The show on opening night was nearly flawless, aside from a few minor verbal stumbles and one lighting miscue that had a crew member quickly scuttling offstage as a scene began. Where it counted, all four actors came through with performances of emotional resonance and depth. Glamour leavens its dark themes with just the right amount of humor, and the effect can only be called a success.