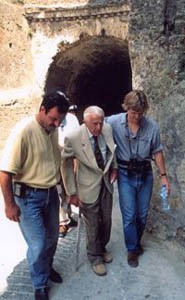 THE LATE Paul Bowles was a certified 20th-century legend, a label he earned in part through the harsh and enduring beauty of his writing, especially his 1949 novel The Sheltering Sky. Bowles was also famous, of course, for the beatnik-inspiring radicalism of his lifestyle as an expatriate American in Morocco.

But the writing and the lifestyle sometimes obscure the third area into which Bowles’ poured his creativity. Long before Bowles pulled up geographic and spiritual stakes, moving from New York to Tangier in the late 1940s, he had enjoyed a full and rich career as a Manhattan composer. Trained by Aaron Copland, Bowles the composer worked with the cream of the New York crop, including Orson Welles, Tennessee Williams, Leonard Bernstein, and Merce Cunningham.

Then, on a trip abroad in 1947, Bowles discovered Morocco, and his life changed overnight. He never went back to the states. When Bowles abandoned America, he also abandoned composing, focusing instead on the writing that would eventually eclipse the public’s recollection of his one-time musical successes.

His music, if not entirely forgotten, became a mere footnote to his legend.

Now that footnote has now become a film.

Night Waltz: The Music of Paul Bowles is San Francisco filmmaker Owsley Brown’s award-winning homage to Bowles’ unsung mastery of eclectic musical composition. This uneven but eye-opening documentary alternates between up-close interviews with Bowles (shot in Tangier shortly before his death at age 88 in 1999) and “visual essays” set to seven of Bowles best compositions.

These passages place Bowles’ meditative, frequently joyous musical pieces against the famous short films of filmmaker Rudy Burckhardt (who also acted as Night Waltz‘s cinematographer) and Nathaniel Dorsky (who served as editor). The sequences are dominated by shots of New York of the 1940s: business people scurrying to and fro, neon lights towering over the skyline, little boys skinny-dipping beneath the Brooklyn Bridge.

While the music is the heart of the film, the interviews with Bowles are its head. Bundled-up and scarfed, propped up in bed or sipping tea at his table, Bowles analyzes his life and music and tells wonderful stories. Clearly delighted that his music is beginning to receive attention again, he talks about the time Orson Welles and John Houseman stiffed him, and the time he stiffed Sergei Prokofiev.

Eccentric and irascible, Bowles appears alternately charming and irritating–much like the film itself, which is often padded with mediocre material.

While I suppose the sequence where Bowles does nothing but sit there smoking kef and staring into space has some journalistic merit, much of the film’s artlessly extraneous slice-of-life footage does more to irritate than enlighten.

Having already established that Bowles is aging and barely ambulatory, what excuse is there for the endless sequence where Bowles walks into a building? Guided by a servant, he shuffles from his car to the sidewalk–and we’re given close-ups of his feet negotiating the curb. Then he makes his way into the lobby, where he stands by the elevator shooting awkward glances at the camera until the doors open and we watch him amble in and stand there till the doors close.

Even then, the camera continues to hold the shot on the closed elevator doors for an additional several seconds.

The film is crammed with such moments. Thankfully, Night Waltz is also full of indelible moments, unexpected images, and witty, curmudgeonly insights–and the truly unforgettable music of this one-of-a-kind legend.