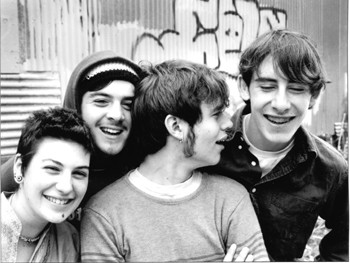 High School Sweethearts: The members of Girls in Suede will be seniors at Santa Rosa and Montgomery high schools next fall.

Girls in Suede epitomize the talent, beauty and truth of the teenaged garage band

Even though the garage door is wide open, it’s swelteringly hot in the practice loft, and midway through a song at Girls in Suede’s final rehearsal of the high school year, lead vocalist Nikos Eliot Flaherty-Laub starts strumming drunk-sounding guitar chords and singing to himself: “Said Nancy’s skeleton / Just say No / Said the Rasta skeleton / Blow Nancy Blow.”

One by one, in the free-for-all spirit that appears to guide Girls in Suede’s every musical step, other band members start toying along with the spontaneous stanza until drummer Eden Mazzola stops the proceedings to demand, “Wait, why are we playing this?”

“I didn’t come up with it,” replies the demure Flaherty-Laub. “Do you know who Allen Ginsberg is? Here, come up with a drum line for it real quick.”

What becomes of these wildly precocious high school garage bands, these kids who casually quote Ginsberg’s The Ballad of the Skeletons, after graduation caps are thrown to the wind? It will be another year before that is an issue for Girls in Suede, and on this June afternoon they are defiantly ignoring the question, opting instead to provide a celebratory noise to the Bennett Valley cul-de-sac while they are still able.

A Santa Rosa band composed of four 16-year-old high school students–two of whom attend Santa Rosa High; two, Montgomery– Girls in Suede have, in the past year-and-a-half, made a splash by being just about as eclectic as possible. Starting with the usual core of close friends, an actual fan base has started to grow around the group. “There’s a whole bunch of new people that we pick up at every show,” remarks bassist Alexis Faulkner.

With summer vacation only one week away, instrumental ideas and zany segues are flying around the hot practice room like last-minute bids at a live auction. In the course of only one song, the band plows through tempo-altering bass interludes, dual guitar hooks, a quasi flamenco section, a sudden stop for a screaming six-count, a synthesizer and violin duet, a spacy reverb harmonic part and a crushing coda resembling something between Ennio Morricone and Neurosis.

Such brazen experimentalism often comes across as pretentious and self-important in the wrong hands, but the members of Girls in Suede–multitalented as they are–don’t take it too seriously. Their artistic brand of rock ‘n’ roll is meant less as a preconceived reaction to the blandness of life than as an unconscious affirmation of life’s possibility–and that is precisely why they are so successful. It also helps that they’re willing to perform just about anywhere.

“We play way too many hippie benefits,” says guitarist Cesco Catania, recalling a loosely organized event where “this crazy girl just grabbed the microphone and started talking about how she was the princess, her family was murdered and how she was gonna fly away.” Another recent evening found the out-of-place band performing at Villa Chanticleer in Healdsburg for a Healdsburg High School dance, where, according to Flaherty-Laub, “all the football players left after they bombarded us with grapes and peanuts.”

Most shows get a better response, such as a recent Battle of the Bands contest at Slim’s in San Francisco, where the band took first place. It’s not often that a brand-new band wins the contest, and Faulkner reveals no special hidden secrets. By way of explanation, the band “had a really good set,” she plainly states. “We had the best time, too. It was packed when we played.”

An amalgam of influences spills out of a Girls in Suede performance, where it is not unlikely to hear a version of John Coltrane’s “Mr. P.C.” after a traditional sea shanty like “Haul Away, Joe.” Flaherty-Laub’s yelping vocals call to mind a younger Frank Black; Faulkner often plays walking jazz bass lines; and Catania’s dreamy guitar style sounds as if it was nurtured on a steady diet of Modest Mouse and Neil Young.

Mazzola is a little more obscure in noting his own influences. “Nick Walsh is one of my favorite drummers,” he declares without explanation. “And Gabe Katz is my favorite drummer, I can say that right now,” he says, referring to the drummer for the Coma Lilies, a band that have shared many local bills with Girls in Suede.

Brimming to the surface of the disparate elements in the band’s music is a unanimous love of funk and soul rhythms. “When I was younger, my mom was getting rid of a whole bunch of records,” says Catania. “I was looking through them and I pulled out Tower of Power, Earth, Wind and Fire and Average White Band. I started listening to those in eighth grade.”

A high school’s student body is a prime captive audience in which to find fans of live music, and Girls in Suede have found widespread support within the halls of academia. Flaherty-Laub boasts that with a band, “you can start cults at school with kids who like you.” As for the other kids? “One kid told me that he was gonna punch me, this kid that only likes rap,” he adds, “but he was being nice about it.”

The summer break will find the band members all over the globe and on short hiatus. Mazzola is going to Costa Rica (“to save baby sea turtles”) and Catania is headed to Arizona and then Italy. Faulkner and Flaherty-Laub will be spending time in Santa Rosa’s sister city of Cheju, South Korea, living with families in the former penal colony turned fishing village. Come August, the band will be playing shows again and brushing off their notebooks for another school year.

After that, it’s hard to tell. If the band does well, all members maintain that they’d like to make a go of it, but a combination of college plans and general restlessness will probably see Girls in Suede headed out of town, most likely separately.

Before he gets into his dilapidated Chevrolet sedan, painted with a sweetly sloppy advertisement for the band’s last show before the summer, Catania sums up the band’s uncertain future. “It’s always kind of sad to think about it.”

Nothing good ever lasts, as the hollow maxim goes, but for the next year, keep your eye on Girls in Suede. The strange and joyful music they so obviously love to create offers a welcome revision to another bitter aphorism, for here, youth is certainly not wasted on the young.