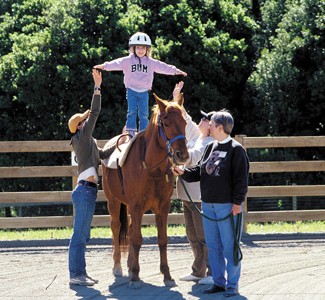 Giant Steps offers a specific yet effective type of therapy

Most of us prefer to perform our gymnastic moves on the ground, if at all. Not Natasha Leach. Natasha suffers from a rare form of dwarfism. Less than three months ago, she couldn’t hop, skip, stand on one leg, or hula-hoop.

Enter Senator. Senator is not a doctor, a physical therapist, a scientist, an educator, or a counselor, and he pulls no weight with the government, despite his name. He can’t even speak. And yet he has produced results in Natasha that her parents consider to be no less than miraculous.

Senator does have a certain something: tall, dark, and handsome, with deep brown eyes and a propensity for intimacy that most people only dream about. Maybe that’s his secret. He’s not people; he’s a horse.

Natasha, who is six years old, was born weighing four pounds and reached only 11 pounds by her first birthday. At age three, she came down with a metabolic disorder that caused severe vomiting, diarrhea, and dehydration that kept her in and out of the hospital for two years. Developmentally delayed, Natasha has been the brunt of children’s jokes. As a result, her parents, John and Ann Leach, noticed a delay not only in the development of her fine and large motor skills but in her emotional maturity and social skills as well.

Fifteen doctors and several forms of therapy later, Natasha, standing three feet and 4 1/2 inches high, was not improving. Then her parents heard of Giant Steps.

Riding has taught Natasha new physical skills that not only improve her balance, but her confidence as well. Ann Leach says, “Feeling good about herself has resulted in a willingness to try new things.” With the ability to focus longer, Natasha has improved academically and no longer requires special assistance.

After showing her classmates a video of herself vaulting on horseback, Natasha’s social stature suddenly rose to new heights. She has matured emotionally. Her mother points out that riding “gives her a lot of power,” allowing Natasha to move from victim to victor. No one can miss the giant spirit within her tiny body.

Robert Pope and Lee Justice, owners and operators of the nonprofit Giant Steps Therapeutic Equestrian Center, may not know medicine, but they know something about the miraculous and the mysterious. They have more tales of transformation to tell than St. Paul ever did. Still, they maintain an awe of the unexplained as they describe those who come to the center broken, beat down, and discouraged, and who leave whole, uplifted, and full of life.

While Natasha is there, Senator belongs to her. She grooms him, feeds him, saddles him, rides him, and loves him. Each client who comes to the center is provided an individually designed program and is matched with a horse that will meet his or her particular needs. And not everyone is invited.

This is a special place for special people. Age does not matter. The center has about 50 riders each week ranging in age from four to 70. Money does not matter. Natasha’s father has been disabled for 10 years and is unable to pay the $30-per-lesson fee for the ten- to 12-week session. Who you know does not matter; in fact, you are not allowed to ride here if you are the brother, sister, mother, or father of one of the participants. What you know is not important: no horse experience necessary. And obviously, size does not matter. To be invited you must have a disability.

Pope and Justice are adamant in their determination to serve their clientele: “It’s the one thing they can do. Why take away the specialness?” Pope adds, “No one rides unless there is a demonstrated therapeutic value. No one rides unless a doctor signs off.”

At-risk children and youth who suffer from emotional trauma are particularly responsive. “Horses tell you everything you need to know. They don’t lie. Kids who have been abused and lied to respond,” Pope says.

Natasha is not the only miracle Pope and Justice have seen. Paul Rose, 16, was born prematurely and with cerebral palsy. Over the years, his inability to bear weight or do full body extensions has brought on the onset of scoliosis and damaged his nervous system. The center uses Tennessee walkers, horses known for their gentle temperament and rhythmic gait. The motion of a walking horse sends neurological signals to the brain and simulates human walking motions in the rider.

After two years at Giant Steps, Paul has improved dramatically, allowing him to cut back his weekly chiropractic adjustments from once a week to every other week. He took his first steps at the center. The deterioration of his spine has stopped and the scoliosis operation has been canceled.

Pope and Justice came to Petaluma to set up their therapeutic training facility through a rather circuitous route. Former high-level executives in Silicon Valley in real estate and marketing, they chose to escape the rat race by moving to Montana. They didn’t know then that the call to live a more meaningful life would lead them back to California.

Determined to be available to as many people as possible in need of their services, the two left their Montana home and Tennessee walker ranch to establish themselves in a more accessible location. But with 50 riders per week, office and facility staff members, certified instructors, physical therapists, and other operating expenses, fundraising is a critical part of Justice’s job.

Although it costs $120 per lesson, clients are asked to pay only $30 of that. And if that is a problem, well, that’s OK. “We ask that they pay what they can. No one is turned away,” Pope says. Volunteers are an essential part of the program. Each rider has three assistants, one leading the horse, and two on each side, in addition to a certified instructor. There are currently 200 volunteers, and room for more.

Justice, the primary fundraiser, attributes much of their success to the generosity of the Sonoma County community. During the center’s first year in operation, Justice was able to obtain grants from seven private foundations. Now ,”five years, three months, and three weeks” later, Justice says proudly, their annual budget of $350,000 is met through the donations of 40 different contributors.

Despite Giant Steps’ luck in fundraising, there are still items on the center’s wish list that have yet to be obtained. Pope and Justice’s biggest wish is for an all-weather arena. They currently conduct lessons in the outdoor arena. However, with some clients who are sensitive to heat and light, it isn’t only rain that can disrupt a session and throw havoc into the already complex scheduling challenges.

Another big-ticket item is for a database program that would allow them to keep track of their various volunteers and other operational records.

The only reasonable question to ask is who benefits most from what Giant Steps has to offer. A teary-eyed volunteer confessed how her sorrow had been assuaged through helping out at Giant Steps. Coming to the center every week helped her let go of the fears and grief she was experiencing over a tragic situation within her family. After coming faithfully every week, things are better now.

Healing is a mysterious thing.

Back in the ring, Pope watches as Natasha rises on one leg, arms stretched out, on the back of Senator who steadily trots around the arena. In contemplation he says, “You wonder what kind of communication goes on.” For the entire hour I watched her ride, performing her vaults, Natasha never stopped smiling.