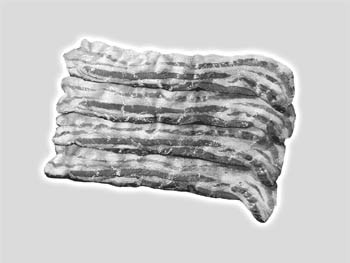 Sizzlin’: Bacon, that most un-PC of lovers, proffers a fat reward.

Confessions of a bacon addict

As if things weren’t bad enough already, brace your lettuce, your tomatoes, and your toasty slices of bread for yet another piece of relentlessly ugly news: We as a nation suffer somewhat silently from a bacon shortage. Retail prices have risen from an average of $2.32 a pound to over $4 as hot slices of fat and meat splatter the fiscal roof.

Commodities brokers and industry journalists blame the shortfall on the uncanny popularity of the stuff as married to cheeseburgers or in the hands of high-end chefs, who apparently sneak it into everything from fudge to ravioli. While we can all applaud the certainty that a bacon crisis has nothing to do with the nation of Islam, some analysts have pointed quavering fingers in one true direction: my house.

Ask any of the cardiologists currently camped out on my lawn, dreaming away the hours envisioning the Bermuda golf trips to be enjoyed after outfitting myself and my two children with pacemakers–we eat a lot of it. While a full 70 percent of you eschew to chew it except at breakfast, we like it three times a day, six on the weekends.

What a happy addition to soups and stews; what a delightful mouth-holiday it provides to grilled cheese; what crunchy-yummy-salty pleasure it gives to a humble pasta. And my, how we’ve grown.

With a weakening economy, things look good for the stout–and stout of heart–at the dented-can food stores, which are currently lousy with three-pound bags of bacon. No shortage there, where high-end chefs fear to tread! And no more separating the skinny fraternal line of brothered rashers–this is a melee, a free-for-all of glistening white-and-pink chewy nubs, a jolly satchel offering a cheerful surprise each time one dips in.

“Bits and ends” the packages boast, not a cheek-to-jowl jostle, but rather anonymous pork backsides begging the pan. After all, bacon as we know it here in the colonies is the plump fatty side of the swine. Canucks like the square middle of the back. Italians prefer it rolled in herbs. And my Lithuanian ex-mother-in-law took with her to the grave a field-plowing idyll that I may one day possibly be able to resurrect. The major ingredients are bacon, mushrooms, shallots, broth, wine, and butter. Is this not a poem?

The phrase “bringing home the bacon” has its own poetic origins. Allegedly born from a 12th-century English custom, great fortune was awarded that uxorious fellow who could truthfully declaim in church that he had not argued with his wife for a year and a day. Such reticence earned the good man the favor of the congregation in the form of a side, or “gammon” of bacon.

Truly, the English are to be admired for their contributions to bacon’s long and illustrious history. Is it a coincidence that both their finest statesman and finest painter shared this noble surname? I think not.

But the English don’t stop with the meat. A nation that can put chips (French fries) between two pieces of buttered white bread and affectionately pronounce it a “butty,” also indulge in that egregiously vein-clogging treat, the “dipper.”

A dipper commences when a perfectly fine piece of ordinary, and preferably stale, bread is rested in hot bacon fat and then swirled out with a fork to be eaten swiftly over the pan. Oh, the curl, the seduction, the sop, the smoke!

As a nation of deniers, we Americans yearn secretly for bacon, having eliminated tobacco, whiskey, Valium, and fresh creamery butter from the collective diet. This obsession with health inexorably leads to that exclamatory moment known as “hellwith,” when the tofu gets tossed, the cruciferous vegetables are damned, and the bulgar becomes simply too vulgar to contemplate. This Private Moment of the BLT causes much unnecessary sadness for poor North American souls.

Do we see the French doing this? Oh no, we do not. The French consume an average of 2.5 bottles of wine per day, per person. They flavor coq au vin with the coq’s blood. Parisian public swimming pools feature Gitanes burning with patient dampness at the end of their lanes. But their bacon intake? Sane, measured, comme çi comme ça, un petite peu. They allow and even celebrate their vices, consuming them in those proud measured amounts that promote long life and happiness.

It’s time to stop the madness and be more like me–an over-the-top pretend French person without a taste for chicken blood. Yes, my porcine passion is a bit de trop for the French, a decidedly more American fervor for excess, a jingoistic bent of which I’m proud.

And as our national tragedy has driven a rush to so-called comfort foods, we need to embrace the common sense that there is little food more comforting than bacon. (The key, evidently, to avoiding such unhappy words as “nitrates” is to slow-cook the strips, avoid burning them, thereby trapping whatever cancer-causing elements within.) Thus prepared, bacon is–to salute Captain Beefheart–as safe as milk.

Safe or not, I frankly don’t care. Bacon is a blood source, in the D. H. Lawrence lust-for-the-groundskeeper sense. Its grease hotly welcomes a quick chop of yellow onions and garlic, the fragrant perfume that seems sweetly and permanently to scent my hair. Creamy spinach pasta simply has no life without bacon. Corn chowder is positively vegetarian without it. Nay, clam chowder too!

The humble salad screams silently for crumbled Gorgonzola, toasted walnuts, fresh pear, dried cranberries, and the salubrious crunch of our topical friend. Green beans can be cooked and served without bacon, but the existential question remains: Why would you? That road leads terribly to cream of mushroom soup and canned shoestring onions.

Perhaps bacon’s greatest allure is in the naive innocence of the cooked stuff, be they proper rashers or the merry jumble from the dented-can store. Draining on a paper towel, unprotected and weary due to the metamorphosis from the cold and oily to the warm and crunchy, bacon trusts that it will find its way to its correct end animating soups, salads, sandwiches, and stews.

How is such faith rewarded? By being pinched savagely up and eaten whole, on the spot, over the kitchen sink. Few of us deserve this responsible cooking honor and far fewer nibs, bits, rashers, or strips survive it. But as my inner French woman would murmur, delicately wiping spots of grease from her chin, “C’est la vie.”