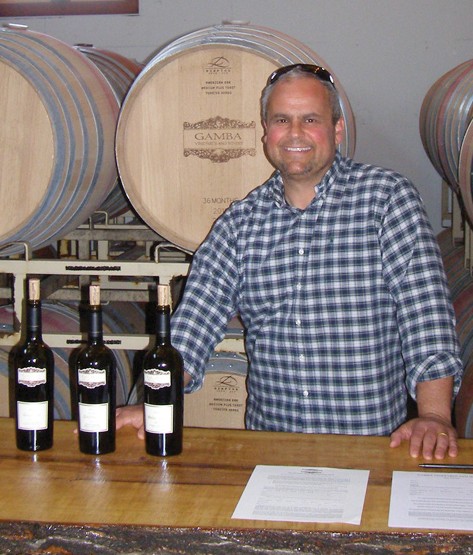 At 113 years old, long in the toothsome Zin

Agostino Gamba may be a sixth-generation grape grower, tending an irreplaceable, century-old vineyard, but he’s clearly no sentimentalist. See what he’s done to his 27-acre vineyard, planted in 1900 by Cesare Barbieri. The silhouette of “old vine Zin” is typically squat, thick-trunked, with gnarled arms flailing wildly—if ever so slowly—in all directions. That’s mostly dead wood, says Gamba, who whittled the “goblet” shaped vines down to their bare essentials, and trained them up on stakes. Not because he wanted to bump up the crop: Gamba’s vines put out a paltry half-ton per acre.

That was nothing to boast about when this vineyard was young, nor when Agostino Luigi Gamba Sr. settled down here in the late 1940s. In fact, the vines can do a little better, but Gamba thins the crop even then, in order to coax the oldsters into producing the big Zin flavors that he wants. And they do.

Gamba only opens the doors by appointment, so, besides low-flying airport traffic, it’s fairly quiet at this little cellar on Woolsey Road. The winery was built in 2007 with FSC certified wood and fly ash concrete, and kept cool by insulation and, on Sundays, tasting room manager Mike Adair’s collection of vintage vinyl. The 2011 “Family Ranches” Russian River Valley Zinfandel ($45) is all toasty, woody and mocha-y; it’s all-American oak for Gamba, who worked for Viansa Winery and Dick Arrowood before creating this “roll out of bed and walk to work” gig for himself 2000.

The “Starr Road Ranch” Zinfandel, aka Moratto Vineyard, has nearly upstaged the home vineyard, after the 2007 inspired a call from celebrity chef Emeril Lagasse. He wanted to feature it with Mario Batali’s “Pork Loin in the Style of Porchetta with Fennel” at Wine Spectator’s celebrity chef event in New York. So there’s that. But it’s the 2010’s ($45) enticing raspberry-and-flowers perfume, graham cracker spice and plush, rich plum fruit flavor that gets my attention. It doesn’t feel hot, but at 16.2 percent alcohol, this isn’t one for the jelly jars.

While the vineyard that Gus grew up in has survived for a hundred years (and likely improved), the corporate-owned vineyard that surrounds it has been replanted three times since he can remember. The “Centuria” dessert Zinfandel is composed of 10 vintages, reserved in the same barrel year after year. It’s fortified, with a refined, sherried nuttiness and smooth, creamy palate, and, to a soundtrack of Ella Fitzgerald on Verve, the talk gets a bit sentimental around here, after all.