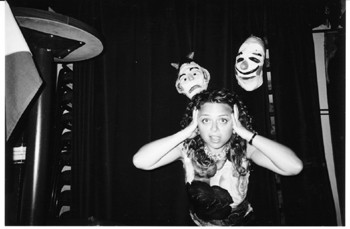 Omigod!: An unidentified actress realizes that this is actually the press photo intended for publication.

From Edinburgh to New York, fringe festivals are a growing phenomenon, springing up anywhere there is a sizable theater community. Essentially, they are edgy, offbeat celebrations of new, independent and marginalized voices; fringe festivals are the theatrical equivalent to the modern film festival. Case in point: Dominican University’s Fringe of Marin Festival, an 11-year-old series of staged short plays by writers, directors and actors from across the North Bay area.

“In this case, ‘fringe’ refers to works by artists who normally aren’t given a chance,” says Dr. Annette Lust, author of the book From the Greek Mimes to Marcel Marceau and Beyond. Lust (rhymes with “roost”) is the festival’s artistic director and coordinator, and the founder of the Dominican University Players.

“In the arts and in theater, the fringe is the outskirts,” Lust explains, “it’s that place out on the edge of the mainstream. The Fringe of Marin Festival gives audiences an opportunity to discover new works, to find undiscovered artists, writers and performers–people who are very, very talented, with interesting, spontaneous voices–and to give those artists important feedback, since many of these works are being performed here for the very first time anywhere.”

In its early years, Dominican’s Fringe of Marin Festival was open to Dominican students and professors only. After several seasons, Lust decided to open up the festival to writers and performers from outside the Dominican community as well. This year’s festival features two complete programs of short plays. Program one includes, among others, Ralf Orth’s The Roach (all about workplace ethics), Steve North’s After the Audition, Pat Milton’s comedic Power Plays and Carlos Rodriguez’s compelling-sounding Manorexia, a play about, ahem, “male heaviness.”

Among the pieces in the second program are Dominican student Autum Brown’s autobiographical My Crown, Geraldine Boyce’s 19th-century farce Does It Really Matter? and Nancy Long’s straightforwardly named Love Story. According to Long, a resident of Petaluma and the published author of numerous short stories, the Dominican fringe festival gives encouragement to local theater artists and playwrights, by offering them the one thing they need most: a theater in which to stage their works.

“What makes the Dominican festival a unique venue,” Long says, “is that it honors local artists and gives us the opportunity to do our thing.”

For a show about prostitution, scandal, betrayal, broken hearts, terminal illness and untimely death, Cinnabar Opera Theater’s current staging of Verdi’s La Traviata is remarkably fun. Under Ellie Lichenstein’s visually oriented direction, every corner of Cinnabar’s small stage is put to use, as lascivious Parisians play, flirt and grope from one side of it to the other.

As the doomed courtesan Violetta, Jillian Khuner literally hits all the right notes, also turning in a first-rate acting performance, often playing several emotions at once as Violetta lets down her professional guard and takes a chance at love. Though ultimately a tragedy, the energy and wit with which the cast and compact orchestra engage Verdi’s music and Lichenstein’s staging ensure that this popular opera is anything but a downer.