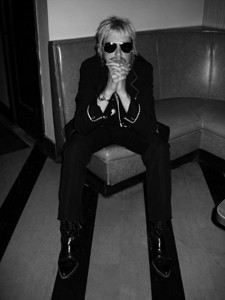 Dave Gleason in a golden state of mind

After his third beer at the Washoe House, Dave Gleason launches into a passionate ramble. It’s a well-intentioned ramble, but a ramble nonetheless, about this dude Robb Strandlund. I’m thinking to myself, Robb who? It’s usually easy for me to ignore diatribes about obscure musicians, but Gleason has such a great knack for it, it’s hard not to hang on to every word. He looks me straight in the eye and oozes pure sincerity about the long-forgotten songwriter who penned the Eagles hit “Already Gone,” and I find myself promising him that I’ll attempt to seek out the incredibly rare Robb Strandlund solo album.

Dave Gleason has earned the attention. I have spent many unforgettable evenings watching Dave Gleason’s Wasted Days, and one particular image has burned into my memory. It’s of the band at the Old Vic jamming through Neil Young’s “Down by the River” with guest drummer Ivan Neville, fresh from a daytime winery show with his brothers. Neville and Wasted Days bassist Mike Therieau played off each other’s energy as if they’d rocked together for years, and Gleason soloed with fire and flash for 16 solid minutes, never losing steam. It was incredible.

As most nightclub-goers know, Dave Gleason’s Wasted Days have a reputation as one of the most exciting live bands in the Bay Area. Gleason himself is a marvel (“The Song Remains the Same soundtrack,” he clues me, “that’s how I learned to play guitar as a kid”), but his band is a sight to behold. Notching roughly 150 dates a year on their leather belts, Gleason, Therieau and drummer John Kent have exacted an amazingly tight knit from their long nights together. Many Wasted Days performances include three sets, plenty of guest musicians and countless cover songs in the NRBQ tradition, but slowly, more and more original tunes have crept into the set over the years. With the release of Midnight, California, the band’s second album of original material, Dave Gleason is establishing himself as a major songwriting talent. In fact, he just can’t stop writing new songs, of which he now claims to have nearly 200.

“It’s taken me a long time to feel like I have something worthy enough to come up with,” says Gleason about his recent flood of songwriting, “but I’m feeling pretty comfortable in my shoes at this point. I’m having a lot of fun now.”

Midnight, California harks back to the great age of California country rock, drenched in beer and covered in tumbleweeds. Simple, Jay Farrar-esque lamentations like “Listen to the Wind” and “Pullin’ Up the Tracks” pepper the album, but the title track shines like a spur in the sand. Odes to California come and go, but Gleason’s own Midnight, California ranks up near the best. With its verses about Highway 99, the San Joaquin River and the proud line “Can’t live in California unless you got some soul,” it deserves a special award from the state tourism board.

Gleason, who credits his dad’s record collection as an early inspiration, speaks of his home state with the wide eyes of a fourth-grader who’s just learned about the gold rush. “I love the history of California,” glows the lean, mustached singer over fish and chips. “It’s gone from the state of Merle Haggard and the highways getting built to where it is now. It blows my mind, and I love it.”

A contagious lust for the heart and soul of California country-rock music lies at the roots of Gleason’s every move, both onstage and off. He has thoroughly explored the Central Valley–“Probably trying to recapture some kind of country-music dream that doesn’t exist anymore,” he confesses–and two years ago settled in Cotati, where he lives in a 1920s house with his girlfriend, Sarah Wirt, and their ducks.

“This is a nice place to live,” Gleason says as we finish our roadhouse food. “Suddenly, I can breathe a little bit better.”

And yeah, I’m still looking for the Robb Strandlund album.