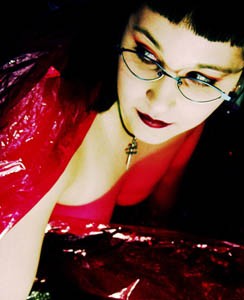 Tangled Up in Goo: As with so many good things, the invention of cellophane was pure accident.

Let us now sing the praises of cellophane

Jenny Compton has recently become a dedicated fan of cellophane. A waitress at the popular Aram’s Cafe in downtown Petaluma, she’s been intimately familiar with the stuff for years, as plastic wrap clearly ranks among the most commonplace item in any restaurant kitchen. Throughout the day, little parades of perishable food ingredients are endlessly wrapped and unwrapped and rewrapped again, each new wrapping underscored by the sharp, sibilant snap-and-hiss of folding, crinkling, overlapping cellophane, snapping cellophane, tearing cellophane, occasional big wads of cellophane lazily unbunching itself on the counter or in the trashcan with the sweetly sizzling sound of a far-off campfire. It’s cellophane city in there, and after so many years engaged up to her elbows in various food-service activities, one can assume that Compton has spent dozens, maybe hundreds, of hours playing with the stuff.

“It’s probably true,” she grins. “I’ve got my hands on cellophane all day long.”

Still, Compton admits that she’s never really thought about cellophane all that much–until two weeks ago, when she and her fellow employees were enrolled in a daylong food-safety class. The class, she says, was all about “washing your hands and not touching stuff”–sensible lessons, to be sure–but during that eight-hour training there was also plenty to learn about the amazing, unsung, transparent, pleasantly-filmy-yet-largely-taken-for-granted plastic product that’s been unobtrusively playing a part in humanity’s existence for almost 100 years.

While certainly good, cellophane’s creation, like vulcanized rubber and the potato chip, was ultimately an accident.

According to historians, a Swiss chemist and textile engineer named Jacques Edwin Brandenberger, working in France in the year 1900, was seated in a restaurant, enjoying his meal, when a particularly clumsy patron spilled a bottle of good red wine all over the pristine white tablecloth. “Wouldn’t it be useful,” he surely thought to himself, “to find a way to make such fabrics waterproof? Stain-resistant? Impervious to the ravages of good red wine?” (Actually, no one know the specific words M. Brandenberger was thinking, but what’s clear is that witnessing the destruction of that tablecloth in that little restaurant was like lightning on his brain.)

By the year 1908–the same year Henry Ford unveiled the first Model T–the Swiss tinkerer had experimented with several different materials in his quest to create repellant tablecloths. Various people had been playing with a derivative of cellulose and alcoholized camphor called “celluloid” at that time. An inventor named John Wesley Hyatt first came up with the stuff in 1868, hoping to find a substitute for ivory in billiard balls, and scientists had been testing out other applications ever since. Ultimately, Brandenberger tried applying liquid viscose (a cellulose material derived from wood or cotton fibers) to the fabric, but the viscose only acted as a stiffening agent, making the tablecloths difficult to fold but certainly no safer from cataclysmic spillage.

Worse yet, the stuff wouldn’t stay affixed to the cloth; the plastic coating kept sloughing off in great big sheets of thin transparent film. Like any good inventor, Brandenberger eventually gave up on saving the tablecloths of France, having realized that the weird byproduct of his failed experiments was a lot more interesting.

His next task was to develop a machine that could produce regenerated cellulose in attractive, see-through sheets. It took him nearly 10 years, but by 1908 the world’s first cellophane machine was born. The process employs an alkaline solution of viscose, extruded through a very narrow slit into a bath of acid. The acid regenerates the celluloid, resulting in a thin film. After the additional processed of washing and bleaching the material, it becomes cellophane.

Having perfected the machine, Brandenberger only needed to find a practical use for the product it made. By 1912 he had formed a company, La Cellophane–combining the words “cello” from “cellulose” with “phane” from the French word diaphane, meaning “transparent”–and had begun producing and selling thin cellulose film to be used in the manufacture of gas masks. By the time it became available to the general public, cellophane was being produced by several companies in France, each finding neat new uses for it, and the excitement surrounding the material was so high that an organization, La Cellophane Société Anonyme, was formed to promote and explore its potential.

This had a remarkable effect on the food industry. With cellophane wrapping suddenly available to keep bugs out of products like candies and chocolates, such treats could be shipped across the country. The omnipresence of the Whitman’s Sampler owes a lot to Brandenberger and his invention. Today, according to the National Plastics Center and Museum in Leominster, Mass., cellophane is produced in more than 2,000 forms. In addition to having revolutionized the medical world with the various sanitary applications of sealable bags and other products, cellophane changed the way people cook and eat. Leftovers suddenly became feasible and safe to eat a few days after that first meal. It is difficult to imagine a modern-day kitchen without a roll or two of plastic wrap banging around in the pantry.

Nearly 100 happy years after its arrival on the scene, cellophane continues to evolve as scientists and inventors find ways to improve upon Brandenberger’s flexible invention.

Jennifer Barnhart, a media representative for the Glad Products Company, a subsidiary of Clorox Inc. in Oakland, Calif., is paid to be excited about plastic wrap, and she does her job well. When reached by phone, she seems genuinely thrilled to be talking about a favorite subject. She knows, for example, that a sheet of Glad Cling Wrap is exactly .5 millimeters thick.

“Are you familiar with our newest innovation?” Barnhart cheerfully asks. “As much as your may love plastic wrap, you have to admit you also have a few frustrations with it, don’t you? Some people are frustrated because plastic wrap, while it’s very good at clinging to itself, hasn’t always been good at clinging to other surfaces. When a Tupperware container is missing a lid, for example, plastic wrap isn’t always good at covering the container, because it won’t cling to the plastic surface.”

Glad’s newest product, she enthusiastically explains, is a sealable wrap, chemically engineered to seal to practically any surface, merely by pressing against the wrap. “Regular wraps cling,” she says. “[This] actually seals.”

Asked to muse upon the vast social significance of plastic wrap and other cellophane products, Barnhart’s professional observation is sweetly succinct.

“Cellophane,” she says, “has clearly made a lot people’s lives easier, in and out of the kitchen.” And finally, asked to speculate as to what Jacques Brandenberger would think about Glad’s latest twist on his invention, she says, “I don’t know, but I bet he’d like it.”

Of course he’d like it. But he’d probably have one burning question: “How does this stuff work on tablecloths?”