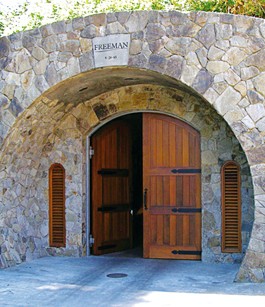 Rundown, neglected and heaped with trash, this little winery had seen better times when the Freemans happened upon it. Built as a hobby by a successful type in the late 1970s, it passed through several hands after the original owner found the vicissitudes of the vintage too much to bear. Eventually, it fell into disrepair, hidden in a grove of redwood and eucalyptus on a narrow lane west of Sebastopol, and along came the Freemans. Ken and Akiko—he, a successful executive-to-be crewing on a yacht; she, the daughter and granddaughter of avid Burgundy collectors in Tokyo—were looking for a weekend retreat, and dove into a new calling.

With a bright coat of rust-brown paint, spotless crush pad and flawless lawn, the winery looks brand-new, now accessorized with a horseshoe-shaped cave. And with the help of consulting winemaker Ed Kurtzman and assistant winemaker Eric Buffington, it’s giving back the love.

Having owners who appreciate the work that goes into the product is nice, says Buffington, an affable Santa Rosa native. Akiko pitches in every day during the harvest, on the sorting table and in the cellar, asking her employees, “What do you want me to do next?” Since they’ve bounded from 500 cases in the flush early 2000s to 4,000 cases in the changed wine market of today, everyone hits the road to meet with accounts, sometimes bumping into their neighbors in the middle of Texas.

The 2008 Russian River Valley Ryo-fu Chardonnay ($40) bears the symbols for “cool breeze” in kanji. Toasty new oak and a high-gloss entry signal a big wine; lemon meringue and zesty minerality keep the finish focused. Cedar, forest floor and spice head up the 2008 Sonoma Coast Pinot Noir ($41); the mouthful of fresh red cherry fruit has clean acidity. The 2008 RRV Pinot Noir ($41) has gorgeous, silky cherry fruit, to be sure, but a more herbal aroma of potpourri and tea, with a mandarin orange twist.

Most curious, the wines at the end of the list, billed as bigger, I find lighter. The 2008 Keefer Ranch Pinot Noir ($46) is a damp fog of cranberry, cherry, chalk and watermelon candy; the 2008 Akiko’s Cuvee ($52) is light and teasing, with aromas of cherry, vanilla and beeswax, and lean, crisp flavors of cranberry, cherry and raspberry over distinct tannin. Perhaps, like this lucky little winery, it will achieve its best expression in due time.